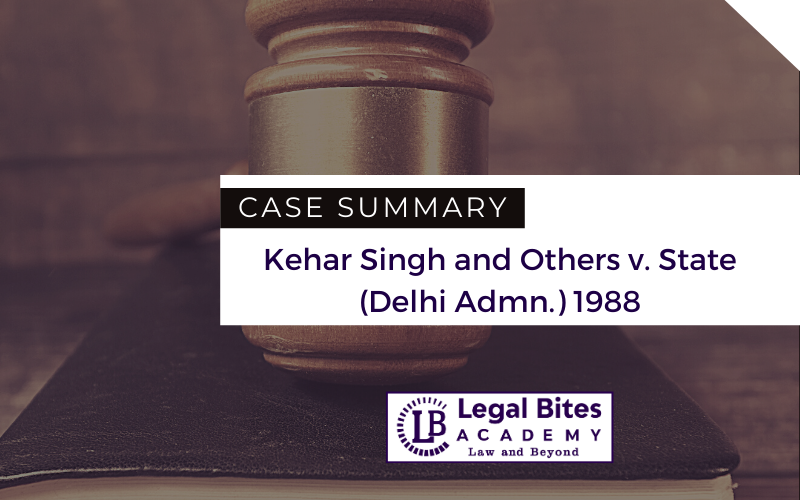 Kehar Singh case is also known as the Indira Gandhi murder case, the present case bases its arguments on the essential structure of the constitution on the rights of the accused. In the case of Kehar Singh v. State, the facts suggest that Kehar Singh was indicted for homicide and connivance for the death of the then Prime Minister of India, Indira Gandhi, and he was condemned to death.

The case talks about the validity of the constitutional rights of the accused under Article 21 of the Constitution to have access to fair, just, and open trial, and it also analyzes the power vested with the High Court to direct trial of a case or place other than the usual seat of the sessions court.

The author has attempted to provide a case summary of the case for the readers. Since the case is important from the point of view of competition exams, the author has tried to list all the necessary facts, the main issues involved, and the judgment of the court so that readers have the required knowledge about this case.

Appellant: Kehar Singh and Others

II. Factual Background of the Case

Arguments of the Appellant

The matter reached before a 3-judge Supreme Court’s bench which consisted of Oza G.L., Ray B.C., Shetty K.J. who has given below outlined observations:

The rule of law which was under scrutiny by the Hon’ble Supreme Court was of the proof as to the criminal conspiracy to murder. To conclude, it can be said that the Supreme Court in the present case delivered justice by establishing the provisions of the constitution and validity of rights guaranteed under the constitution along with the witness testimony. It is however undisputed that the present case was a concern for the whole society and the verdict was precisely delivered by the court.