This article titled ‘Bail Application: Step-by-Step Guide and Sample’ is written by Mayank Shekhar and provides a step-by-step guide to filing a bail application along with samples. Bail was introduced in England for the very first time. After being influenced by India, this idea was established. Since the 1948 United Nations Declaration of Human Rights, the idea of bail… Read More » 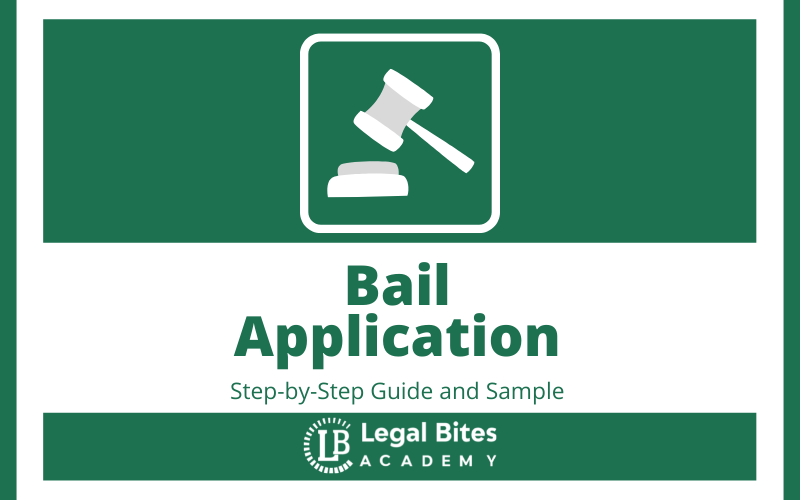 This article titled ‘Bail Application: Step-by-Step Guide and Sample’ is written by Mayank Shekhar and provides a step-by-step guide to filing a bail application along with samples.

Bail was introduced in England for the very first time. After being influenced by India, this idea was established. Since the 1948 United Nations Declaration of Human Rights, the idea of bail has been included in the scope of human rights. In its 41st report, the Law Commission made recommendations to parliament, which parliament analyzed and incorporated into the Criminal Procedure Code of 1973.

The legislation on bails was constructed around the structure of fundamental beliefs of personal liberty to assure that they are concisely impacted and a versatile system suited to maintain community attention via judicial discretion. The method seems to be consistent with the bail institution’s policy and objective.

The term dates back to the ancient French verb ‘bailer,’ which implies, “to give” or “to convey”.

Bail is the release of a person from custody who is charged with any crime penalised or criminalized in exchange for a sum of money promised in exchange for the accused’s presence in court when the time comes. The individual who makes the payment serves as the surety. In a civil case, getting bail is one of the accused’s rights, while in a criminal case, it falls within the discretion of the bail issuing authority.

II. Types of Bail under CrPC

There are three types of Bail constituted in the Procedural code of conduct in the Indian Legal System.

When a person commits a cognizable non-bailable offence (one that is so trivial in nature that a police officer had to make the arrest of the accused without a predetermined warrant or begin an inquiry without the legal authorization of the court of law), the police has the right of taking him into custody, and he must be sent to prison when the custody term ends.

The accused has the right to be freed from such detention and be granted bail under sections 437 and 439 of the Criminal Procedure Code. Henceforth, a normal bail is the release of an accused under trial from the prison in order to guarantee his appearance during the court proceedings.

This bail is issued as a temporary measure for a limited length of time, either while an application is pending or while an anticipatory or normal bail application is pending before the court of law Interim bail is majorly conditional and can be prolonged; however, if it ends before the accused has been granted anticipatory or regular bail, and the individual fails to pay the amount necessary to pursue the bail, he surrenders his right to freedom and will be remanded into prison.

The term “anticipatory bail” is self-explanatory. It is a kind of bail that is granted to someone who is expecting to be arrested by the police for a non-bailable offence. In recent years, this has become a very crucial subject since economic rivals and other influential people often attempt to frame their opponents in trumped-up charges. This is a type of advanced bail specified under the Act’s Section 438. The police will then be unable to arrest someone who has been granted anticipatory bail.

When a person seeks bail for the crime he/she has been convicted of, the accused must submit an application in the form of Form-45, which may be found in the second schedule. This application will be submitted in court where the case procedures will be heard with the assistance of your lawyer. The court will only grant bail if it deems appropriate. Bail cannot be granted without an application seeking the same. When a person has already been convicted and is appealing to a higher court, he may seek bail at this period.

Bail is an essential check and balance that ensures no one is punished until they have been proved guilty. However, the country’s criminal justice system’s complex bail system often fails to recognise it. Bail is granted or denied based on considerations that have nothing to do with the case’s merits.

The Law Commission’s suggestions on bail changes in its 268th report are essential, and they should be implemented so that our criminal justice system develops into a fair and transparent bail system. This would go a long way toward preserving the Indian Constitution’s guarantees of life and liberty.

Sample Draft of a Bail Application