Introduction Recently the right to privacy judgment given by Justice DY Chandrachud overruling the principles evolved in the Habeas Corpus case in the case of Justice Puttaswamy and Ors. v. Union of India (Writ Petition (Civil) No 494 of 2012), evolved as a landmark judgment in the history of India with regards to the status of Right to… Read More » 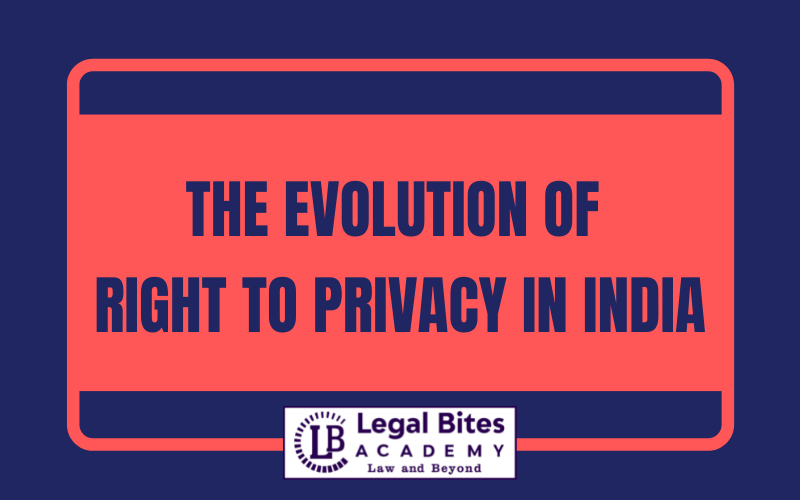 Recently the right to privacy judgment given by Justice DY Chandrachud overruling the principles evolved in the Habeas Corpus case in the case of Justice Puttaswamy and Ors. v. Union of India (Writ Petition (Civil) No 494 of 2012), evolved as a landmark judgment in the history of India with regards to the status of Right to Privacy. This article shall envisage the origin of privacy and judicial developments on privacy.

In 1859, John Stuart in his essay “On Liberty” gave expression to the need to preserve a zone within which the liberty of the citizen would be free from the authority of the state. In late 1890, Samuel D Warren and Louis Brandeis stipulated the need for the right to enjoy life which included the ‘right to be alone’. The right “to be let alone” thus represented a manifestation of “an inviolate personality”, a core of freedom and liberty from which the human being had to be free from intrusion. It justified the need of being left alone with the early developments in technology, photography, and newspaperization.

The intention behind it introduction of such a principle was to protect personal writings and personal productions, not only from theft and physical appropriation but against publication in any form which might not be consensual in nature. Hence, at the time when development and technology change started threatening the individual in public gaze, many eminent jurists regarded the right to be let alone as an added chapter in the law of privacy.

Early developments in the history of privacy saw two landmark judgments – the 8-judge bench decision in M.P. Sharma v. Satish Chandra (1954 SCR 1077) and the 6-judge bench decision in Kharak Singh v. State of U.P. (1964 (1) SCR 332 ). In M.P. Sharma, the process of search and seizure was challenged as it violated Article 20(3) of the Constitution of India. In Kharak Singh, the court dealt with UP Police Regulations which provided for secret picketing, domiciliary visits, periodical inquiries, reporting of movements and collection of records of history-sheeters, violating Article 21 of the Constitution of India. In both cases, the court dismissed the existence of the fundamental right to privacy envisaged in the constitution.

However, it shall be noted that in both the cases the petitioner’s arguments relied on the A. K. Gopalan Case which enumerated that Article 19 and Article 21 are mutually exclusive. The case has been overruled and considered bad in law after the landmark R. C. Cooper Case (1978) 1 SCC 248) in which the court discarded the theory that fundamental rights are water-tight compartments. Hence, by virtue of this, principles enumerated in Kharak Singh and M. P Sharma should also be overruled.

This was also re-strengthened by Maneka Gandhi v. Union of India (1970) 1 SCC 248), in which court ruled that enumeration in Article 19 does not deprive Article 21 of its expansive ambit. While analyzing the discordant view in the ADM Jabalpur case, the court held that the constitution is not the sole repository of life and liberty. Even if the rights were not granted under Article 21, the state would not be permitted to suspend such rights. For example, as under the 44th Amendment, Article 359, even in an emergency, the power to move to the court for enforcement of rights shall not be suspended for Article 20 and 21.

Later, three judgments saw and acknowledged privacy as a constitutionally protected fundamental right, namely, Gobind v. State of Madhya Pradesh (1975 2 SCC 14), PUCL v. Union of India (telephone tapping case) and R. Rajagopal v. State of Tamil Nadu (1994) 6 SCC 632) (Court dealt with a conflict between the freedom of the press and the right to privacy). However, all three judgments were of smaller benches and left the stakeholders in dilemma with regards to the interpretation of Privacy under Article 21 of the constitution of India or not. In Rajagopal Case the court held that the right to privacy has two aspects: the first affords an action in tort in damages for the unlawful invasion of privacy, and the second is a constitutional right.

In the Puttaswamy case, the arguments before the courts (Respondent) were [A] very few people are affected by the right to privacy [B] Privacy was rejected as a fundamental right in constitutional debates [C] the statutory protection to privacy exists, and hence there is no need to make it a constitutional right [D] Privacy is still an elitist construct [E] Privacy is common law right, not a fundamental right [F] Substantive due process is not granted in the Indian Constitution and [G] Privacy is a civil liberty, not a” personal liberty” as in Article 21.

However, the petitioner’s arguments on the same were that privacy is a natural and inalienable right, individuals have right to informational privacy, privacy is a concern against the state and non-state actors and privacy have always been legislatively recognized in India vide section 5, Indian Telegraph Act of 1885; Section 26, Indian Post Office Act 1898 and Section 8(1)(i) of Right to Information Bill, 2011 to much later, Privacy Bill, 2011.

There have been many criticisms of the said doctrine, Thomson’s Reductionism theory stipulates that the right to Privacy has been derived from other rights such as the right to property and bodily security, so it should be best understood as a derivation of other rights and must be interpreted accordingly. Early few articles, published in Havard Law Review also saw the idea that the scales of balancing state and personal interest must tip in favour of the national need for knowledge, innovation, and development.

Thus, there shall be no such hindrances like privacy which is tilted towards personal interest over national need. The idea of privacy was also criticized by the feminist saying that privacy should not be a cover to asset patriarchal mindset and state must take issues like domestic violence in the private sphere seriously. These ideas left the status of interpretation and extent of use of the idea of privacy in dilemma.

However, Supreme Court while giving the directions in the said judgment relied on the literature which defined some specific principles on privacy such as decisional autonomy, spatial control, and informational control. On analyzing the diagram, in the Indian context, the fundamental right to privacy should ideally deal with [A] privacy of the person and body; [B] informational privacy and [C] autonomy in consonance to the Articles 19(a)to (c), 20(3), 21 and 25.

All in all, the court didn’t find any contravention with regards to international conventions and the national legislative decisions and recognized the need for constitutional validity of the said right. India is already a signatory to the 1948 UN Declaration of Human Rights, wherein Article 12 speaks on the Right to Privacy. Treaties must be respected vide directive principle 51(c). The preamble to ‘Necessary and Proportionate Principles’ also insist on this right.

However, post the judgment the judicial system of India still needs to deal with the subject like Aadhar and application of the said right. It will now be easier for courts to decide on factors like usage of biometrics, phones in light of privacy, however, another pertaining question to it is whether the concept of Aadhar is violative to the right of privacy or the way government has planned to implement it. These questions will be dealt with in the case which Supreme Court shall be hearing soon.