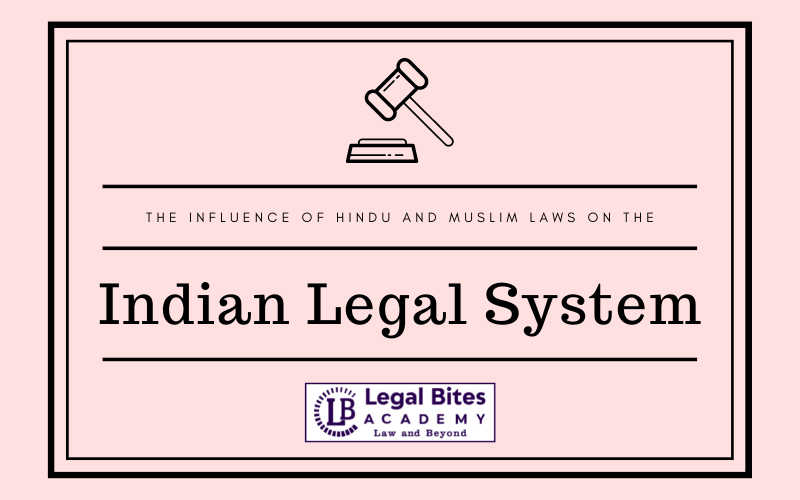 This article titled ‘The influence of Hindu and Muslim Laws on the Indian Legal System’ is written by Antariksh Anant and discusses the influence and impact of Hindu and Muslim laws in shaping the Indian Legal System. I. Introduction The Indian legal system is an innovative blend of Hindu, Islamic, English, and other elements with a long and varied history. The subcontinent was controlled by Hindu civilizations until Muslims conquered the area in the 12th century AD, ushering...

The Indian legal system is an innovative blend of Hindu, Islamic, English, and other elements with a long and varied history.

The subcontinent was controlled by Hindu civilizations until Muslims conquered the area in the 12th century AD, ushering in an era of Islamic supremacy.

Following that, the English came to rise and taken power of the subcontinent, imposing their own institutions and laws. Consequently, the Indian system we see now is perplexing, enshrining key elements of all three eras’ systems. Muslim Law has existed in India for centuries, and it has been subjected to several modifications and restrictions throughout that time. Personal Law, which has been changed and has remained an important element of Indian society, has judged particular civil concerns such as marriage, inheritance, and property transfer.

Religion is the cornerstone of our society of human society, as it is more than just a set of beliefs; believers of a specific religion engage in a specific type of livelihood. Having morally obligated to follow certain rules, religion crosses the line into the realm of law, where an individual is obligated to follow or not to abide by the rules set by the state (i.e. any country). As a consequence, it is clear that religion and law are intertwined, because prior to the inception of state or democracy, individuals were obligated to observe pious duties and could claim religious rights.[1]

Legal history, often known as law history, is the study of how the law has evolved and why it has changed. The evolution of civilizations is interwoven with legal history, which is placed within the wider context of social history.

It has been described as the recording of the progress of laws and the technological interpretation of how these laws have grown by jurists and legal process academics with the objective of better understanding the nature of various legal ideas; some regard it as a part of literary tradition. In the twentieth century, historians understood legal history in a more contextualised way, more in line with the views of social historians. [2]

They viewed institutional structures as a complicated set of rules, participants, and symbols that engage with society to modify, adapt, reject, or support specific characteristics of civilized society. Such legal scholars have a tendency to examine case histories through the perspective of social research methods, employing statistical methodologies to examine class differences amongst litigants, appellants, and other participants in various judicial processes.

They have initiated an investigation of legal systems, practises, procedures, and pleadings that gives us a more nuanced picture of the legal system than the study of jurisprudence by evaluating differences in results, trading costs, and the amount of resolved disputes.

The term “Law of India” in common usage, means the legal system in place in India today. Owing to the long era of Colonialist dominance under the British, it is primarily adopted from English common law. Much of today’s Indian law is majorly adopted by European and American law.

Several British-enacted laws are in existence even today, albeit in slightly changed form. Laws from Ireland, the U.S., England, and France all were synthesised during the making of the Indian Constitution to produce the sophisticated collection of Indian laws that exists today. Legal provisions also follow UN principles on rights and environmental law.[3]

Religious ideology, particularly that espoused by the Hindutva movement, has had a considerable effect on Indian politics in the last quarter of the twentieth century. Many of the elements that support India’s casteism and communalism arose during the British Raj, particularly in the late nineteenth century, when religion was regularly politicised by the government and others.

Because it established separate Hindu and Muslim electorates for the Imperial Legislature and provincial councils, the Indian Councils Act of 1909 (also known as the Morley-Minto Reforms Act) was extremely divisive. It was blamed for inflaming tensions between the two factions.[4]

The Indian Constitution provides affirmative action safeguards for particular groups of the population due to the persecution of the lower castes. Due to rising discontent with the Hindu caste system, many Dalits (also known as “Untouchables”) have converted to Buddhism and Christianity in recent decades.

As a result, the Bharatiya Janata Party (BJP) has adopted legislation to make conversions more difficult, saying that such conversions are usually forced or allured. The BJP, a Hindu nationalist party, obtained momentum after its leaders allied themselves with the Ram Janmabhoomi campaign and other important religious movements.

Among the most prevalent allegations levelled by Indian political parties towards their rivals is that they participate in populist politics, in which they support issues merely to garner votes from members of a certain group. Both the Congress Party and the Bharatiya Janata Party have been charged with using vote bank methods and influencing the public.

There was a lot of outrage when Congress was accused of pandering to Muslim conservatism by introducing a legislative amendment to overturn the Supreme Court’s decision in the Shah Bano divorce case. Political parties were accused of using vote-bank methods in the aftermath of the Gujarat riots in 2002.

During an election campaign in Uttar Pradesh, the BJP released an inflammatory CD targeting Muslims. This was criticised by the Communist Party of India (Marxist) as the worst sort of vote-bank strategy. Caste-based politics are also prevalent in India; caste-based discrimination and reservation are still contentious issues.

The Constitution of India, which went into force on January 26, 1950, is the world’s longest written constitution. Although its organizational rules are mostly adopted by the Government of India Act of 1935, it also has laws borrowed from other constitutions across the world at the time of its formation.[5]

It outlines the management of both the Union and the states and codifies the relationship between that of the State and Central governments.

Chapters on citizens’ basic rights, and a chapter on state policy direction principles, are also listed in the book.[6]

The constitution establishes a federal government structure with a clear distinction of executive and legislative branches responsibilities between the Centre and the states. Every government at the state level is free to write its own laws on issues categorized as state matters.

The Indian Parliament’s legislation, as well as other pre-existing central laws on topics classified as central, are binding on all citizens of the country. The constitution does, however, contain several unitary aspects, such as the capacity of the Federal Government to change itself, the absence of dual citizenship, and the National Government’s dominant influence in moments of emergency.

In India, family rules vary according to religion, and there is no universal civil code. When Warren Hastings created rules for personal litigation prescribing Hindu law for Hindus and Islamic law for Muslims in 1772, it was under the British administration in India that this system of different laws for each denomination emerged.

Islamic jurists created a number of significant legal organisations throughout the classical period of Islamic law and jurisprudence, known as the Islamic Golden Age, which spanned from the 7th to the 13th centuries. One of these organisations was the Hawala, an early informal value transfer mechanism documented in Islamic legal literature as early as the 8th century. Hawala inspired the creation of the Aval in French civil law and the Avallo in Italian law. The concept of res judicata in civil law, as well as “European commenda” limited partnerships (Islamic Qirad), may have its origins in Islam.[8]

In India, personal regulations for Muslims are based on Sharia, which is only partially applied. The personal law component of the fiqh that pertains to Indian Muslims is referred to as Mohammedan law. Despite the fact that Mohammedan law is mostly uncodified, it will have the same legal legitimacy as other codified laws. The law has evolved largely as a result of judicial precedent, which has lately been scrutinised by the courts. In the field of statutory and personal law interpretation, Justice V.R. Krishna Iyer made a significant contribution.[9]

Hindus are subject to a separate body of legislation known as Hindu Law. Although the first parliament after independence failed to adopt a Hindu Code that covered the entire subject of Hindu family law, laws addressing all of the major concerns affecting Hindu family life in India could be approved. Jains, too, are largely protected under Hindu law.

In history, the term ‘Hindu’ has a foreign origin. It referred to people living east of the Indus River, which is today known as the Hindi. In terms of etymology, the term “Hindu” refers to all Indians, regardless of caste or religion.[10]

Over time, the term Hindu has come to be associated with religion. As a result, the word “Hindu” is logically applied to those who are Hindus by birth and faith, but this is the foundation for the implementation of Hindu Law. Hinduism, Islam, and Christianity all have divorce laws.

The nature and evolution of marriage as an institution, as well as capacity and nuptial rights, and the consequences of invalid and voidable marriages under the legal systems described. Hindu marriage and divorce law has undergone changes as a result of modern legislation.