RERA and its Comparative Study 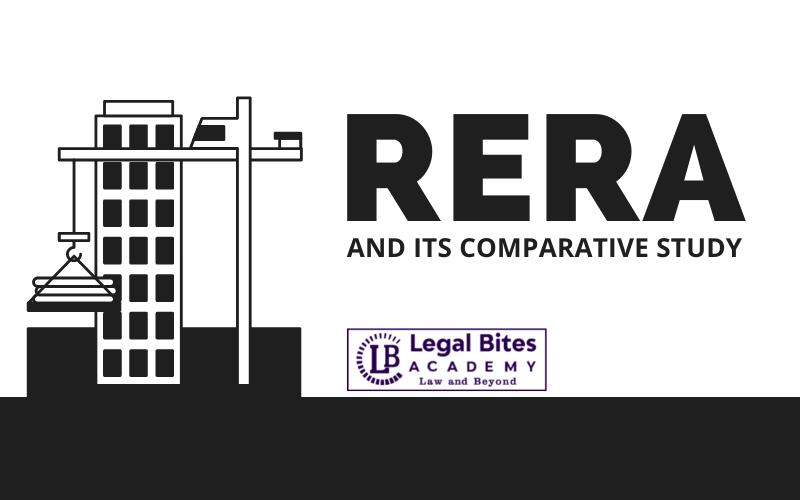 This article titled ‘RERA and its Comparative Study.’ is written by Md. Ali Imran and brings out a comparative study of Real Estate Regulatory Authority.

RERA stands for Real Estate Regulatory Authority which came into existence as per the Real Estate (Regulation and Development) Act, 2016 with an objective to provide ease and comfort for the homebuyers.

The aim of RERA is to protect the home purchasers and to bring in transparency and accountability in the real estate sector by creating a mechanism to address issues such as delay in project completion and delivery, full disclosure of all the details, and grievance redressal by safeguarding the interests of buyers as well as the developers[i].

The act and the subsequent rules were brought to eradicate the existing discrepancies and problems within the sector and to bring transparency & accountability in the real estate industry.

Section 84 of the Act provided that within a period of six months from its commencement date, State Governments will set the rules to carry out the provisions associated with the Act. Under the RERA, it is mandatory for each state and UT, to form its own regulator and frame the rules that will govern the functioning of the regulator and actively work towards solving complaints and disputes in each state. More than 65,000 cases have been disposed of since RERA was enacted.

As of now, According to the Ministry of Housing and Urban Affairs, 34 States/UTs have notified rules under RERA as of 09 January 2021[ii]. A total of 30 States/UTs have either established their permanent or interim regulatory authorities.

RERA has brought a revolution in Real State Sector. Following are some benefits[iii];

III. Projects which come under RERA

The project which is only for the purpose of renovation/repair/re-development which does not involve re-allotment and marketing, advertising, selling or new allotment of any apartments, plot or building in the real estate project, will not come under RERA.

Any aggrieved person, (a buyer, agent, or developer) can make a complaint to the respective State RERA if there is a violation of the provisions of the respective act or the rules. Section 31 of RERA provides that the complaints can be filed against promoters, buyers, or agents. And if they aren’t pleased with RERA’s decision, a complaint can also be filed with the Appellate Tribunal.

In Imperia Structures v. Anil Patni[iv], The Supreme Court (SC) has ruled that aggrieved homebuyers can take their cases to both, the state’s real estate regulatory authority, as well as the National Consumer Disputes Redressal Commission (NCDRC), since their jurisdiction is concurrent.

In Bikramjit Singh v. M/s HP Singh[v], the Punjab RERA held that RERA does not extend to projects whose application has been rejected by the authority. Further, it was also stated that complaints against projects not registered with RERA will not be entertained by the authority.

In this judgement, the authority also clarified the maintainability of a complaint in those cases where the violations occurred before the act was enforced. It was stated that such complaints would be entertained only if three conditions were fulfilled-

In Avinash Saraf v. Runwal Homes Pvt Ltd[vi], Maharashtra RERA held that RERA has jurisdiction even for agreements executed before RERA was enacted since the cause of action has survived even after RERA came into force. Further, it held that possession without a certificate is illegal. The authority granted the complainant a full refund along with interest and the cost of the complaint.

In Vinod Agarwal v. Jaipur Development Authority(JDA)[vii], the Rajasthan RERA in a landmark decision held that the RERA Act is mandatory in nature. Rajasthan RERA ruled that all rules and regulations under the Act would be applicable to the project which is registered under it and directed JDA to execute the sale agreement before demanding an additional amount. Section 13 of the Act mandates the execution of the sale agreement.

Violation of laws by the promoters can lead to imprisonment for up to 3 years or cost them 10% of the project’s estimated cost. Penalties for non-compliance with RERA are provided in sections 9 (7), 62, 65, 66 of the Act.

There is no such specific Act like RERA in the UK which governs the real estate business. Real estate in England and whales are mainly governed by 2 main pieces of legislation: the law of property act 1925 and the law registration act 2002.[viii]

The 1925 act introduced major reforms to pre-existing real estate law in order to and modernise and consolidate it. It is wide-ranging and establishes general principles, such as the estate and interest in land that can exist at law.

Ownership of the land and many of the rights and burdens, which affect it must be registered at the Land Registry, a government agency. The registration regime is set out in the Land Registration Act 2002 and accompanying regulations. There are also additional statutory provisions relating to real estate transactions but not a specific act like RERA.

V. Laws pertaining to real estate in the USA

In the United States of America, every state follows a combination of statutory and common laws. The laws in the USA are structured in the following 3 ways:

As per the Common law system, when it comes to bringing changes in laws, equal weight is given to judicial precedents and new legislations. Courts generally rely on the document’s express provisions unless the parties’ intent is ambiguous. Contracts for the sale or transfer of real estate should always be concluded in writing.

The Real Estate Settlement Procedures Act, or RESPA, was enacted by Congress to provide homebuyers and sellers with complete settlement cost disclosures. The Act was also introduced to eliminate abusive practices in the real estate settlement process, prohibit kickbacks, and limits the use of escrow accounts.

RESPA is a federal statute now regulated by the Consumer Financial Protection Bureau (CFPB).[ix] In the USA, RESPA is just like RERA.

For a long, home buyers have complained that real estate transactions were lopsided and heavily in favour of the developers. RERA and the government’s model code, aim to create a more equitable and fair transaction between the seller and the buyer of properties, especially in the primary market. RERA, it is hoped, will make real estate purchases simpler, by bringing in better accountability and transparency.

The RERA will give the Indian real estate industry its first regulator. The Real Estate Act makes it mandatory for each state and union territory, to form its own regulator and frame the rules that will govern the functioning of the regulator.

There is no such specific Act as RERA in the UK which governs the real estate business in the state. And in the United States of America, every state follows a combination of statutory and common laws. RESPA is one of them which acts like RERA.

[i] PAVITHRA K M, Here are some of the important orders by RERAs in different states, Factly, Available Here, last seen on 26/10/2021.