An Overview of the Limitation Act 1963

The Limitation Act, 1963 came into force with effect from 1st January 1964. It was enacted to consolidate and amend the law for the limitation of suits and other proceedings and prescribes different periods of limitation for suits, appeals, and applications. The Act applies to all civil proceedings and some criminal proceedings. It has been held that the… Read More » 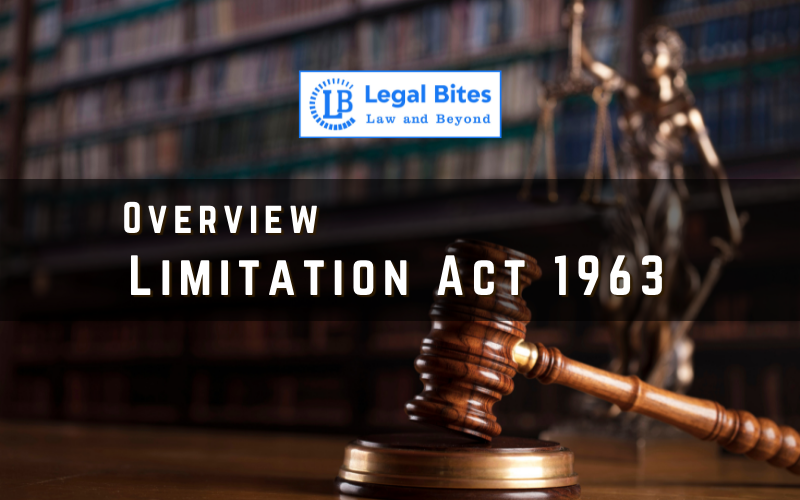 The Limitation Act, 1963 came into force with effect from 1st January 1964. It was enacted to consolidate and amend the law for the limitation of suits and other proceedings and prescribes different periods of limitation for suits, appeals, and applications.

In 1859, for the first time, an attempt was made to introduce uniformity in The Law of limitation the Act XIV of 1859 was enacted, which was applicable to all the Courts. The Limitation Act was subsequently repealed in the years 1871, 1877, 1908. The Limitation Act, of 1908 was repealed by the Third Law Commission and the Limitation Act of 1963 came into force.

Objectives & Structure of the Limitation Act, 1963

The objective of the Limitation Act, 1963

Structure of the Limitation Act, 1963

The Limitation Act contains 32 Sections and one schedule containing 137 Articles.

The Sections are divided into five parts:[5]

The Schedule containing 137 Articles prescribes the period of limitation:

The limitation act is a consolidating and amending statute relating to the limitation of suits, appeals and certain types of applications to the courts and therefore must be regarded as an exhaustive code governing law of Limitation in India and the Indian courts are not permitted to travel beyond its provisions to add or supplement them A.S.K. Krishnappa Chettiar v. K.S.V.V. Somaiah, [AIR 1964 SC 227]. It is not a substantive law but procedural law.

Bar of Limitation and its Exceptions

The limitation act is applicable to suits brought by the plaintiff, it does not apply to a right set up by the defendant in defence.

Section 3 (1) of the Limitation Act, 1963 provides that any suit, appeal or application if made beyond the prescribed period of limitation it is the duty of the Court not to proceed with such suits irrespective of the fact whether the plea of limitation has been set up in defense or not. The Court can therefore take suo motu take note of the question of limitation.

The provisions of Section 3 of the Limitation Act are subject to the principle that where a question of limitation has been expressly adjudicated upon and there is no appeal against it, the decision is binding on the parties and on the appellate court.

The general rule is that the court shall dismiss a suit instituted after the period od limitation as prescribed under Section 3 of the Act, however, Section 4 to 24 provide certain exceptions to this general rule i.e

Section 4 of the Act states that, when the prescribed period expires on a day when the court is closed, the application may be made or suit filed on the day when the Court reopens.

The general principle of law being, when a party is prevented from doing a thing in court on a particular day, by the act of the court itself, as for instance, on account of the closing of the court, and not by any act of his own, he is entitled to do it at the first subsequent opportunity Angadi v. Hiranmayya, [AIR 1972 SC 239]. This rule applies to suits, appeals or applications, civil or criminal.

Section 5 of the Act enables a Court to admit an appeal or an application after the expiry of the prescribed period on sufficient cause being shown for the delay. The term ‘sufficient cause’ has not been defined in the Act but it has been held that it must mean a cause which is beyond the control of the party invoking the aid of this section. The extension of time under this section is the discretion of the Court.

Extinguishment of Right to Property

Section 27 of the Act lays down that after the expiry of the period prescribed for instituting a suit for possession of any property the person who should have instituted such suit but has failed to do so, shall cease to have any right to the property. After the expiry of its period the remedy is barred and also the title is extinct. This section is confined to suits for possession only.

This section of the Act is not merely procedural but substantive and applies to persons who are out of possession and seek to recover possession but not to the case where a person is still in possession of the property.

Therefore, the Limitation Act, 1963 is the Act which governs the time period within which one can file a suit to sue another to get justice. If the suit is filed after the expiration of time period as specified in this act, thus will be barred by limitation.

There are various limitation periods for different types of actions and if limitation has passed, the claim will be bound by statute and the claimant may be prohibited from bringing a claim against the purported wrongdoer.