This article titled ‘Bawla Murder Case 1925: An Analysis’ is written by Antariksh Anant and discusses the Bawla murder case. I. Introduction In this specific case, the Hindu Maratha Maharaja of Indore was accused of the killing of his Muslim concubine’s alleged lover. The following trial enlightens two significant advancements in British Indian law. To begin with, it uncovered… Read More » 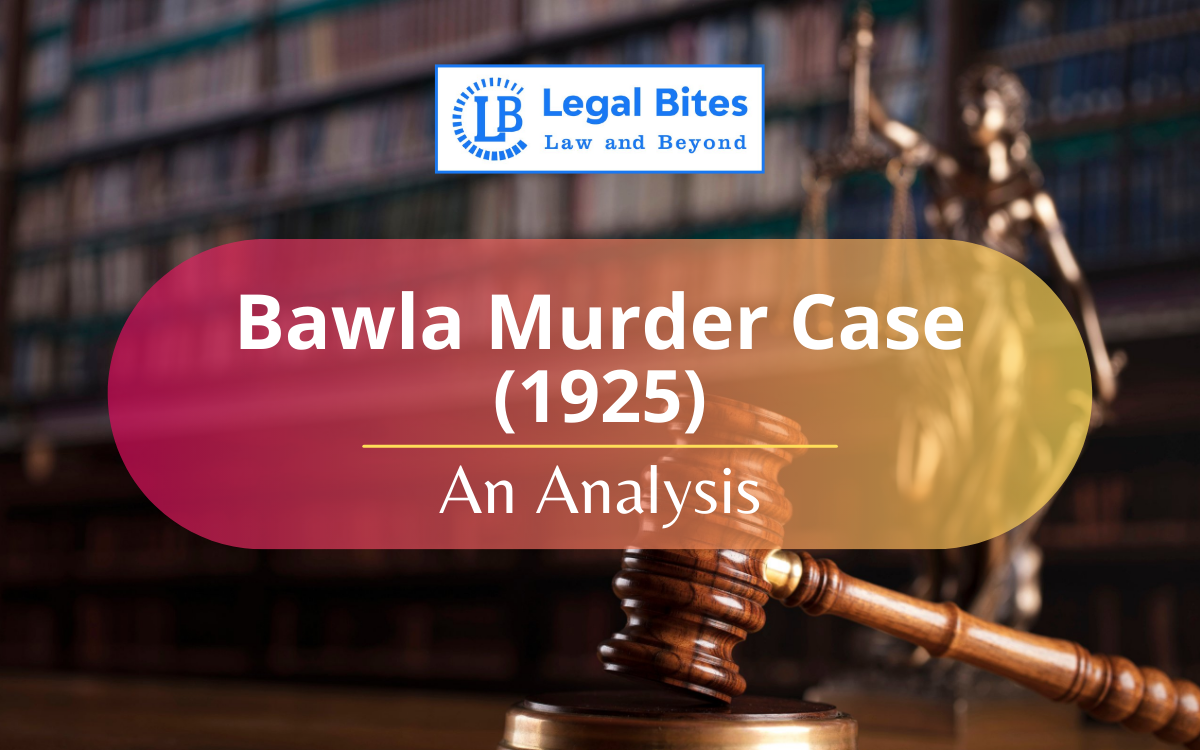 This article titled ‘Bawla Murder Case 1925: An Analysis’ is written by Antariksh Anant and discusses the Bawla murder case. I. Introduction In this specific case, the Hindu Maratha Maharaja of Indore was accused of the killing of his Muslim concubine’s alleged lover. The following trial enlightens two significant advancements in British Indian law. To begin with, it uncovered how British courts engaged some Indian ladies as individual specialists under the steady gaze of...

This article titled ‘Bawla Murder Case 1925: An Analysis’ is written by Antariksh Anant and discusses the Bawla murder case.

In this specific case, the Hindu Maratha Maharaja of Indore was accused of the killing of his Muslim concubine’s alleged lover. The following trial enlightens two significant advancements in British Indian law.

To begin with, it uncovered how British courts engaged some Indian ladies as individual specialists under the steady gaze of the law, notwithstanding the limitations of pardah (or confinement), to challenge and oppose native male-centric societies. Second, it uncovered the complex relationship between Indian sovereignty and British centrality.

Because of their situation as semi-independent rulers, who were not under the limitations of British Indian law, local kings were absolved from being tried in British Indian courts based on their contract with the British.

This case examines the degree to which the sexual longings and desire for the love of the Indian rulers were impacted by the royal state’s loaded relationship with the frontier system. In this in-position, the Malabar Hill Murder trial cost the ruler his gaddi (lofty position) when he was constrained to resign[1].

Mumtaz Begum was a girl who hailed from the city Amritsar, Punjab. Similar to her mother, she was brought as a chanteuse. At this young age, she was desired by the Holkar of Indore, Mahratta prince, who was in his twenties at that time.

The inception of the whole incident takes place on the two short visits made by Mumtaz to Indore for the purpose of singing for the Maharaja. Amazed by her, the Maharaja offered her a position as his mistress, and she successfully held that for a good period of ten years[2].

Her age at the time of the trial is suspected to be in her early twenties. She confessed that she later stopped enjoying her life in Indore. She gradually started feeling suffocated as the Maharaja’s mistress. Soon after this, in the year 1921, she was accompanied by the Maharaja to England.

After the trip to England, she came back to India and gave birth to a child, which she believes was murdered by one of the nurses. She had also requested the Police Commissioner of Bombay to further some protection to her in this regard, which she enjoyed too.

With the fear of losing his loved mistress, the Maharaja was left with no choice but to dispatch her to Mussoorie. However, she managed to escape the train at Delhi and fled back to her hometown, Amritsar. After a while, she was given to the care of Abdul Qadir Bawla, a famous Mohammedan of Bombay at that time.

He took Mumtaz for various motor trips. Then, the pair come to Bombay on the 10th of January, where Bawla was brutally murdered by an Indori group, which was assigned to solve the abduction of Mumtaz Begum.[3]

When in Bombay, Mumtaz and Bawla were driving up the Malabar Hill when Bawla’s car was overtaken. Then a group of men appeared who ordered him to hand over Mumtaz to them. Upon the refusal, there was a struggle that took place in which Mumtaz was violently dragged out of the car, and received violent blows to her face and head with a knife. Alongside, Bawla was held by the other group members.

Coincidentally, at the moment, a car comprising of Colonel Vickers along with three British subalterns was passing by. All of a sudden, J.M. Saegert, one of the three subalterns, hurriedly jumped into the scuffle with his golf club to rescue the pair. He is believed to be played a major part in saving the life of Mumtaz Begum.

Upon being saved, the couple was taken to JJ Hospital, where Bawla was declared dead as he had succumbed to the gunshot and the subsequent injuries. This incident ensued one of the biggest crime investigations and trials of all time.[4]

This case came to the limelight and was the talk of the nation. Mumtaz, who was the former mistress of Holkar of Indore, had fled Indore in lieu of an agreement she had with one of Holkar’s court officials, namely Shankarrao Gawde. Shakarrao was imprisoned upon this and several attempts to bring Mumtaz back Indore were made by the Holkar, but they all went in vain.

Aside from the unmistakable, direct, and blameless proof driven by the indictment, the jury was helped with framing a reasonable image of the crime and of the legal parts of the case, by the skilful summarizing of Mr Justice Crump. This judgment remains in a class without help from anyone else throughout the entire existence of the Bombay High Court. It covers 145 composed folio pages.

The initial 40 pages are dedicated to the initial perceptions as respects the overall parts of a criminal trial, the general elements of judge and jury, which the jury needs to remember, to show up at the right decision. The judge brought up and clarified the different areas of the Penal Code under which the accused were charged, the legal prerequisites which were important to demonstrate the charges, and elucidated the legal situation with elaboration and insightful accuracy.

Maybe, there was over-elaboration of the legal position; however, as the judge called attention to, it is more secure to rehash things time after time than to leave anything inferred.

He likewise called attention to that in a criminal trial with various observers who check out or are worried in an event from different stances, minor disparities will undoubtedly happen; and indeed, these inconsistencies demonstrate the overall reality of the proof; the safe common-sense standard being to search for considerable settlement on the principal realities with conditional varieties.

It was without a doubt a model charge; and it is said that the Chief Justice, Sir Norman Macleod, was so much intrigued with the clearness, culmination and cogency of this charge, that printed duplicates of it were made and requested to be disseminated among Sessions Judges in the mofussil.

Through the currency of the trial, Mumtaz Begum portrayed herself as the victim of various forms of coercion. She alleged that Holkar used force against her in all manner from the very beginning of their relationship, recounting an incident, when six years back, her mother was forcibly taken to Indore. She further stated that was made to lie several times about her age and the living conditions.

The arrest of Major General Sardar ‘Dilerjang’ Anandrao Gangaram Phanse, the nephew of Shankarrao, got into a tricky situation, uncovering how the whole crime had been plotted in Indore, with the sole motivation behind abducting Mumtaz.

A media trial of astonishing extents followed, where the Bombay press “went crazy over the Bawla case with its hint of sentiment and bravery, with the shadow of a decision sovereign behind the scenes”.

The trial even drew the consideration of Ruttie, Muhammad Ali Jinnah’s Parsi spouse—Jinnah was a lawyer for Phanse—who “didn’t move out of the court as long as the trial kept going, and was moved by a craving to help Mumtaz”.

It was intriguing that once upon a time, the press was overwhelmed by a specific local area [Brahmins, with their admittance to instruction and learning, took up positions as editors and journalists].”

The Holkars, being pastoralist Dhangars by standing, were non-Brahmins. “At the point when it came to taking a situation on individuals of different networks, there was a component of predisposition that sneaked in,” he adds.[5]

Tukojirao Holkar III, notwithstanding, tracked down a partner in enemy of station lobbyist, social reformer and columnist Prabodhankar Keshav Sitaram Thackeray, father of Bal Thackeray “Thackeray [in his editorials] brought up that the denounced wouldn’t name Tukojirao in any event, when they had been condemned to death.

He got so put resources into the case that he composed three books on this case; even in his life account [Majhi Jeevangatha], he committed four-and-a-half pages to it. The case likewise thus, became about Brahmins versus non-Brahmins.”[6]

The trial of this famous case started on 27th April 1925 and kept going till the 7th of May. Mumtaz did know the English language, hence have her testimony in Urdu. Many contested that she could not read Urdu, however, her oral testimony was translated into English. Along the trial, she threw light on the plight of concubines at that time.

She drew attention to the fact that women were usually considered as objects and women who worked in service capacities (such as cooks, tailors, dyers, doctors, maids) were also brought in the private spaces of men. Concubines were generally trained for art and music for the entertainment of men.