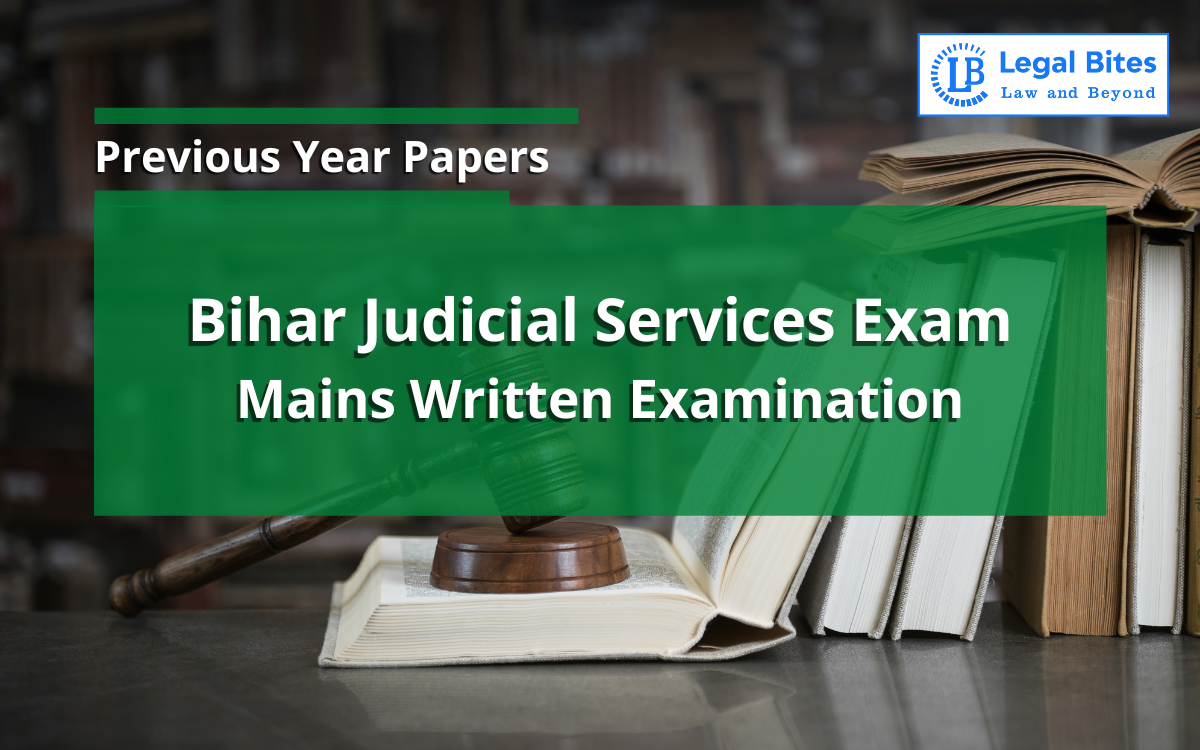 It also gives an idea about the syllabus and how to prepare the subjects by keeping the previous year's questions in mind. All toppers are mindful and cognizant of the types of questions asked by the BJS, to be aware of the various different tricks and types of questions. This should be done by every aspirant when starting their preparation. It is very important to have an overall understanding of the pattern and design of questions.

Only practising the authentic question papers will give you a real feel of the pattern and style of the questions. Here's Bihar Judicial Services Exam Mains 2021 Previous Year Paper (Constitutional and Administrative Law of India).

Read the passage given below and answer any four of the questions that follow:

Even before Independence, India sustained a small and vibrant scientific community with a few, but outstanding contributions to its credit. This was managed in spite of the object poverty and widespread illiteracy that discouraged education of any kind, let alone advanced studies in science and technology. Our people might have missed the Industrial Revolution and its economic and social consequences, but not the revolutionary changes that were then taking place in science. Thus, in August 1947, a newly independent India inherited a science community to work with. New laboratories were built; a new science department of the Government formed and also commissions to harness the power of atom and space.

The Government of the day came out with innovations to free science organizations from the rigid and crippling bureaucratic rules and procedures that were then the norms. As though to underline the importance of science further, Jawaharlal Nehru kept the portfolio of science with himself and persuaded Parliament to pass the Science Policy Resolution, a Utopian document with few parallels in the history of state and science. Much later, his daughter Indira Gandhi would also release a similar Technology Policy Statement of her Government, reiterating the commitment of the state to the pursuance of indigenous technology. With all this support, how have we done in the past 50 years?

Write a letter to your friend who is worried about the future of his family due to losses in business. Try to make your friend feel comfortable and give him some suggestions to improve the situation.

Write an application to the Principle of your college, asking for leave for three days as it is your brother's wedding.

Write a precis for the passage given below. Reduce the passage to one-third of its length and give a suitable title:

Lung diseases have been increasing in our cities. Think of your own friends and families; how many people can you recall straight away as suffering from some kind of breathing problem or asthma, mild or severe? Quite a few? In Bangalore, for example, if you take children alone, more than one in four that's a quarter of them- are victims of asthma today. And look at the way it's been increasing over the years. In 1979, the prevalence of asthma among children below 18 years in Bangalore was 9%. In 1984, it was 18%, and in 1999, it had increased to 29%.

Asthma, as you all know, is caused by various factors: pollen or fungi in the air, change in the rainfall, humidity or temperature, among others. We investigated the conditions that have contributed to this rise in lung disease in Bangalore. We looked at the pollen count first. Our investigation showed that the pollen count in the air had actually decreased in Bangalore since the number of trees have been drastically reduced: so many trees were being cut down. So we had to discount increased pollen count as a causative factor. Then we studied other possible causes, like climatic change, increased humidity levels, etc. our studies showed that there was no marked change in them during this period.

We have therefore come to conclusion that the likely cause of the increase in asthma had to be atmospheric pollution which has increased at an alarming rate. Why has atmospheric pollution increased? Well, one of the causes is that during the 80s the Government had invited a lot of industries to the state to boost its economy and provide employment. This created more factories, and more vehicles, and as you know, both of them contribute to pollution. More people came into the city to work in the new industries, and the city became crowded. Its green spaces contracted; there was more burning of firewood and so on. All these factors have contributed to the rise in air pollution. And as the air became dirties, lung diseases like asthma increased.

Make sentences with any ten words:

Correct the sentences given below:

Use the correct form of the verbs given in brackets (any five):

Punctuate the passage given below:

Translate the passage into English: