Can we adopt a child of 21 years in India?

Can we adopt a child of 21 years in India? In this article, we specifically deal with the age of adoption in different laws and legislations in India. What is adoption? Adoption is a legal coalition between the party willing for adoption and the child and mostly forms the subject matter of an individual’s personal laws. Various Legislations… Read More » 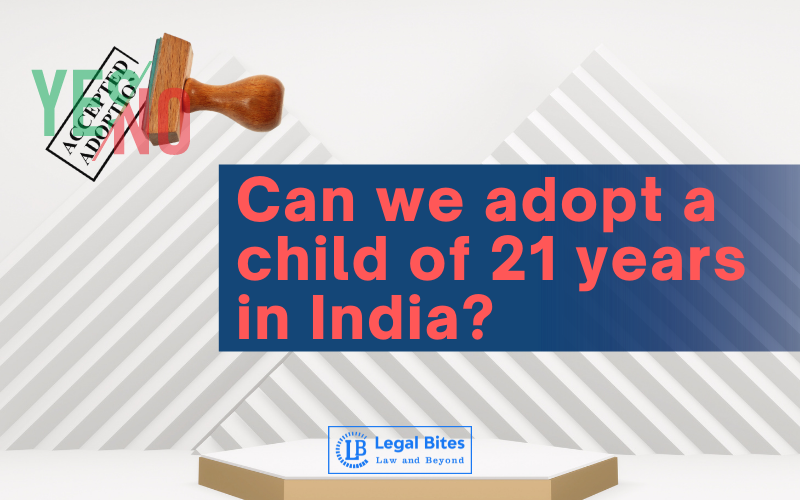 Can we adopt a child of 21 years in India? In this article, we specifically deal with the age of adoption in different laws and legislations in India.

Adoption is a legal coalition between the party willing for adoption and the child and mostly forms the subject matter of an individual’s personal laws.

The definition of ‘child’ in law has to be taken into account in order to determine the age of adoption. The Prohibition of Child Marriage Act, 2006, Section 2 differentiates between a “child” and a “minor”. The word “child” is stated to mean a person, who, if a male, has not completed 21 years of age, and if a female, has not completed 18 years of age; whereas the word “minor” means a person who is under the provisions of the Indian Majority Act, 1875 (for short Majority Act) is deemed to have attained his majority.

According to Section 2(a) of the Juvenile Justice (Care and Protection of Children) Amendment Act, 2006, “adoption means the process through which the adopted child is permanently separated from his biological parent and becomes the legitimate child of his adoptive parents with all right, privileges and responsibility that are attached to the relationship.”

The Indian Majority Act, 1875 lays down eighteen years as the age of majority but, the non-obstante clause (notwithstanding anything contrary) excludes marriage, divorce, dower, and adoption from the operation of the Act with the result that the age of majority of an individual in these matters is governed by the personal law to which he is a subject.

The Hindu Adoption and Maintenance Act, 1956

The Hindu Minority and Guardianship Act, 1956

The customs and rites of the Hindus have been also taken into account and therefore children above 15 years of age can be adopted if such is permitted in her community by duly performing the rites and the rituals as required. Therefore, Under the Hindu Adoption and Maintenance Act,1956 a child who has completed the age of fifteen years shall not be given in adoption unless there is a custom or usage applicable to the parties who are willing to make an adoption that permits them to adopt a child above the age of fifteen years.

Personal laws of Muslims, Christian, Parsis, and Jews do not recognize complete adoption and therefore, a parent looking to adopt a child may do so under Section 8 of the Guardians and Wards Act, 1890. As per the Guardianship law and The Juvenile Justice (Care and protection of children) Act, the following child may be adopted namely-

By virtue of Section 37 of the JJ Act, 2015 and regulations 6 and 7 of AR, 2017 child welfare committee can declare legally an orphaned, abandoned, and surrendered child free from adoption and also allows children up to the age of 18 for adoption.

Central Adoption Resource Authority (CARA) is a statutory body under the ministry of women and child development, Government of India. It functions as the central or nodal body of the adoption of Indian children and monitors the in-country and inter-country adoptions. The conditions mentioned for those who are eligible for adoption are as follows[2]

Adoption in India is of a child of fewer than 18 years is to take care of his person and property point of view as such person is unable to do so himself, but an adult who has attained the age of majority, namely, 18 years is supposed to take care of himself and his property himself without any outside help. That being said is also evident from the fact that in India voting rights have been granted to persons above 18 years of age.

Section 3 of the Majority Act stipulates that every person shall attain the age of majority on his completing the age of 18 years and not before it. Section 6 of the Guardians and Wards Act, 1890[3] (for short G&W Act) also preserves this pre-eminence of personal laws inasmuch as it directs that in the case of a minor, nothing contained in the Act shall be construed to take away or derogate from any power to appoint a guardian of his person or property or both, which is valid by the law to which the minor is subject.

Conclusion | Can we adopt a child of 21 years in India?

Only a child under 18 years of age can be legally adopted in India. A 21-year-old is considered to be an adult in India. He or she can decide to live with anyone of his/her choice. Therefore, the question of adoption doesn’t even arise in this case.