This article explains cross-culture mediation and the role of mediator in cross-culture mediation to bridge the cultural gap. Mediation is one of the types of ADR wherein the mediator helps the parties come to an agreement with each other thus aiding them to reach a settlement. Mediation can broadly be divided into domestic and international. There are innumerable… Read More »

This article explains cross-culture mediation and the role of mediator in cross-culture mediation to bridge the cultural gap. Mediation is one of the types of ADR wherein the mediator helps the parties come to an agreement with each other thus aiding them to reach a settlement. Mediation can broadly be divided into domestic and international. There are innumerable factors that act as an impediment in the process of mediation, for example, the mala fide intention of the parties, language,...

This article explains cross-culture mediation and the role of mediator in cross-culture mediation to bridge the cultural gap. Mediation is one of the types of ADR wherein the mediator helps the parties come to an agreement with each other thus aiding them to reach a settlement. Mediation can broadly be divided into domestic and international. There are innumerable factors that act as an impediment in the process of mediation, for example, the mala fide intention of the parties, language, and cultural differences, differences in power, etc.

Cross-cultural mediation is an umbrella term used for mediation where the dispute is between parties from different nations with different cultural standards. There are different interpretations of the word culture. Culture according to Geert Hofstede is the “the collective programming of the mind that distinguishes the members of one group or category of people from others”.

According to Kroeber & Kluckhohn “Culture consists of patterns, explicit and implicit, of and for behaviour acquired and transmitted by symbols, constituting the distinctive achievements of human groups, including their embodiment in artefacts; the essential core of culture consists of traditional (i.e. historically derived and selected) ideas and especially their attached values; culture systems may, on the one hand, be considered as products of action, on the other, as conditional elements of future action.’ “[1]

In a nutshell, culture is an abstract character that can be used to define a person’s action in the past, present and future. Every human being identifies themselves with a particular culture. When parties in mediation have different cultural integrities it is difficult for them to reach a common ground that would pave the way for an agreement.

Differences That Can Arise

In one of the reports of the Program on negotiation, in the Harvard School of Law, they brought out the various cultural aspects that affect the negotiations. They effectually divided the world into 3 pure cultural prototypes i.e ‘dignity,” “face,” and “honor” cultures and other mixed cultural prototypes. The three prototypes were assigned to the various groups of continents which show the similar cultural bent of mind and the characteristics which they prioritized over the others.

Dignity was assigned to the United States, Canada, and Northern Europe.”In dignity cultures, people strive to manage conflict rationally and directly while avoiding strong emotional reactions. Because dignity cultures typically are supported by strong laws and markets, members tend to trust others and engage in mutually beneficial trades, a mindset that leads them to prefer a collaborative approach to negotiation.”[2]

The face was assigned to East Asian societies such as China and Japan which were predominantly agriculture economies.

According to the report face cultures tend to protect their reputation. They avoid direct confrontation out of the urge to safeguard their reputation and image, they suppress emotions and respect authority. They do not directly approach the negotiation but juggle offers to ensure fair-play and safeguard of reputation. They focus on the trustworthiness of the counterpart. [3]

The honor was assigned to the regions with herding economies and low population density, including the Middle East, North Africa, Latin America, and parts of southern Europe. The report mentions that theft deterrence, defense of oneself and protection of honor becomes an important aspect of their negotiation. They are aggressive with insults and are reluctant to trust the other party because of the fear of betrayal.[4]

Another prototype is that of the mixed culture which is essentially a combination of two or more of these prototypes.

According to Professor Israeli Professor Raymond Cohen- The high context cultures who use nonverbal, implicit, style of communication generally predominates in the states which follow the ideologies of collectivism, not individualism which is mainly predominant in the non-Western states examined like China, India, Japan, Mexico, and Egypt. It lays a particular focus on building healthy relationships; and is constantly considering factors such as status, respect, face and evades confrontation.

The empirical studies of Dutch cultural anthropologist Geert Hofstede serve as an excellent tool in deciding the problems one faces in mediation. Geert Hofstede had devised these 5 indices which are an important

a. The Power Distance Index (PDI)

Individualism means the importance given to a particular individual and collectivism would mean the focus of the team or the community as a whole. It clearly shows the importance that a country gives to individual and collective conscience. High individualism countries include the U.S., Australia, Great Britain, Canada, Netherlands whereas countries include many South and Latin American and Asian countries such as Guatemala, Ecuador, Panama, Venezuela.

In contemporary negotiation theory, masculine cultures are characteristics of highly competitive negotiators who will use strategies to bring the parties to a “win-lose” position. On the other hand, Feminine cultures are cooperative, “Win-win,” or principled negotiators, and they will use cooperative and Getting-To-Yes type negotiation strategies and tactics. Domination and showing off of power is the major feature of the masculine culture.

On the masculinity dimension, Japan is one of the cultures ranked very high. On the other hand, the Scandinavian countries are among the most feminine.

A high uncertainty avoidance culture creates give great importance to the laws and rules to prevent the probability of risk in the future. If the counterparts in such a situation show lenient and laidback attitude these cultures would reduce the trust in these parties.

Low uncertainty culture, on the other hand, is normally avoided rules and is more tolerant towards opinions that are not rule-based. Normally the low-uncertainty culture does not have high-stakes involved or is too experienced in mediation. They more readily acceptable to change, and take more and greater risks.

“Long-term orientation cultures tend to respect thrift, perseverance, status, order, sense of shame, and have a high savings rate. Their members tend to make an investment in lifelong personal networks, what the Chinese call “guanxi.” There is a willingness to make sacrifices now in order to be rewarded in the future.

In a culture with a Short-term Orientation change can occur more rapidly because long-term traditions and commitments do not become impediments to change. A short-term orientation leads to an expectation that effort should produce quick results. Although it might not seem at first obvious, a short-term orientation culture has a concern for saving face.” [5]

Since language is a tool for communication, the difference in language and style of communication is the major impediment in cross-culture mediation. It is difficult to conduct the mediation in which the parties have no knowledge of the language of the opposite part. In addition to it, there is always a possibility of the fallibility of the interpreters. It takes time for such parties to built camaraderie with each other.

Sometimes there exist disputes between the parties who belong to historically averse communities. When the parties join each other the context of aversion in the past may pop up resulting in animosity between the parties in the mediation. For example, the history of slavery of the blacks by the whites and the subjugation faced by the Jews in the hand of the Nazis.

Generally in a diplomatic negotiation and mediation process, the mediator will be very cautious of the cultural differences and will tackle the issue if it ever arises with utmost diligence. But, historical differences are always a part of the dispute between the parties.

In the paper presented by Laura N. Mahan and Joshua M. Mahuna a model was devised to be comprised of three procedures that incorporate mediator(s) into the midst of conflicted parties while guiding each individual conflicted party towards determining separate narratives:

The validation of narratives, norms, and the definition of conflict, self-reflection to determine positionalities and interests what were the determinations mechanized in this narrative to produce the current positionality (3) Future-building to seek goals beyond intermittent or gradual accommodative/integrative processing and (4) Re-experience and narrative re-construction to re-determine the new confines approached through the integral constructive processes” [6] 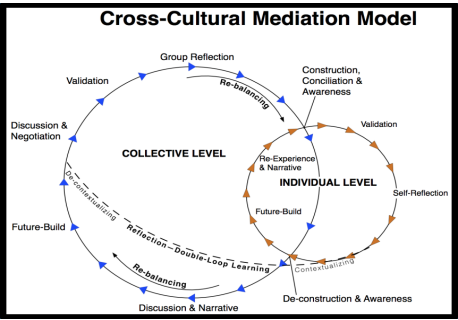 A mediator should identify the similarity and differences between different cultural identities and create try to frame a common-ground and instead of focusing on the differences, you could look for common ground which would satisfy both the parties.

If required the mediator can seek special interpreters to solve the linguistic problems and ensure to the parties that mediation is a trustworthy process. The mediator should try and break down the power structure and be carefully try to put aside any imbalance of power for a smooth process of conflict resolution

[5] Professor John Barkai. What’s a Cross-Cultural Mediator to Do? A Low-Context Solution for a High-Context Problem. 10 Cardozo Journal of Conflict Resolution 43 (2008),