Expiry and Repeal of Statutes: Introduction and Meaning

This article titled ‘Expiry and Repeal of Statutes: Introduction and Meaning.’ is written by Simran Kang and discusses the expiry and repeal of statutes. I. Expiry of Statute A formal written enactment enacted by a legislative authority is known as a statute. It governs a city/state/country as the case may be. There are various types of statutes, including those that… Read More » 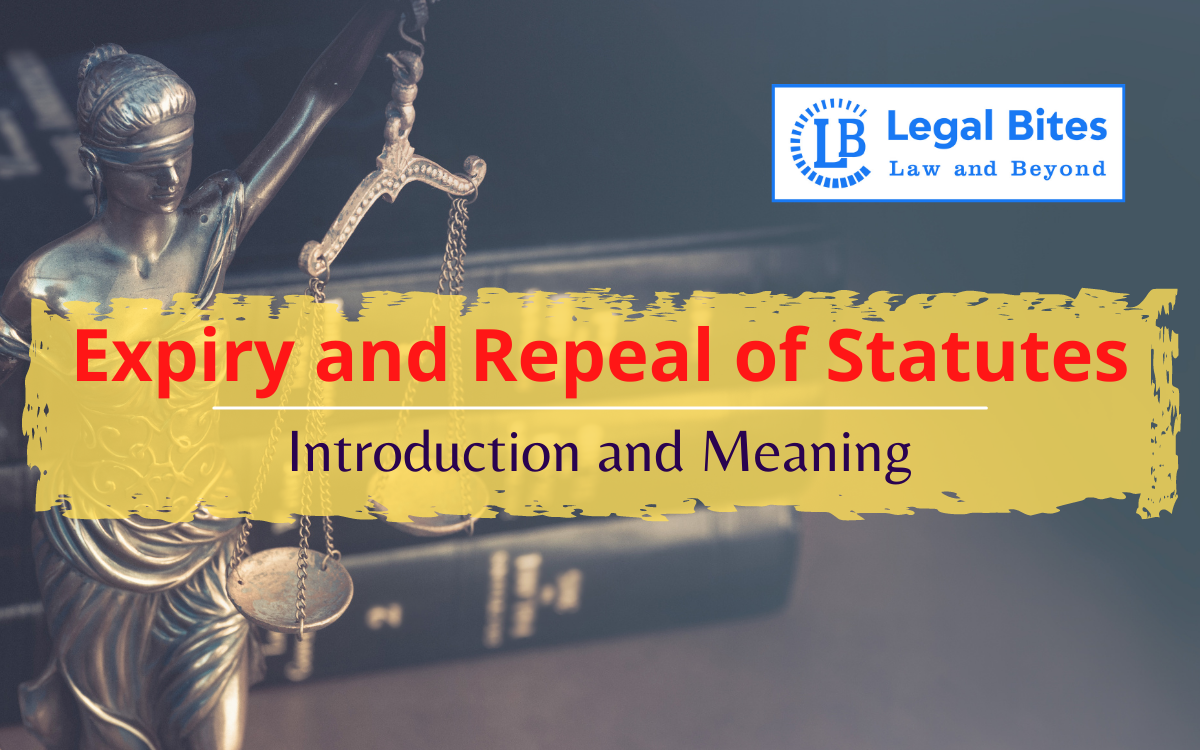 This article titled ‘Expiry and Repeal of Statutes: Introduction and Meaning.’ is written by Simran Kang and discusses the expiry and repeal of statutes. I. Expiry of Statute A formal written enactment enacted by a legislative authority is known as a statute. It governs a city/state/country as the case may be. There are various types of statutes, including those that govern countries, states, cities, and counties. In a nutshell, it’s a law that was passed and signed into...

This article titled ‘Expiry and Repeal of Statutes: Introduction and Meaning.’ is written by Simran Kang and discusses the expiry and repeal of statutes.

I. Expiry of Statute

A formal written enactment enacted by a legislative authority is known as a statute. It governs a city/state/country as the case may be. There are various types of statutes, including those that govern countries, states, cities, and counties.

In a nutshell, it’s a law that was passed and signed into law. Statutes can be classified into various categories, including temporary, permanent, consolidated, codifying, fiscal, remedial, penal, and declaratory statutes. As a general rule, Statutes can be categorised based on their duration, method, object, and application area.

Statutes (Statutes Temporary) can only be extended by fresh enactment or under powers granted by the Act. Temporary statutes are those that are only in effect for a certain period of time, and unless they are repealed prior to the expiration of that period, they will expire at the end of that period.[1]

Temporary Act saving provisions, like Section 6 of the General Clauses Act 1897, are regularly enacted by legislators. As long as the temporary statute does not include such a provision, it will automatically terminate when it expires, meaning that a person cannot be prosecuted for an offence against the act after its expiration unless the saving provision is included. If the prosecution has not ended before the Act’s expiration date, it will automatically terminate as soon as the Act does.[2]

In Trust Mai Lachhami S. Bradari v. Amritsar improvement Trust,[3] a temporary statute dealing with preventative detention threatened to place the petitioner in jail. Some of the statute’s provisions were re-enacted after it expired.

The most pressing question was whether or not detention would be automatically terminated upon the expiration of the statute?

An appointment, notification or order made or issued under a temporary Act that has expired will also come to an end with the Act’s expiration and will not be continued even if the expired Act’s provisions are re-enacted because of Section 24 of the General Clauses Act, 1897, which does not apply in this case.

A Temporary Act’s expiration generally means that any appointments or orders made or issued under the Temporary Act will also come to an end with the expiration of such act, even if the expired Act’s provisions are still in force. Section 24 of the General Clauses Act of 1897 does not apply in this case, hence it was re-enacted.[4]

Even in the lack of Section 6 of the General Clauses Act 1897, a temporary Statute is not dead for all intents. An important factor to take into account when trying to determine whether or not the right or responsibility stemming from a Temporary Act is permanent is its nature and character that even if the temporary Act expires before the whole time of punishment has expired, a person who has been prosecuted and sentenced for breaching its provision while it is still in effect cannot be freed before serving out his or her sentence.[5]

When a temporary law expires, the provision of the General Clauses Act, 1897, which deals with repeals, does not apply, as was the case with Wicks v. Director of Public Prosecutions.[6] As a result, the outcome of the expiry depends on how the legislation was drafted in the first place.

Repeal can mean either to cancel or to revoke something, but in the context of law, it means to abolish statutes. As soon as legislation is abolished, it ceases to exist and has no legal force. There is also no fundamental distinction between amending and repealing a law. Amendment and repeal are both used to describe the same thing: the substitution, omission, or addition of a word or phrase.

Statutes might be either temporary or permanent. These laws are only in effect for a limited time and are called “temporary legislation.” Perpetual statutes, on the other hand, continue in existence until they are replaced or repealed by a subsequent legislative act, even after the initial time has expired.

Like the capacity to pass new laws, the legislature also has the authority to revoke previously enacted ones. Repealing a statute is equivalent to enacting legislation, as the Companies Act of 2013 repealed the Companies Act of 1956, and the Criminal Procedure Code of 1973 repealed the preceding Criminal Procedure Code. Both the federal and state legislatures have this authority, but they are limited in their ability to delegate the repealing power.[7]

However, the intention to reinstate a previously repealed provision cannot be inferred when the repealing provision itself is overturned, but common law principles may once again apply. Section 6 of the General Clauses Act, passed in 1897, defines “repeal” as the “as if it had never been passed” abolition of one statute by another. When an act is repealed, “it must be viewed as if it had never existed” save for past and closed transactions.[8]

To put it another way, the purpose of repealing and amending statutes is to lower the volume of statutes by removing unnecessary legislation. In most cases, amending Acts are extinguished because they have served their function and there are no longer any grounds for them to exist.

Repealing and amending laws can also be used to clear out contradictions. Statute Law Revision Acts in England are intended solely for legislative housecleaning and have no intention of altering the law in any way.[9]

The major goal of this legislation is to make required alterations to the current law in light of shifting social, economic, and cultural factors. It is the intention of this Act to eliminate from the body of law any provisions that are no longer relevant or useful at all.

To determine whether the new provision achieves its aim and has different intentions, the court must first remove all out-of-date information. This act is a rewrite of the Act, removing irrelevant and out-of-date provisions and inserting new, more accurate ones. There are two types of repeal namely, express repeal and implied repeal.

Express repeal is a statement that refers to a statute’s abolition by the newly established provisions of the newly enacted statute through explicitly stated language embedded in the newly enacted statute. The statute that has been repealed is known as the repealed statute, and the one that replaces it is known as the repealing statute. As a general rule, when a previous statute or part of its provisions are explicitly repealed in a newly passed statute, the term “express repeal” is used.[10]

The Essential Elements of an express repeal are as follows:

Hence, if an earlier statute or part of a statute is found to be incompatible with the new one, it might be repealed or replaced.

As seen in Bhagat Ram Sharma v. Union of India,[11] there is no fundamental difference between repeal and an amendment. Similarly, where an Act is omitted by an Act and the said Act simultaneously re-enacts a new provision which substantially covers the field occupied by the repealed provision with certain modification, in that event such re-enactment is regarded as having force continuously and the modification or changes are treated as amendment coming into force with effect from the date of enforcement of the re-enacted provision.

The phrase inferred refers to something that is implicit or hints at something. The term implied repeal refers to the process of repealing a statute if it is suggested that it is no longer in effect and will be replaced by a new one.

For instance, when we enter a car dealership we are expected to be interested in purchasing a vehicle. Furthermore, if there is a contradiction in the statute, and it becomes essential to repeal the statute with a new one because of particular conditions, the implication of repeal is implicit.

The phrases enshrined in the repeal clause are used to determine the issue if the reference is not direct. Absent explicit provisions for repeal, any statute or piece of legislation is expected to remain in effect.

The person who alleged the implication of repeal bears the burden of proof in the event of implied repeal. But if the newly enacted statute does not include any clear definitions, it has also been mentioned.[12]

A presumption that an earlier act was intended to be repealed is rebutted and the act of repeal is done by inferring the necessary implications from the presumption.

“Leges posteriores priores contrarias abrogant” is the adage on which implied repeal is founded. This signifies that the old legislation will be wiped out or eliminated by the new one that has just been passed.

When Bharat Oil Co. and the Municipal Board of Bareilly argued in Municipal Board v. Bharat Oil Company,[13] the State Government had established laws governing the levy of octroi in general. New rules for octroi in Bareilly were drafted by the state government, which said that the new rules would be applied in place of the old laws.

There is a major question as to whether the state government’s rules are regarded repealable. Bareilly municipal rules were deemed to be repealed as a result of this decision.

In Ratanlal Adukia v. Union of India,[14] the Supreme Court noted that the doctrine of implicit repeal is loosely based on a declaration that legislators thought the current status of the law did not intend to produce any vagueness by keeping the contradictory sections in question. Invoking this theory, the court assesses the nature and scope of the two enactments by applying the legislative intent.

Prejudice toward a repeal by implication is evident. Since the legislature is presumed to be fully aware of current legislation on the issue, it is presumed to have no desire to repeal it when enacting a new law without including a mechanism for its repeal. The party asserting a repeal by implication bears the burden of proof. Implied repeal can be overruled by courts.[15]

No implied repeal can be found in Harshad S. Mehta v. State of Maharashtra,[16] as long as the two statutes can stand on their own merit. Avoiding an implied repeal should be the goal if possible.

Abolition of laws means that the legislation has been abolished, and once a statute is abolished, it is considered void and has no effect. There is also no fundamental distinction between amending and repealing a law. For equivalent expressions like substitution, omission, or addition, the terms “amendment” and “repeal” are both employed.

Both the federal and state legislatures have this authority, but they are limited in their ability to delegate the repealing power. The major goal of this legislation is to make required alterations to the current law in light of shifting social, economic, and cultural factors.

A primary goal of this legislation is to remove outdated or obsolete material from the statute books. Once outmoded material is removed, the court must evaluate whether the new provision accomplishes its stated purpose or not. This act is a rewrite of the Act, removing irrelevant and out-of-date provisions and inserting new, more accurate ones.

[7] Suryansh Singh, 2019, Important pointers you must know about effects of repealing statutes, iPleaders.