Formation of a Company under the Companies Act, 2013

In this article, the author seeks to analyse the formation of a company as envisaged under Section 3 of the Companies Act, 2013. The article focuses on the different forms of companies and their peculiarities. It also throws light on the types of companies based on the extent of liability. Moreover, the article comprehensively discusses the process of… Read More » 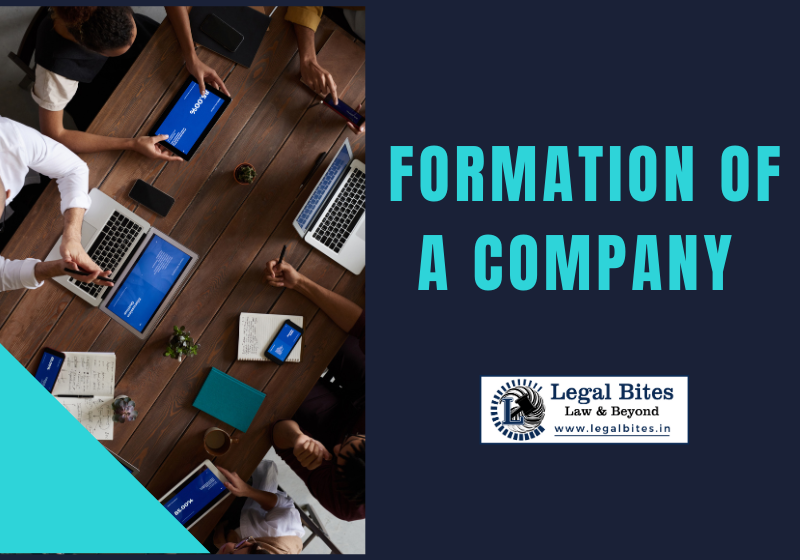 In this article, the author seeks to analyse the formation of a company as envisaged under Section 3 of the Companies Act, 2013. The article focuses on the different forms of companies and their peculiarities. It also throws light on the types of companies based on the extent of liability. Moreover, the article comprehensively discusses the process of the formation of a company and the main particulars related it its incorporation. Formation of a Company under the Companies Act, 2013 |...

In this article, the author seeks to analyse the formation of a company as envisaged under Section 3 of the Companies Act, 2013. The article focuses on the different forms of companies and their peculiarities. It also throws light on the types of companies based on the extent of liability. Moreover, the article comprehensively discusses the process of the formation of a company and the main particulars related it its incorporation.

Formation of a Company under the Companies Act, 2013 | An Overview

A company is an artificial legal person who comes into existence by a process called “incorporation.” It is only when a company has been incorporated, it becomes a distinct entity from those who invested their capital as well as labour in it. Usually, for the formation of any company, the first step is the process known as “promotion” where a person persuades others to contribute capital to a proposed company before it is incorporated. Such a person is called the promoter of the company and its definition is given in Section 2(69) of the Companies Act, 2013. [1]

II. Formation of a Company as per the Companies Act, 2013

III. Definition of a Company which can be formed under Section 3 of the Act

Before delving further into the details regarding the formation of a company, it is important to understand what exactly is the meaning of these different types of companies. Section 2(68) of the Act defines a private company as a company that has a minimum paid-up share capital as prescribed and restricts the right to transfer its shares according to the conditions laid down in the Articles of Association of the company. The maximum limit of members who can form a private company is 200 except in case of an OPC.

Additionally, it is specified that for ascertaining the number of members, persons who jointly hold one or more shares shall be treated as a single member for the purposes of the Act. The section also provides that employees of the company as well as a person who was a former employee as well as a member and who has ceased to be an employee but remains a member shall not be included for ascertaining the maximum number of members. Another feature of a private company is that it prohibits the public from subscribing to the shares of the company.[2]

Section 2(62) provides that a One-person Company means which only has one person as its member. It is to be noted that prior to the Companies (Amendment) Act, 2015, a minimum paid-up share capital of rupees one lakh for a private company and rupees five lakhs for a public company was prescribed under the Act. Currently, this requirement has been done away with and there is no minimum paid-up share capital that is prescribed under the Act.[3]

IV. Details concerning the Formation of a Company

Such a person is to become a member of the company in the event of the subscriber’s death or his incapacity to contract. Such a person’s written consent has to be filed with the registrar at the time of incorporation of the One-person company along with his memorandum and articles.

It is also provided that such a person may withdraw his consent in accordance with the prescribed manner.[4] Moreover, the member of the One-person company may also change the name of the nominee by following the prescribed procedure. A duty is vested upon the member to intimate the company of such in the nominee by indicating the same in the memorandum or otherwise. After this, the company has to notify the Registrar of Companies (RoC) of such change. This clarifies that such a change in a nominee is not be treated as an alteration of the memorandum of the company.[5]

V. Categorization of the Companies based on Liability

The Companies Act provides for the formation of both limited and unlimited companies. As per section 3(2) of the Act, a company formed under the Act may either be a company limited by shares or a company limited by guarantee or an unlimited company. The liability of the members, in the case of a limited company, maybe limited with reference to the nominal value of the shares, respectively held by them or to the amount which they have respectively guaranteed to contribute in the event of winding up of the company.

Section 2(21) of the Act defines a Company limited by guarantee as a company having the liability of its members limited by the memorandum to such amount as the members may respectively undertake to contribute to the assets of the company in the event of its being wound up. The contribution from members are postponed to the event called winding up. Clubs, trade associations and societies for promoting different objects are examples of such a company. It should be noted that a special feature of this type of company is that the liability of members to pay their guaranteed amounts arises only when the company has gone into liquidation and not when it is a going concern.[6]

The definition of a Company limited by shares is given in Section 2(22) of the Act. It provides that a company having the liability of its members limited by the memorandum to the amount, if any, unpaid on the shares respectively held by them. The contribution from members is the current requirement at the time of incorporation or call. There is no liability for members holding fully paid-up shares.

However, in case of partly paid-up shares, the unpaid portion is payable at any time during the existence of the company on a call being made, whether the company is a going through a concern or is being wound up. This is the essence of a company limited by shares and is the most common form in existence.

It must be noted that in the case of a guarantee company having share capital the shareholders have two-fold liability: to pay the amount which remains unpaid on their shares, whenever called upon to pay, and secondly, to pay the amount payable under the guarantee when the company goes into liquidation. The voting power of a guarantee company having share capital is determined by the shareholding and not by the guarantee.[7]

In contrast to companies where there is a limit to the shareholder’s liability, an Unlimited Company means a company not having any limit on the liability of its members as defined in Section 2(92) of the Act. It means that in the form of the company, the members are liable for the company’s debts in proportion to their respective interests in the company and their liability is unlimited.

However, the members of an unlimited company are not liable directly to the creditors of the company, as in the case of partners of a firm. The liability of the members is only towards the company and in the event of its being wound up, only the Liquidator can ask the members to contribute to the assets of the company which will be used in the discharge of the debts of the company. It is not necessary that such companies should have share capital. Looking at this categorization of companies based on liability, it must be noted that they are either public or private companies.

VI. Particulars for the Formation of a Company

It is very evident that in order to form a company, the proposed members must subscribe their names to the Memorandum of Association of the Company. The MoA is the most important document as far as a company is concerned. It is often called the “Constitution” of the company. The preparation of the MoA of a company is one of the first steps in the formation of a company.

It lays down the basic conditions upon which a company has to be incorporated. The Companies Act under Section 4 provides that the MoA has to be divided into five clauses as per any of the forms specified in Tables A to E in Schedule 1.[8] The different clauses which must be mandatorily present in the MoA are the Name clause, Registered Office clause, Objects clause, Liability Clause and the Capital Clause.[9]

In addition to the MoA, the next most important document for the formation of a company is the Articles of Association (AoA) as provided in Section 5 of the Act. Whereas the MoA mainly handles the external affairs of a company, the AoA is concerned with regulating the internal structure of a company. Articles are internal regulations and bye-laws for the management of the company.[10]

The process for the incorporation or formation of a company is provided in Section 7 of the Act. In order to form a legally valid company, it must be registered according to the conditions prescribed in the Act. An application must be filed with the Registrar of Companies accompanied with certain documents such as the memorandum of association, articles of association, a copy of the agreement, if any, which the company proposes to enter into with any individual for his appointment as managing or whole-time director or manager and a declaration that all the requirements of the Act have been complied with.[11]

The provision also has introduced certain new requirements which are listed under clauses (c) to (g) of the Act. It is only after receiving all the documents and information listed in Section 7(1) that a registrar shall issue a certificate of incorporation. The issue of such a certificate brings the company into existence as a legal person. It marks the birth of a company, and the date mentioned in the certificate is regarded as the day on which the proposed company came into existence as a distinct legal entity. The Registrar shall also allot to the company a corporate identity number, which shall be a distinct identity for the company and which shall also be included in the certificate.[12]

This article discusses in detail the formation of a company as enumerated in Section 3 of the Companies Act, 2013. The various types of companies such as private, public, and OPC have been discussed and their specialties have also been addressed. Moreover, the different types of companies based on liability as mentioned in Section 3(2) have also been looked into. Lastly, the process of formation of a company and the main particulars required for its incorporation have also been discussed in this article.

[1] Hereafter referred to as the “Act”