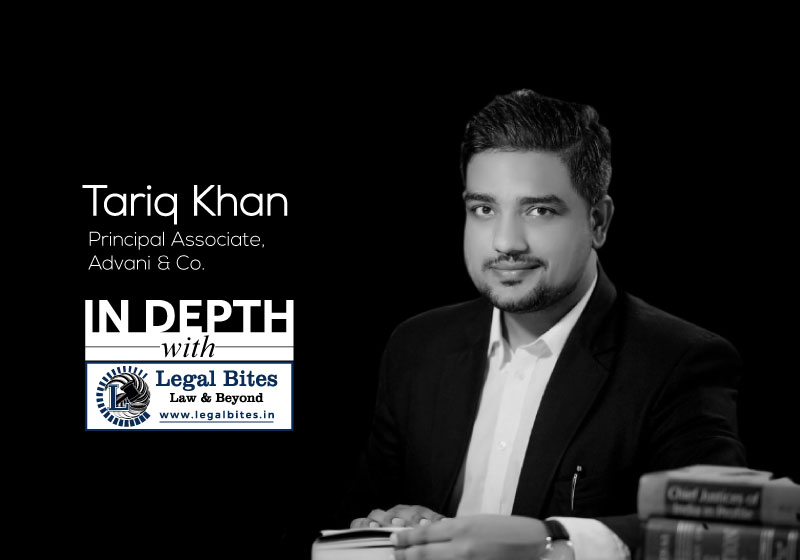 Tariq Khan is an acclaimed arbitration lawyer and presently a Principal Associate at Advani & Co., New Delhi. He is an alumnus of Jamia Millia Islamia (JMI), where he completed his LL.B. Honours degree. He was recently recognised as the youngest legal professional featured in the prestigious BW (Business World) Legal 40 under 40, 2020 list.

He has authored the bestselling book On the Rise for which he was also featured in the Fortune 500 (India) magazine (Special Issue, 2017-2018). Tariq Khan is also a speaker and a guest faculty at various well-known Indian law schools.

We recently got a chance to interview Mr Tariq Khan:

Legal Bites: Congratulations on being featured in BW Legal World’s 40 under 40 list, 2020. From a young law student in JMI to having a successful career as an Arbitration Lawyer, you have achieved quite a lot in a rather short period of time. What has been your biggest driving force throughout this journey?

Tariq Khan: Enthusiasm moves the world. I have been very passionate about arbitration and I think that has been one of my biggest driving forces in this journey. Though I am still in my legal cradle and I am still learning the subject however, every little achievement during this journey has motivated me to do better. Coming from a humble background, I always wanted to lead by example and influence other students like me, especially the first generation lawyers and those who are not from prominent law schools.

Being recognized as the youngest in BW’s Top 40 under 40 lawyers has been an overwhelming achievement for a person like me who does not have a godfather in the field. We must always strive for the best and put in our 200% in whatever we do. At the same time, we must always remember that Rome was not built in a day and it is only after years of meticulous determination and focus, one can reach his/her desired goal.

Legal Bites: You have been pretty vocal about the hardships you faced as a budding lawyer. Non-English speaking students from middle-class and lower-income groups have a tough time funding their education as well as adjusting to the atmosphere of cut-throat competition and networking. Would you consider the present legal education system in India elitist in some ways? How can students overcome such challenges?

“Education is now priced in India, not given”.

Money power has captured legal education in our country which is nothing but malignancy. Law colleges have become money-sucking engines.

Surprisingly, law students are being taught by teachers who have never even appeared in any court! Emphasis is laid on theoretical modules and memorization of legal sections. To my understanding, the focus must be on the practical applicability of law using the analytical method rather than the rote method.

For students who are ready to face challenges, there are ample opportunities. Initially, the profession may not be very rewarding however, if you stay in the profession and not give up, then you will be rewarded beyond your imagination. You must not confine yourself to books and lectures delivered in the classroom, but read books, go through articles, watch speeches online, study judgments and participate in moot courts and debate competitions. Recognizing opportunities and converting them into stepping stones towards success must be focused on.

Legal Bites: Law students have been finding it increasingly difficult to get good internships in order to kick-start their career in law. What are some skills that students need to acquire to land internships at major law firms?

Tariq Khan: Securing internships might seem to be a task for law students, especially in the first and second year. However, networking plays a vital role to get in touch with legal professionals and in securing various opportunities. It is extremely important to get involved with your peers, seniors, co-interns etc. for establishing meaningful professional relationships.

Undoubtedly, “what you know” is important but “who you know” also plays an important role in your career. Therefore, networking for first-generation lawyers is of utmost importance as most of them lack adequate career guidance. Networking with the lawyers in law firms during internships will open avenues and job prospects for law students.

Another important aspect is building a strong CV. A well put CV highlighting a student’s expertise with a focus on a particular area of law, impresses law firms. An effective cover letter also plays a major role.

Legal Bites: The government has been working towards the institutionalization of Arbitration in India. Do you think the 2019 amendment to the Arbitration and Conciliation Act makes India a step closer to becoming a hub of domestic and international arbitration?

Tariq Khan: The New Delhi International Arbitration Centre Bill, 2019 was passed recently with a view to make India the hub of International Arbitration. However, the larger issue still remains i.e., why India is languishing for decades and has not been able to become an arbitration hub? The reason in my view is that emphasis is put only on cities like Delhi and Mumbai and that the concerns of other cities which are in need of an arbitration culture and institutions are not addressed.

Additionally, we must also learn from the development of the best three arbitral institutions i.e., ICC, SIAC and LCIA that have a huge number of cases, growth in revenue etc. (e.g. SIAC’s case filings have increased by over 300% in the last ten years). Therefore, it is necessary that arbitral institutions in India adopt modern rules, make effective use of technology and provide an organized structure of proceedings, excellent administrative support and good infrastructure.

Additionally, ease of doing business in India also needs to be facilitated to provide a solid base and ensure longevity.  Not only will it make India the hub, but also create a dynamic arbitration culture.

Legal Bites: What has been the impact of the Covid-19 pandemic on arbitral proceedings? Do you foresee any long-lasting changes in the Alternative Dispute Resolution system in India because of recent developments?

Tariq Khan: This pandemic has called for various changes including conducting virtual hearings. To ensure resolution of disputes, certain proceedings were conducted using virtual mediums, however, there have been various issues in virtual hearings especially in cases where evidence was being recorded. In a case, the parties refused to go ahead with cross-examination via video conferencing and in some cases, after the evidence was recorded, the counsel requested the tribunal to disregard the testimony as the cross-examination was not recorded properly.

Even before the pandemic came into existence, the need for adoption of technological advancements was seen to be relevant and growing to save time and costs. In fact, transcription services in arbitration hearings are very common in international arbitrations as it saves a lot of time.

Since nobody was prepared for the pandemic and nobody anticipated that virtual mediums will become the primary tool for conducting hearings, there is no robust virtual setup or proper guidelines for conducting such hearings. Technologies that ensure accuracy and help in conducting face-to-face interactions between parties, witnesses and arbitrators, without malfunctions and setbacks, need to be developed.

Legal Bites: You have previously given credit to Advani & Co. for helping you find a footing in the field of arbitration. You’ve also cited lawyers like Abhishek Manu Singhvi and Fali. S. Nariman as your mentors and inspirations. How important is it for law students to have mentors in this profession and receive proper guidance? Also, what can they do in its absence?

Tariq Khan: I have had many mentors in this journey including Dr Abhishek Manu Singhvi, Mr Fali. S. Nariman, Mr Ram Jethmalani, Justice Krishna Iyer etc., whose work in the field I have been following since early college days. These legal eagles have contributed immensely to the Indian legal system and I have personally benefitted a lot from their advice.

Having a mentor in the legal profession is extremely important especially for first-generation lawyers. There is no dearth of opportunities, it is only the dearth of right career guidance which a mentor can provide. Especially, at the beginning of our career, we need a mentor who is able to guide us and inculcate in us various skills which are necessary for becoming a good person and a professional. Also, once you are practising and come across tricky substantive legal issues, mentors help you learn how to deal with the difficulties.

Legal Bites: What do you think is the future of dispute resolution and arbitration in India?

Tariq Khan: Arbitration in India has come a long way from the 1996 Act to the newly introduced 2019 Arbitration Act. Courts have also been delivering judgments with a pro-arbitration approach. However, I feel that to ensure an efficient arbitral mechanism and see it grow substantially in the near future, the appointment of young lawyers as arbitrators must be encouraged.

Apart from arbitration, I also feel the mechanisms like mediation and conciliation need to be promoted and global practices need to be studied and inculcated.

With digital arbitration being promoted, the future of arbitration in India would surely be promising.

Legal Bites: Lastly, is there anything you would like to tell law students, especially the ones who would like to make a career in arbitration?

Tariq Khan: The harder you work, the luckier you will get. There is no substitute for hard work. Believe in yourself and focus on possibilities rather than the limitations. Work 28 hours a day and 10 days a week during your internships and put in two hundred per cent efforts in whatever task is assigned to them (no matter how big or small). These efforts will definitely be acknowledged and appreciated and will eventually help in securing a position in the firm.

Needless to say that smart work coupled with hard work is the ultimate combination. These days there are so many opportunities for young aspirants to make a niche for themselves including but not limited to writing articles on important aspects of law.

If a student is interested in pursuing a career in arbitration, they could actively participate in arbitration conferences that are associated with groups like Young ICCA, ICC YAF, YSIAC etc. Attending these conferences and joining such groups help not only in gaining practical knowledge and technicalities but also help in building connections.

Additionally, participate in Moot Court Competitions involving your area of interest, attend conferences and events (either as a participant or volunteer), join diploma or online courses in specialized subjects, read important judgments and articles which will keep you updated. Lastly, be more active on LinkedIn and less active on Instagram, Facebook, etc.!

Legal Bites: Thank you so much for speaking with us, sir.