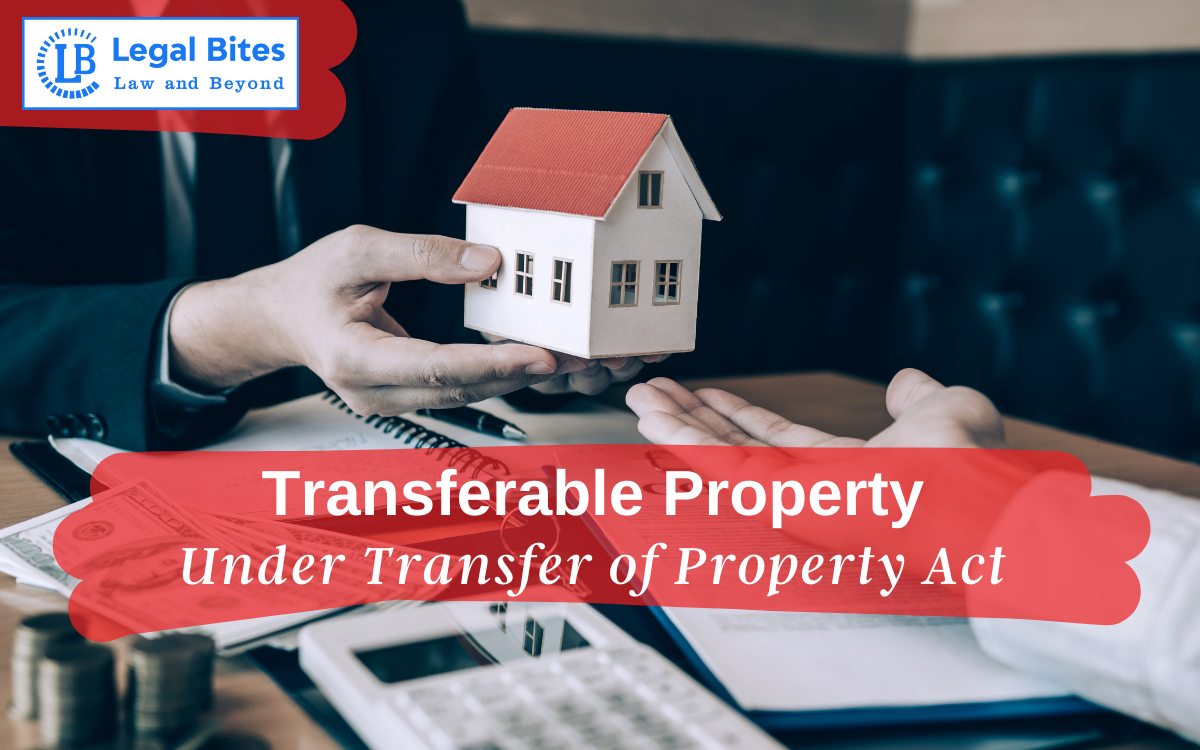 The TOPA is the primary legislation dealing with most aspects of legal transfer of both movable and immovable property in India, although it largely applies to immovable properties. While the TOPA is not exhaustive in that it does not contain the complete law for all types of transfers, it does incorporate basic rules of transfer that hold true regardless of the type of property they pertain to.[2] These fundamental principles relate to the nature of transfers in general, and the range of provisions that contain such principles are Chapter II, Sections 5 to 37 of TOPA.[3]

The provisions of Section 6 and 7 may be read together to establish the essentials of a valid transfer of property.

Prior to a discussion on transferable property, it is pertinent to define the term ‘transfer of property’ as mentioned in TOPA.

Section 6 of TOPA lays out the exceptions to the general rule of transferability, and the various categories of exceptions are mentioned under it.

The capacity of a person to transfer property and what that entails, is provided under Section 7 of the TOPA. Section 6 read with Section 7 tell us the essential conditions for a valid transfer.

Section 6: What May Be Transferred

a. Properties which cannot be transferred by law, for the time being, in force in India

The non-transferable properties have been divided into two categories. The first kind refer to those properties that cannot be transferred by any other law (barring TOPA) which is enforced in India. These may include provisions prohibiting transfer of certain property as mentioned under the Code of Civil Procedure, 1908, Hindu personal law or Muslim personal law. Section 6 recognises the non-transferability of property under other law in force in India, and thus such properties are also non-transferable under Section 6 of the Act. For example, under Muslim law, Waqf property have been regarded as properties which cannot be transferred and thus, will be included under Section 6.[12]

b. The properties which cannot be transferred otherwise as given in this Act

It may be noted that transferability is the general rule, and this is derived from the maxim, alienation rei prae fertur juri accrescendi, which is to say that alienation is more favoured by the law rather than accumulation.[13] So circulation of property is encouraged by the law rather than accumulation for its own sake, according to this rule. Properties should not be seen as non-transferable unless it is indicated by statutory provisions. In the case Kansing Kalusing Thakore v. Rabari Maganbhai Vashrambhai,[14]it was held that transfer of property can only be prohibited by statutory provisions and not by a mere judgment or direction alone.

The appellants, in this case, were challenging part of an order for land acquisition by the government in Maharashtra for setting up an educational institution, because it affected their absolute right over the land given in compensation for the acquired land. When the appellants in the case approached the Bombay High Court, it laid out certain strict conditions upon the appellants for a period of 15 years. Aggrieved, the case finally went up in appeal to the Supreme Court, which took issue with the Bombay High Court’s approach, and inter alia other observations, noted that:

“…the High Court also failed to appreciate the legal provision of Section 6 of the T.P. Act when the transfer of the property can be prohibited only by provision of the law and not by the judgment or direction referred in the writ petition under Article 226 of the Constitution of India.”[15]

Thus, the view of the Supreme Court as to Section 6 is clearly laid out in the above case.

(i) Chance of an heir-apparent succeeding to an estate,
(ii) Chance of a relation obtaining a legacy on the death of a kinsman, or
(iii) Any other mere possibility of a like nature.

Illustration: R has two sons D and F. R being very old and infirm, expects to die soon since he suffering from a terminal form of cancer. However, he is still alive. Expecting his father to die soon and because he is in need of money, D sells half of his share in R’s property to Y. However, this transfer is void because B is not the legal heir and will only be so after his father’s death- as of now, he is the only heir-apparent. Moreover, D would be entitled to his half-share in property only after A’s death and if A dies intestate.

The chance of a person obtaining a legacy due to the death of a kinsman is also not transferable as per the Act. Now, the settled law of wills is that a will operates only after the death of the testator, and only a legatee under the last (and final) will receive the legacy. Thus, as this is an uncertain event, and the legatee in question may not survive beyond death of the testator or the legatee might be excluded from the final will, the chance of a legacy is also made non-transferable.

Any other mere possibility of an interest of a like nature, cannot be transferred, for example the possibility of winning a prize in the future would fall under this category.

X has leased his land to Y for a period of 5 years with an express condition that Y shall not dig any well on the land. Y digs a well on the land. X asks Z to take possession of the said land from Y. That is to say, X transfer his right of re-entry upon the breach of condition by Y. However Z cannot take possession from Y because A has transferred the mere right of re-entry.

This clause refers to the interest in property that is intended for enjoyment to the owner personally and alone, and thus cannot be transferred by the same.[20] Religious offices such as that of a pujari[21] or mahant of a mutt[22] come under this clause because these offices are held by persons concerned on the ground of their personal qualifications.

The right to future maintenance if a restricted interest that is non-transferable. Maintenance may be granted to a person either by personal contract or by a court decree.[23] This clause was added by a 1929 amendment after there was judicial controversy as to the transferabiliuty of maintained granted by decree of court.

Illustration: A publishes defamatory statements against B. Under the law of tort, B has the right to claim damages. However, instead of suing A himself, B transfers the right to sue to C. C then sues A for an unliquidated sum. However, C’s suit is not maintainable as the suit is barred by Section 6(e).

The social policy underlying this prohibition is to ensure the dignity to the office held by a person appointed for qualities personal to him and getting salary for duly discharging his public duties. Thus, the public officer and salary of public officers are non-transferable in nature. However, this refers to the transfer of the salary at its source- not what an officer may choose to do once it is in his hands. In the case of Ananathyya v. Subba Rao, the X court ruled that a younger brother (a government servant) sharing part of his salary with his older brother, as consideration for educating him as a younger person, was not a violation of Section 6(f).[24]

Pensions and stipends are given to persons specifically for their personal contribution or achievement for example for freedom fighters, or government officials. These being restricted interests, are not transferable property under this Section.

While other clauses under this Section specified certain species of non-transferable interests, the present clause indicates certain disqualifications against transfer in certain situations. They may be determined by the use of the heuristic as follows:

This clause states that a tenant with an untransferable occupancy cannot transfer the same to another person. For example, a farmer of an estate where he is paying revenue to cultivate the land, cannot assign his interest in the agricultural holding under this clause.[25]

The present article has discussed the general rule of transferability in property law, and the categories of non-transferable interest under Section 6 of TOPA.