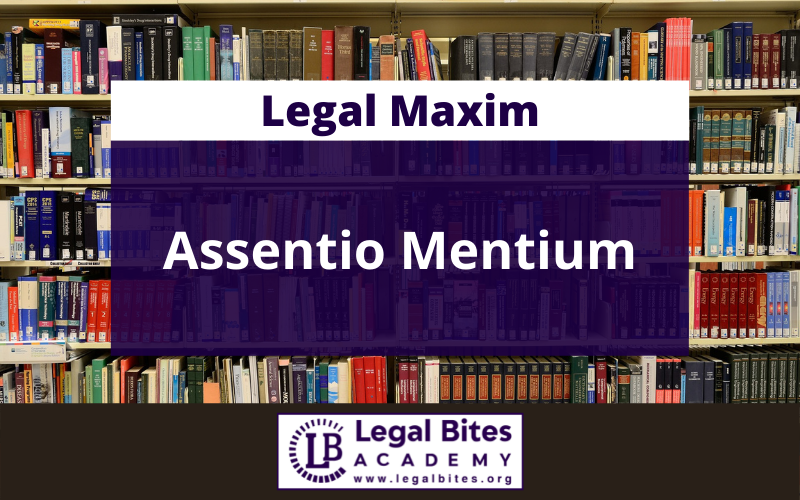 The legal maxim, ‘Assentio Mentium’ is meeting of minds which is either expressed or implied by both parties to a contract. This article explains the meaning of the maxim along with illustrations and case laws.

Assentio Mentium is a legal maxim that finds its roots in the Latin language. Assentio Mentium means ‘meeting of minds or mutual consent’. It is synonymous with the legal term consensus ad idem.

This maxim is most commonly used in Contract Law. It basically means that there exists a mutual agreement among all parties to a contract. Mutual consent/ agreement is one of the essential ingredients in order to constitute a contract as mentioned under Section 10 of the Indian Contract Act, 1872.

Section 13 of the Indian Contract Act talks about the importance of intention of the parties to the contract. Meeting of minds or consensus ad idem is the pre-requisite for entering into the contract.

It must be noted that the consent to the contract must be free. Consent is not deemed to be free if the agreement is not induced by:

If the contract is induced by either of the following it becomes voidable at the option of the aggrieved party.

In the case of Smith v. Hughes[1], the court held that mere silence does not mean fraud unless there exists a special trust or confidence between the parties or the circumstances of the case imply the same.

In the case of Brij Mohan & Ors. v. Sugra Begum & Ors[2], the court held that even though oral agreements for sale can be considered as valid contracts, a huge amount of burden lies on the plaintiff. The plaintiff has the burden of proof to prove that there was consensus ad idem at the time of the contract.