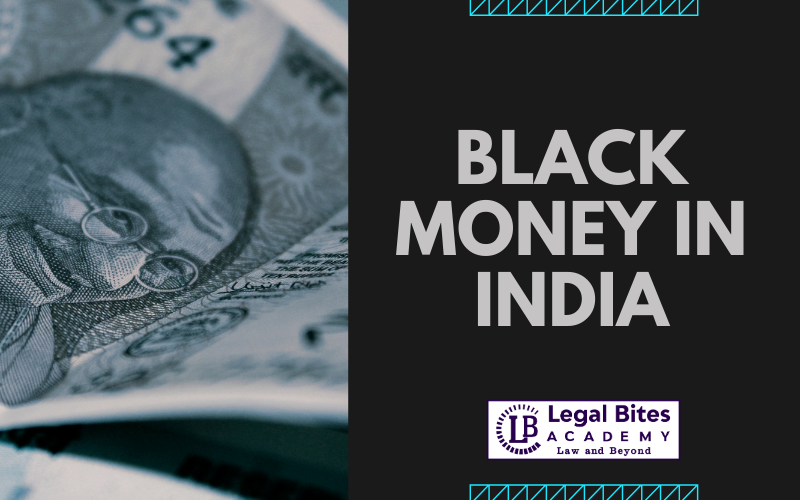 This article aims to provide a brief overview of the issue of black money in India, with a special focus on the ways in which it is created and possible solutions to it. The scourge of black money is nearly as long as the modern Indian state—if not longer—and is deeply embedded in society. The state annually loses out on potentially billions in revenue because of the sheer value of money stashed abroad.

To aid in clarity, this article is further divided into four sections. The first one is an introduction wherein the author explains the concept of black money in brief. The second section contains a more precise definition of the term and a short note on the nature of black money. The third section lists the factors that go into the creation of black money and the fourth looks at possible solutions to the issue. Lastly, the author provides a conclusion to the article.

I. Introduction – Black Money in India

Black Money in India, is a term used to describe money that is illegitimately owned. This can be due to primarily two reasons. One, the money was made whilst performing illegitimate activities such as drug trafficking, organized crime, terrorism, amongst several others. Two, the money is not reported to the authorities for purposes of tax collection and, therefore, is illegitimately untaxed income.[1]

Black money has long been the subject of heated political debate in India. Successive governments have been accused of turning a blind eye to black money, and several politicians, movie stars, sportspeople, and other celebrities have been reported to have black money stashed abroad, mostly in Swiss banks. Unofficial reports estimate Indian black money abroad to be in the trillions of dollars.

Black money has also been the subject of numerous reports—both from academia and government—the better to understand its nature, scope, and possible solutions. Given its political, social, and economic significance, it is important to examine all of those sections in detail.

Though relatively hard to come by, a definition of black money proposed by the government is “assets or resources that have neither been reported to the public authorities at the time of their generation nor disclosed at any point of time during their possession.”[2]

Thus, by its very definition, black money can include both the bounty generated by the mafia as well as unreported income by a middle-class professional to save on tax. However, when referred to in the media and political discourse, black money typically refers to large sums of money stashed away by wealthy people, and not small sums which most Indians try to save tax on.

We will discuss the various methods of creating black money in the following section.

III. Factors that lead to the Creation of Black Money

There are numerous factors and ways in which black money can be created, a few of which are listed below:

A common way by which black money is generated is through illegal activities such as smuggling, sexual crimes, embezzlement, corruption, illegal mining, trading in contraband substances, etc.

While sometimes owners of black money simply do not declare or report their entire income, some tend to use sophisticated deception methods to hide their black money. This is through the manipulation of their financial records.

There are numerous ways in which owners of black money can manipulate accounts including: out of book transactions; parallel books of account; under-reporting, etc. These methods allow for transactors to conduct financial trade without it ever being on the books. This, to the taxman, means that these transactions never took place, since there is no written record for it.

Land and real-estate transactions work in the same way as jewellery transactions, only on a much larger scale. Given the huge monetary value of some pieces of land, the real estate industry has a lot of sellers and buyers who pay in cash to avoid having to pay tax on the eventual sale of the piece of land or property.

Owners of huge sums of black money take advantage of this practice to convert their illegitimately obtained black money into land or real estate, which, if done discreetly enough, will ward off any official suspicion.

Lastly, the phenomenon of tax havens or, as they are more euphemistically called, “offshore financial centres,” are a significant factor in the creation of black money. Black money, once generated, either from illegal activity or from lack of disclosure, is typically stashed away, in the infamous Swiss banks.

However, it is not just Switzerland: the Cayman Islands, Ireland, the Isle of Man are all tax havens in some form or the other, and, importantly, don’t have to report illegal money in their country to Indian government authorities. This is the main reason why it is so difficult to bring back black money abroad.

There are several possible solutions to the issue of black money in India.

One is strengthening the financial agencies and legislation concerning tax collection. Many a time corporates and wealthy individuals simply take advantage of existing loopholes in Indian tax law—instead of really resorting to blatantly illegal activity—to avoid pay taxes on their income.

The other is liberalizing the licence and permit regime even more than the 1991 reforms. Numerous reports suggest that it was the heavily bureaucratized tax regime pre-1991 that resulted in many individuals trying to evade tax. Making it easier and less cumbersome, not to mention less expensive, to pay tax might encourage less tax evasion.

Amnesties are another government method. Through this, the government offers amnesties to those who confess to having stashed money abroad, and the individuals only pay the statutory tax on the income. This is a good way to encourage individuals to come forward and pay their fair share to avoid even more disastrous consequences.

Black money represents a particularly challenging concern for India’s lawmakers. Estimated to be roughly in the trillions, the presence of black money abroad represents a significant loss of a revenue source for the government. Moreover, it is also embarrassing for the government to have let wealthy people dodge taxes while the poor and middle classes are forced to pay their fair share.

The numerous ways in which black money is generated make it hard for the government to crack down on it. However, there are several proposals floated which, though politically tough to implement, could go a long way towards reducing the severity of the problem.