Dicey’s Concept of Rule of Law- An Analysis

This article titled ‘Dicey’s Concept of Rule of Law- An Analysis.’ is written by Jagrati Gupta and discusses the concept or rule of law as laid down by Dicey. I. Introduction “The bedrock of our democracy is the rule of law and that means we have to have an independent judiciary, judges who can make decisions independent of the… Read More » 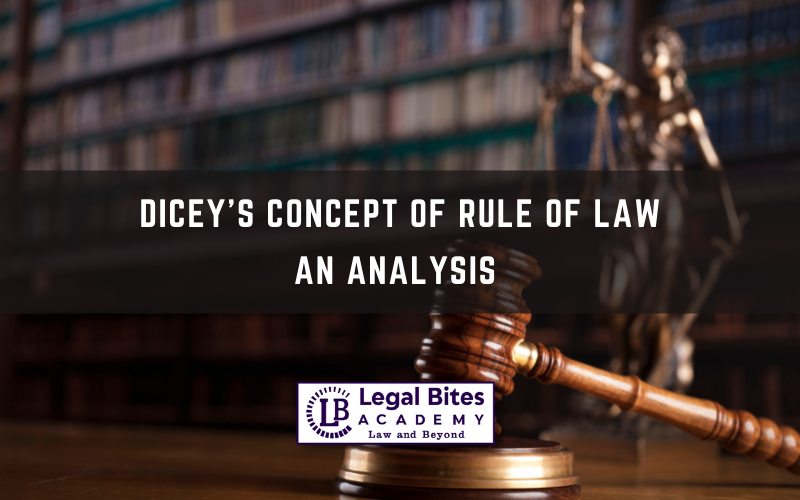 This article titled ‘Dicey’s Concept of Rule of Law- An Analysis.’ is written by Jagrati Gupta and discusses the concept or rule of law as laid down by Dicey.

“The bedrock of our democracy is the rule of law and that means we have to have an independent judiciary, judges who can make decisions independent of the political winds that are blowing.” ~ Caroline Kennedy

Can there be any development and progress in a society where a certain group of people receive special treatment at the expense of others? Will society be called civilized if there is rampant peremptory use of power by the administrative authorities? Will society be able to perform its functions if there is no regard for the law of the land? The existence of a civilization is not only determined through the formation of rules or laws but also through their observation and general respect for them. This is called the principle of the “Rule of Law”.

The concept ‘Rule of Law’ popularised by A. V. Dicey is one of the most significant and applauded principles all over the world with an exclusive aim to bulwark the rights of humans.

For instance, if a victim of a crime is coerced into withdrawing his/her complaint against the offending person or is threatened into abstaining herself/himself from seeking justice for the offence committed against him/her, it constitutes the breach of rule of law or if the legislature ordains a statute which in any way circumscribes or violates the fundamental rights of people like the freedom of speech and expression is a violation of the sanctity of “Rule of Law”.

The underlying objective of this research article is to dive into the depth of this doctrine and analyse its various aspects. In the succeeding paragraphs, an endeavour has been made to concisely analyse the conceptualisation, evolution, application, merits and criticisms of Dicey’s ‘Rule of Law’.

The cogitation behind the concept “Rule of Law” is very dynamic and possesses a perfect mechanism to check absolutism and anarchy by giving an upper hand to only the law of the land. The peremptory use of power is prevented through this principle as law which is formulated after a thorough discussion and contemplation by legislative bodies gains precedence over any other authority. Therefore, rule of law facilitates and maintains the essence and true meaning of democracy.

“Rule of Law” regards all human beings as equal and that everyone deserves equal protection of the law. It states that the law of the land takes supremacy over all biases and prejudices and to maintain this any person irrespective of class, caste, gender, etc., will be punished if he breaks any law.

Plato defined rule of law as a law supreme in nature dominating every class of people.

Aristotle believed that law should be the final sovereign and no one should be above it.

Edward Coke’s definition of rule of law: Rule of law means the absence of arbitrary power on the part of the government and that no one should be punished except for a specific breach of law substantiated in the ordinary legal manner before the ordinary courts of land.

According to Albert Venn Dicey, “the rule of law means the absolute supremacy or predominance of the regular law as opposed to the influence of arbitrary power and excludes the existence of arbitrariness or even of wide discretionary authority on the part of the government.”[1]

III. Origin and Evolution of Rule of Law

The concept of “Rule of Law” is not novel, rather its roots go back to the 6th century BC, the epoch of Plato and Aristotle. During this time, Greece and Rome were delved into a series of philosophical discussions about the importance of law in society. In the book The Laws, Plato recognised the notion that government should be subservient to the law.

Aristotle, his student carried forward this idea and ameliorated it in The Politics where he connoted “rule of law” with reason and “rule of man” with passion, importing that government should be bound by law in order to eliminate arbitrariness.

During the promulgation of the Magna Carta in 1215, this concept was recognised after a long series of revolts by the nobility against the king following his attempts to extract more resources from them to fund the war in France. One of its noteworthy provisions declared that no person should be deprived of their liberty or property “except by the lawful judgement of his equals or by the law of the land”.

John Locke, father of liberalism formulated the “social contract” theory in his book Two Treatises of Government (1690) under which he argued that individuals had voluntarily coincided to surrender their natural rights in lieu of an assurance that their personal freedom and liberty will be protected by a governing authority through the promulgation of various laws. Therefore, he asserted the importance and supremacy of laws over any governing authority.

Montesquieu further refined this concept in his book L’Esprit des Lois (1748) where he formulated his theory for separation of powers in which he divided the powers of the government into three branches, so that avoid the accumulation of all the powers under one authority. Unlike the previous scholars, Montesquieu paid extreme importance to the role of the judiciary which should check the unbounded powers of the executive and legislature, to ensure rule of law.

Sir Edward Coke is credited for framing the word “rule of law” derived from the French phrase ‘La Principe de Legalite’ which means the principle of legality. In the nineteenth century, British constitutionalist Albert V. Dicey popularised the phrase “rule of law” through his writings.

In his book Introduction to Study of the Laws of the Constitution (1885) where he explained his three principles of the “Rule of Law”. In the Austrian Constitution, Hans Kelsen also included this concept (Rechsstaat), according to which all laws are subject to compliance with the constitution and government action is constrained by this legal framework.

With the adoption of the Universal Declaration of Human Rights in 1948, the “rule of law” was recognised as a global ideal and the General Assembly of United Nations proclaimed that “it is essential if a man is not to have recourse as a last resort, to rebellion against tyranny and oppression, that human rights should be protected by the Rule of Law”.

Dicey’s principle of “Rule of Law” forms an imperative pillar for sustaining democracy and basic human rights but to apply it triumphantly, analysis of its merits, demerits and its application in different case laws around the world will assist us in understanding how it should be applied and how it has been accommodated in different democracies.

1. Excellencies of “Rule of Law”

2. Demerits of Rule of Law

VI. Application of Rule of Law in India

Dicey’s concept of ‘Rule of Law’ has been embraced by the Indian Constitution and by a humungous range of judgements. Our Common Law system has been borrowed from British Jurisprudence, the basis of which is the ‘Rule of Law’.

1. Some of the articles of our Constitution states its application and they are:

2. Role of Indian Judiciary in the application of ‘Rule of Law’

VII. Case laws applying Rule of Law around the world

Dicey’s doctrine of ‘Rule of Law’ is fundamental to the constitutions of most democracies. Although the world has treaded a long way since the prejudicial and biased colonial era but to receive equal treatment is still a far- fetched dream for many people who are hitherto bound to live an oppressive and unfair life. Thus, constructing landmark concepts and doctrines aimed at developing the society plays only a partial role but to bring a change in actuality expects an endeavour from all the sections of society.

Jagrati is a Law student at Banaras Hindu University, Varanasi.