Understanding the Fundamentals and Concepts of Money Laundering

This article titled ‘Understanding the Fundamentals and Concepts of Money Laundering.’ is written by Mayank Shekhar and attempts at providing an understanding of the concept of money laundering. I. What is money laundering? Money laundering (ML) in layman languages means a process by which individuals involved in criminal activities launder their assets, money and other profits in order to… Read More » 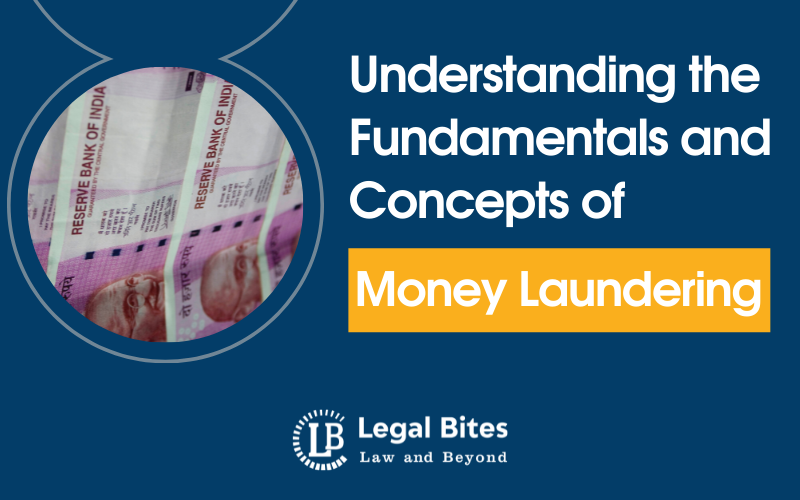 This article titled ‘Understanding the Fundamentals and Concepts of Money Laundering.’ is written by Mayank Shekhar and attempts at providing an understanding of the concept of money laundering.

I. What is money laundering?

Money laundering (ML) in layman languages means a process by which individuals involved in criminal activities launder their assets, money and other profits in order to make them appear legal and surpass the legal barriers. It is an attempt to transform dirty money into clean money.

There are three stages in which money laundering is executed, which are as follows:

II. Why is money laundering harmful?

Money laundering is an imminent threat to the economies of developed and developing countries, even the underdeveloped countries face substantial losses because of money laundering. It affects enterprises, economies, and society globally and locally.

Growing numbers of developing regions are becoming more attractive targets for money laundering operations as their economies and financial sectors open up to the world. Money laundering generates unanticipated swings in money demand, as well as substantial variations in global capital flows and currency rates, as a result of the activities of organised crime.

Even after analysing the plausible consequences to prevent the effects from being in existence for a long time, governments and executives in power will end up investing in a subsequent higher ratio on policies regarding anti-money laundering, also the enforcement of these policies will lead to greater havoc as laws, policies, and legislations are highly dependent of subjectivity and prone to open-ended interpretation.

Leading from this, the middle class and lower-middle-class sections of the society suffer heavily as public expenditure declines, and this further adds up to segmenting of society in such a way that under-developed and developing countries suffer.

Moreover, as originally demonstrated, criminals and their illegal activities have a negative impact on the productivity of businesses. As a consequence, the total quality of services given to customers suffers as a result of this decline in productivity.

Customers and newly found businesses, startups and naive founders are unable to establish their trust in certain organisations to deliver the services they need as a result of this.

III. What can be an efficient resort to stop money laundering?

The Financial Action Task Force was one of the earliest legally-established anti-money laundering organisations to be established (FATF). Since the increase in terrorist incidents, the FATF has expanded its domain and range to include monitoring of terrorists and their sources of funding through which they are able to execute these heinous plans.

The aim was to suppress the illegal funding which FATF suspected would lead to the decline of these terrorist attacks all over the world. Recently, Bitcoin has come under the spotlight due to the fact that it allows its users and profit holders to remain anonymous and hides their identities even to the microscopic level. Criminals now have a lower-risk technique of conducting their transactions as a result of this development.

Financial institutions are guided by principles when it comes to adhering to systems that are aimed to detect and prevent money laundering. All individuals employed in banks or financial regulatory organisations are offered a significant level of expertise and fundamental knowledge in order to detect and monitor questionable client conduct.

Larger financial institutions and government organizations, now even big enterprises, and corporate giants also have dedicated and fully functioning fraud and money laundering departments to track down inside traders and prosecute perpetrators.

The most effective resort still would be to create an institutionalised set of rules from the end of legal systems and global financial institutions as well as policies governed and functioning by governments and appointed legal executives, this construction of framework is not alone capable of penetrating the rock-solid layering through which money laundering is executed but the implementation of same will be breakthrough in the change we seek.

Rather than trying to criminalise all kinds of offences, it is better to concentrate on limiting the scope of plausible offences. The gravity of these offences must also be assessed financially. The international community should debate and adopt a universal definition of Money Laundering, taking into account basic principles of criminal law, under the auspices of the UN.

1. What is Anti-Money Laundering? Available Here.

4. What are the Effects of Money Laundering? Available Here.