This article on ‘Conservatorship and Adult Guardianship through Britney Spears case’ is written by Pranava Pishati and focuses on the concepts of conservatorship and adult guardianship in the light of the Britney Spears case. I. Introduction In recent times we’ve all come across the hashtag #freeBritney on numerous social media platforms. To provide some context on who is… Read More » 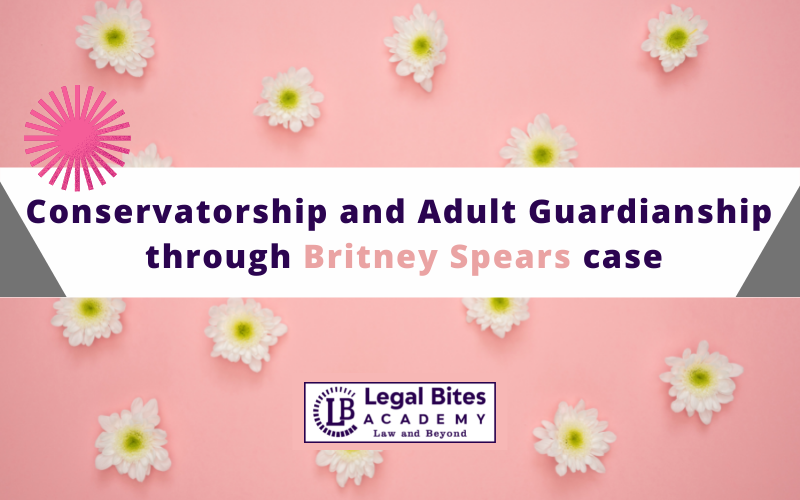 This article on ‘Conservatorship and Adult Guardianship through Britney Spears case’ is written by Pranava Pishati and focuses on the concepts of conservatorship and adult guardianship in the light of the Britney Spears case. I. Introduction In recent times we’ve all come across the hashtag #freeBritney on numerous social media platforms. To provide some context on who is Britney and why are people spreading tweets about liberating Britney spears? Britney spears is a...

In recent times we’ve all come across the hashtag #freeBritney on numerous social media platforms. To provide some context on who is Britney and why are people spreading tweets about liberating Britney spears? Britney spears is a popular American singer/songwriter who is widely acknowledged for influencing teen music in the 1990s and early 2000s.

She had multiple public mental breakdowns in 2008 and was diagnosed with dementia; since then, she has been subjugated by conservatorship abuse. Her father James Spears controlled the entire conservatorship, which she had been a part of.

This well-known singer has never made a decision on her own since the court issued conservatorship. She was constrained by the conservator’s/guardian’s terms in everything she did, from selecting shows to deciding where she resides. With the help of the Britney Spears case, this article provides a rudimentary introduction of conservatorship and its abuse.

In other states, these circumstances are referred to as conservatorships. There are several governments that make a clear distinction between the two terms. but with regard to Britney spear’s case, both guardian and conservator are similar.

When a person is diagnosed with dementia or Alzheimer’s, the courts believe that they are unable to make significant life decisions and they provide legal authority to act on their behalf. Before their condition advances, the affected person normally contributes to determining who the conservator is. In the absence of someone with the legal capacity to act a court may appoint a guardian.

The court may appoint the same individual to manage the diagnosed person’s life and property. In Britney Spears’ conservatorship, it is now split into two parts – one is for her estate and financial affairs, the other is for her as a person. But earlier her father was in charge of both the parts.

The individual’s guardian is authorized to make decisions concerning the diagnosed person’s life and person, including health care decisions and place of residence. The guardian is responsible for arranging for the ward’s personal care, upkeep, and support of medical and other essential services. The activities of a person’s guardian must always be in the best interests of the ward.

Guardian of the estate is in charge of the diagnosed person’s financial affairs and is entrusted with managing, protecting, preserving, and disposing of the ward’s estate in accordance with the law and, like the guardian of the person, in furtherance of the ward’s best interests[1]. The conservator is required to use the estate’s assets to provide for the care and maintenance of the ward or a person to whom the ward is legally obligated to support.

Normally, the conservator is given the authority to make decisions about the person’s property and estate as if he or she were the owner, but state law may impose some limitations. Some states, for example, prohibit conservators from executing a will on behalf of the ward. State law may allow or ban a conservator from transferring assets for specified circumstances, such as Healthcare eligibility.

Britney Spears began acting strangely after her divorce from Kevin Federline and she lost custody of their two children in 2007. A slew of public events aroused concerns about her mental health. She was committed to the hospital twice in 2008 under a temporary psychological examination ruling, including following an incident in which she allegedly refused to relinquish her sons during a police confrontation[2].

Jodi Montgomery, a caring expert, temporarily took that place, but Britney Spears has insisted that this be permanent. However, the singer’s lawyer requested a hearing early this year so that she could address the court directly about her conservatorship.

Britney pleaded with the judge in court on June 23, 2021, to lift the “abusive” conservatorship so she could marry and have more children. “I want to stop this conservatorship without being assessed,” she added. Spears slammed the agreement, claiming that it required her to use birth control to avoid becoming pregnant.

“This conservatorship is causing me far more harm than good,”. “I’m entitled to a life.”

Britney doesn’t want her father to take over as conservatorship director. She claimed that she prefers Jodi Montgomery, who’s been managing her conservatorship since her father’s departure due to health problems in 2019, to remain in that post.

Britney stated through her lawyer in a later filing that she eventually wants “power and approval to pursue opportunities based on professional responsibilities and activities including but not limited to performing, documenting, recordings, tours, TV shows as long as they are authorized by the conservator of the person and the Conservatee’s medical team.”

Britney’s petition to expand her legal team in her conservatorship battle has been approved, replacing the court-appointed lawyer who had been representing her since 2008. Her father argued against the request claiming that it would cost his daughter too much money.

The next hearing is currently scheduled for September 29th, but Britney seeks that it be rescheduled to August 23rd, or as soon after that as possible[3]. According to Deadline, Los Angeles Superior Court Judge Brenda Penny refused Spears’ plea to move up the next court hearing questioning Jamie Spears’ continuation in her conservatorship.

IV. The Impact of a Lack of Opportunity to Make Decisions

There is no single test that can establish whether or not you have dementia. Based on cognitive exams that assess your capacity to think. They concentrate on memory, counting, reasoning, and language abilities[5]. They expose people to conservatorship, which can be harsh in some cases, in which conservators exploit the diagnosed persons financially and personally based on tests that are less accurate in determining whether or not they have dementia.

Britney Spears was exposed to an “abusive conservatorship” saying she had dementia, and she was compelled to date whomever her father chooses due to the terms, she was forced to use birth control pills, was not allowed to marry someone of her choice and she was forced to do her shows restlessly when she was unwilling to do so. These terms she was forced to accept were clearly infringing on her fundamental rights.

Even though the right to privacy is not explicitly stated in the Constitution, the Ninth Amendment provides that the designation of certain rights in the Constitution does not imply that other, unnamed rights are not “retained by the people.”

The Supreme Court has long ruled that the Bill of Rights protects certain liberties that are “fundamental to an individual’s ability to participate in society,” despite their indefinite nature. These include the right to privacy, freedom of movement, the right to vote, and the right to marry.

The United States Constitution’s Bill of Rights grants individuals the right to personal autonomy, which means that a person’s personal decisions are none of the government’s business. This right, which is part of the right to privacy, includes parental decisions, such as a woman’s right to choose whether to complete or terminate a pregnancy, as well as the right to use contraception, freedom from forced sterilization, and freedom from employment discrimination based on childbearing capacity.

Many people under conservatorship are unable to make decisions regarding the repercussions of living in a more restricted communal environment. Several respondents stated that such a living environment influenced their views on decision-making and self-determination. People would be unable to learn from their mistakes if they were not allowed to make them.

Conservators take advantage of dementia patients financially and personally, relying on tests that are less precise in establishing whether or not they have dementia. The courts should limit the conservator’s power so that they do not infringe on their fundamental rights.