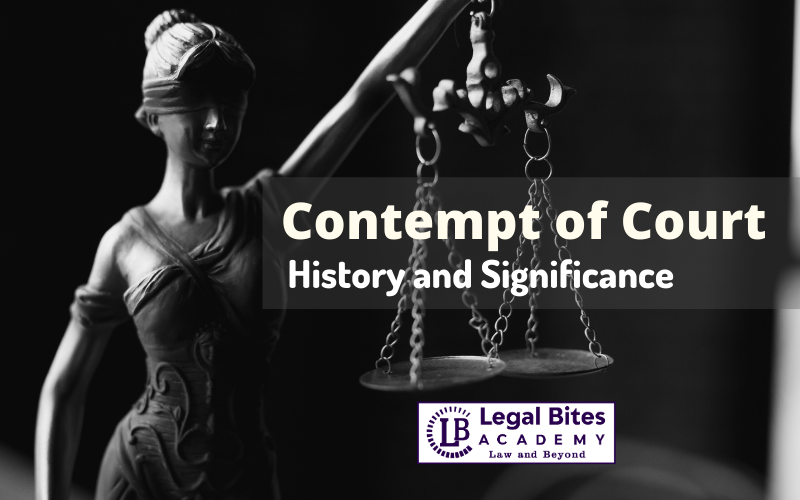 This article provides a brief explanation of the offence of contempt of court in India. Contempt of court is a controversial offence that allows judges to fine or imprison anyone who acts or speaks in defiance of a court’s authority. Intrinsically nuanced, judges have often taken a ham-fisted approach to contempt, initiating proceedings of contempt against notable people only to drop them or fine them nominal amounts. However, the offence is important in a court’s panoply as it provides against violations of court judgements.

The article is divided into five sections. The introductory section provides a brief primer to contempt of court in India, the terminology of the offence, and the Contempt of Courts Act, 1971. The statutory definition section specifically quotes from the Contempt Act to explain civil and criminal contempt. The next section delves briefly into the history of contempt of court in India. The fourth section explicates the scope of contempt in India, and the fifth mentions two important judgements featuring contempt of court. Finally, the author concludes the article on contempt.

Contempt of court in India, sometimes simply referred to as “contempt,” is of two kinds: civil and criminal contempt. Simply put, contempt of court is any act that is offensive to a court’s authority, dignity, or justice. The act of committing contempt is referred to as “contemn,” and the offending party is a “contemnor.” Contemnors can be punished with a fine or jail time.

Parliament has set forth the definition and cases that would be counted as contempt in a statute known as the Contempt of Courts Act, 1971.[1] This prevents overzealous judges from abusing their authority and punishing anyone who criticizes judges or the courts. However, contempt of court has a chequered history, with courts frequently weaponizing it, which we will examine in some detail below. Importantly, in India, subordinate courts can punish anyone for contempt—it is the high courts that have the power to do so.

The Contempt of Courts Act (1971) (hereinafter “the 1971 Act”) specifically delineates the meaning of civil contempt and criminal contempt.

Civil contempt is defined as “willful disobedience to any judgment, decree, direction, order, writ or other processes of a court or wilful breach of an undertaking given to a court.”[2] Thus, anyone who intentionally disobeys any court’s directive or process would be brought on charges of contempt of court.

Criminal contempt, on the other hand, is held to a higher standard. The 1971 Act defines criminal contempt as: “the publication (whether by words, spoken or written, or by signs, or by visible representations, or otherwise) of any matter or the doing of any other act whatsoever which—

Thus, criminal contempt does not only connote a violation of a court directive, but also scandalizes, prejudices, lowers, or interferes with the authority and administration of justice.

The history of contempt of court in India has a long history, dating back to the years of the British Raj. “Courts of record”—essentially courts where the proceedings were recorded, typically high courts—were bequeathed with the power to punish contemnors for contempt of court by the colonial government.

An important piece of legislation during the Raj concerning contempt of court is the Contempt of Courts Act, 1926.[4] This statute explicitly granted permission to the high courts to punish individuals for contempt against courts subordinate to them.

“(2) Nothing in sub-clause (a) of clause (1) shall affect the operation of any existing law, or prevent the State from making any law, in so far as such law imposes reasonable restrictions on the exercise of the right conferred by the said sub-clause […] in relation to contempt of court…”[5]

Critics of the concept of contempt of court argue that its berth is too wide. Contempt of court is wide enough to encompass different acts, ranging from yawning to outright disregarding a court’s order.

The 1971 Act lists instances that would not be included within the purview of contempt of court:

A 2006 amendment added another defence of truth, provided it is in the public interest.

However, the issue with these defences is that words like “fair” are subjective, and can often be interpreted in extremely narrow ways by an overly punitive court. They do not always protect citizens or lower court judges from arbitrary actions by higher court judges.

The rest of the acts of contempt can be penalized by the competent court inasmuch as it does not conflict with the provisions of the 1971 Act.

There is also a one-year statute of limitations—i.e. a case of contempt of court cannot be initiated after the expiry of one year of the transgression.[7]

These two cases concerned two editors from the Times of India and the Indian Express. These editors had criticized the infamous ADM Jabalpur case. Chief Justice M.H. Beg had initiated contempt proceedings against these journalists, however the case was subsequently dropped as the other judges on the bench did not support it.

This case was notable for the controversy it generated. Prashant Bhushan, a noted PIL lawyer, posted a tweet on the microblogging Web site Twitter about the current Chief Justice of India Sharad A. Bobde. Bhushan criticized the selectivity with which the apex court was picking up cases, and chastised Justice Bobde for “denying citizens their fundamental right to access Justice [sic].”

Though offered the chance to apologize to the Court, he refused. Bhushan was ultimately convicted by the Supreme Court, but fined only Re 1, which he paid the Court. The decision to initiate contempt proceedings and the ultimate decision of convicting Bhushan generated intensely negative responses on social media and elsewhere. Presently, a challenge regarding the constitutionality of contempt of court is pending before the Court.

Contempt of court, in conclusion, is a wide-ranging offence which includes a diversity of acts within its ambit. The sheer broadness of its scope can often be a cause for concern, with some judges taking advantage of the law to quell any criticism levelled against them.

Moreover, there are also some fundamental questions that ask whether offences like contempt of court—or at least specific components of contempt—are compatible with notions of liberal democracy, which India lays claim to. The right of free speech, enshrined in Article 21 of the Indian Constitution, should, in an ideal world, allow for citizens to level any criticism against judges or the court without fearing retributive action.