Introduction Activism is much celebrated but less cerebrated. The urge of bringing a socio-political change in society pens down the concept of Activism.[1] In India, activism is prevailing from the time of Gandhi and Jinnah to these current protests against CAA & NRC, but earlier activism was very difficult due to non-availability of proper communication channels throughout the… Read More » 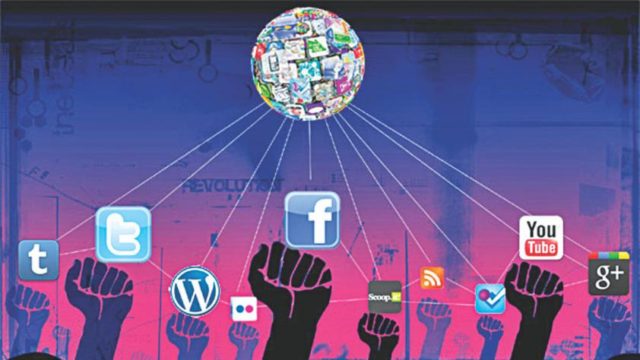 Activism is much celebrated but less cerebrated. The urge of bringing a socio-political change in society pens down the concept of Activism.[1] In India, activism is prevailing from the time of Gandhi and Jinnah to these current protests against CAA & NRC, but earlier activism was very difficult due to non-availability of proper communication channels throughout the country. Due to the emergence of technology commuting information amongst people regarding an issue is not a big task.[2] This is where Cyber Activism helps us out in reaching the target audience.

Cyber activism means using social media to commute people about an idea. It allows for the globalization of intersectional social justice platforms.[3] It is the medium which connects the thoughts of changing the world with the world. Whether you want to arrange funds, sign petitions online or use social media to highlight political scenarios in the country, a click is more powerful than the trigger of a gun.

The issues which are ignored, faded by media or graved by the political parties are been uplifted by some human right activists through the mode of social media communication in order to report, document or bring the attention of the masses.[4]

I. Link between Self-professed Activism and Self-proclaimed Morality

There is a link between self-professed activism and self-proclaimed morality is how a person tends to do activism upon a belief that he has a duty to make a change which actually is imposed upon him by some illusionary authority forcing him to make a change.[5] The author also believes that activism is the result of either a cause or an effect.

Activism can be the effect of the cause and can also be the cause of the effect. In a society where there are many causes and effects prevailing regarding one issue, it leads to a lot of activism and which further leads to people forgetting the actual motive behind their action and what they do is activism for a reason which is unknown to them.

II. The Role of Social Media in framing Public Opinion

In the information age, social media plays a significant role in influencing the governmental decision, making and shaping the relationships among citizens, government, politicians, and other socio-political actors.[6] In the present status quo where cyber activism is playing a major role in creating or changing the opinion of the masses, fake news has also come into the picture. Since there is no mechanism by which you can stop or restrict people from putting posts and opinions over social media, fake news cannot be restricted.[7]

The presentation of differential opinions over social media application affects the present status quo in creating public opinion within the country. Most of the population uses social media as a source for their entertainment.[8] The news or headline which pops there in the form of meme is presumed to be true by that individual without even verifying it form a reliable source.

Looking at the recent happening of Citizenship amendment act, most of the people who are protesting against it are not even aware of the actual content of the act. They are merely protesting because they saw it on their social media platform that some human right activist is protesting against it. The impact is such that people after seeing a meme, travels from places to places to throw stones or to march against the government. They do this because they feel there is a self-proclaimed morality to act in this regard.

III. The Tussle Between the Leftist & Rightist

The reason behind that is people tends to spend more time on social media than newspapers. So, in order to gain support of the masses, both of them start their social campaigning. The meme or news which reaches the eyes of the reader first, wins the race.

In the outset, cyber activism looks like an extravagant concept as it encourages smaller communities to raise their voices to the larger population in every aspect. But looking at the broader perspective, it is seen that it also promotes the ethos of fake news due to which there are countless opinions of an issue.

This not only creates a confusion in the mind of people who are reading multiple posts but also encourages the tussle between the leftist and rightist.

The author is a law student at the Institute of Law, Nirma University