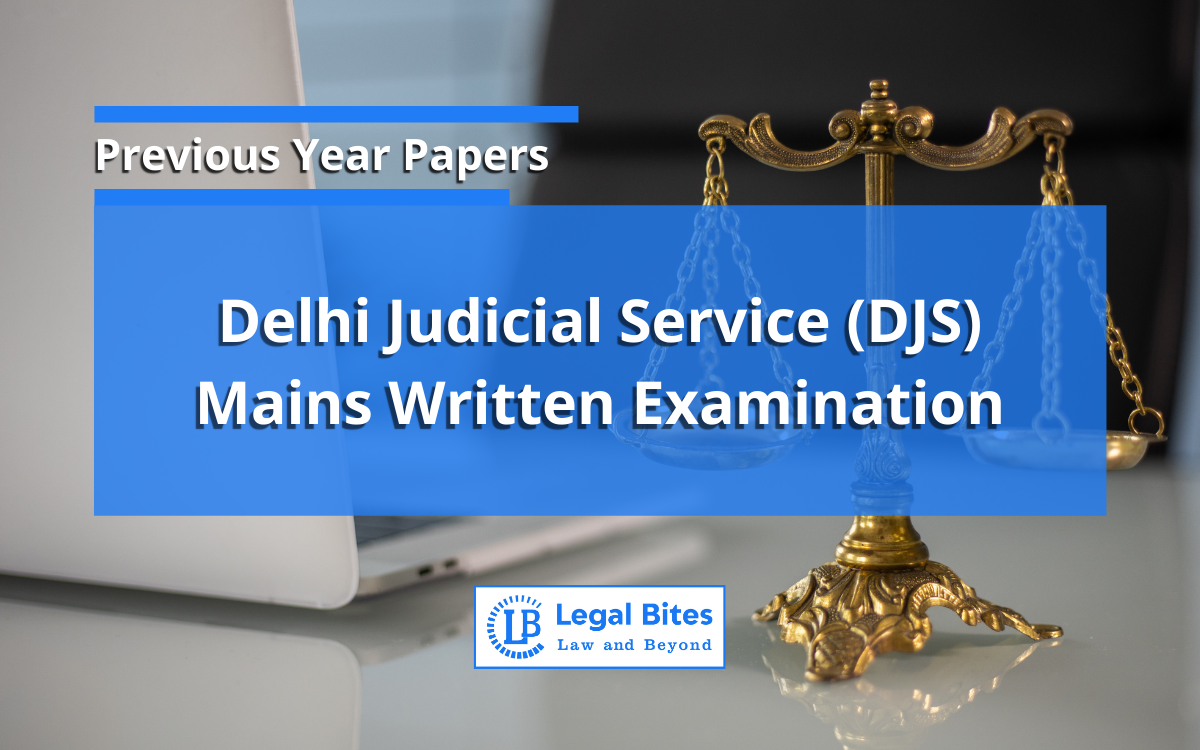 Only practising the authentic question papers will give you a real feel of the pattern and style of the questions. Here’s Delhi Judicial Services Mains 2018 Previous Year Paper (Civil Law – II).

The suit was fixed for hearing on 17th April 2016 before the District Judge, Delhi. On that date, Kehar Singh did not appear before the Court in the case. However, Ram Singh had appeared on that date in the Court.

The suit for possession filed by Kehar Singh was dismissed in default due to his non-appearance.

Advise Smt. Prem Kumari, if the suit for possession filed against her by Kehar Singh is maintainable or not. Give reasons quoting the relevant legal provisions. (10 Marks)

Surender Kumar files a suit for recovery on the basis of the promissory note at Srinagar against Naresh Kumar and Raj Kumar. They both in their written statement take a preliminary objection to the jurisdiction of the court at Srinagar to try the suit asserting that the defendants do not reside in Srinagar.

Decide the objection with reasons. (10 Marks)

Prem Kumar takes a preliminary objection, that once Ramesh Chand has availed the remedy of appeal and had withdrawn the same, the Trial Court cannot review its order. Decide. (10 Marks)

Whether the application for substitution of legal representatives within time? Give reasons. (10 Marks)

A uses B for specific performance of an agreement to sell by B to A of immovable property. It is the case of A, that:

A files a suit against B for partition of immovable property owned by the father of the parties who has since died. B contests the suit claiming that he father has left a registered Will bequeathing the property, exclusively to

During the testimony of the official from the office of the Sub-Registrar, an exhibit mark is put on the original Will produced by B, subject to objection of the Counsel for A. Decide whether the Will has been proved. (20 Marks)

Decide the said objection of B. (20 Marks)

A institutes a suit for a permanent injunction to restrain B from dispossessing him from an immovable property pleading:

Issues are framed in the suit with one of the issues being with respect to the validity of the Will of C set up by B.

B in his evidence, besides examining himself examines only one other witness, D, who deposes that C had called D to the house of C and informed D that C had signed his Wil and also got it signed from E as a witness but was advised that a Will has to have at least two attesting witnesses and wanted D to sign the Will as a witness. D further deposed that he had accordingly signed as a witness.

Decide whether the Will has been proved in accordance with law. (20 Marks)

A, claiming to be the owner of immovable property, sues B for recovery of possession of that property claiming that B, about 20 years prior to the institution of the suit, was permitted as a licensee to occupy the property; the license of B was terminated one year prior to the institution of the suit B, despite promises to vacate the property has failed to do so.

B contested the suit pleading that:—

(a) the suit was barred by time;

(b) that A in the plaint itself has admitted the possession of B for nearly 20 years prior to the institution of the suit;

(c) the suit for possession filed after 20 years was barred by time and B had become the owner of the property by prescription;

(B) Alternatively, B pleads that he was inducted into the property as a tenant and his tenancy was protected under the provisions of the Delhi Rent Control Act, 1958 and thus the civil court did not have the jurisdiction to entertain a suit for recovery of possession of immovable property form a protected tenant.

Decide, whether the suit claim is within time and whether B is to be permitted to lead evidence on both the pleas taken in his written statement. (20 Marks)

The jurisdiction of the court at Mumbai is invoked pleading that a relative of A, who was a resident of Mumbai, on his visit to Delhi on 15th January 2017 came across the said poster and after returning to Mumbai and telephonically inquired from A on 25th January 2107 about the contents of the same and further pleading that the cause of action accrued to A at Mumbai.

B in his written statement objects to the territorial jurisdiction of the court at Mumbai and pleads that the jurisdiction of Mumbai Court has been invoked mala fide to harass him specially when both A and B were residents of Delhi and allegedly defamatory publication was also made at Delhi.

A does not file any replication.

One of the issues framed in the suit is on the aspect of territorial jurisdiction. The Mumbai Court through finds B to have defamed A and A entitled to compensation therefore, however, dismisses the suit Vide judgement dated 1st November 2018 holding that the court at Mumbai did not have territorial jurisdiction to entertain the suit. Therefore on 7th January 2019 files a suit for the same relief in the court in Delhi. Decide whether the suit at Delhi is within limitation. (20 Marks)

A defendant in an ordinary suit for recovery of money is on the 1st August 2018 served with summons of the suit for 27th September 2018 which is declared a public holiday and all cases of which date were by a general notification adjourned for 2nd November 2018.

ABC Pvt. Limited, a company, institutes a suit for permanent injunction against D claiming that D had taken up employment with the said company about one year back and had agreed to serve the company for a minimum period of three years and had further agreed to during the said period of three years not take up employment with anyone else; however, D had submitted resignation to the company and was about to join a computer of the company.