A detailed study regarding the Deterrent Effect of Capital Punishment This article titled ‘A detailed study regarding the Deterrent Effect of Capital Punishment.’ is written by Thomas Sebastian and Thomas P B and discusses the deterrent effects of capital punishment.

The researchers also extend the study regarding the criteria used by the court to identify the rarest of the rare cases and also the aftereffect of implementing Capital Punishment in India.

India follows the Reformative theory of punishment. According to this theory, Crime is considered a disease that can be cured with the help of the reformation process. However, India uses Capital punishment as an exception to this rule. After Independence, more than 57 people had been executed according to official government statistics of India. Capital punishment is used in India in the rarest of rare cases by believing that it deters people from committing crimes and reduces the violent crime rate of the country.

Moreover, almost 28 countries have never executed anyone in at least 10 years. 52 countries retain the death penalty by speculating that the death penalty can deter people from committing crimes and also it can reduce the violent crime rate in the country.

Nevertheless, a recent study by Michael Radelet and Traci Lacock of the University of Colorado, found that 88℅ of the nation’s leading criminologists do not believe that, the death penalty is an effective crime deterrent. “Does execution lower the homicide rate? The view of leading criminologists” published in the journal of criminal law and criminology had come to a similar conclusion. Moreover, India’s Law Commission in its 262nd report expressed that the concept of the death penalty should be abolished for all crimes except the terrorism-related offence.

For the making of this paper, the researchers opted for the traditional Doctrinal research method for the completion of the paper. The author solely depended upon secondary data for collecting information on this topic. Some of the secondary sources referred to are books, articles, journals, websites, and so on.

III. Object of the study

V. Limitations of the research

There are four important theories of punishment:

One of the important and widely accepted theories of punishment is the deterrent theory. The idea behind this theory of punishment is to impose the exemplary sentence on the crime doer because this sentence creates fear in the mind of the people that prevent them from wrongdoing.

Moreover, Iran and Saudi Arabia secure the second position in execution for the past 15 years. [1]But the real question here is any of these countries was able to reduce the violent crime rate in these countries by imposing drastic measures of the death penalty.

1. Violent crime rate in countries with the highest execution rate

From the data’s available from the report of Amnesty International, China, Iran, Saudi Arabia, Iraq, Egypt, Pakistan etc. are the top countries that mostly use capital punishment for crimes. Cases of Capital Punishment in China are more than 1000 each year and more than 250 in the case of Iran and 150 in the case of Saudi Arabia.

Reports have suggested that all these countries are using capital punishment for crimes that do not fall under the purview of a serious crime or heinous crime from the viewpoint of a reasonable man. Thus, these countries misuse the provisions of Capital Punishment.

Article 48 of the criminal law of the People’s Republic of China provides that, the death penalty is only applied to criminal elements who commit the most heinous crimes. But there is no precise definition of the word heinous crime in any of the laws and thus, a man who stole 14 cattle and a man who murdered 11 women were both given the death penalty.

Moreover, in China, data regarding the execution is considered state secret[3]. The death penalty in Iran also fails to meet the threshold of the most serious crime and people who have been executed in Iran for the last few years include more than 67 children and some women.[4]

2. Only reduction of non-serious crime

Fear of getting capital punishment only prevents people from committing a non-serious crime and these fears do not affect the criminals who commit heinous crimes. Because most of the violent crimes are committed by people who do not have the basic human emotions like love, guilt, empathy, etc.. that makes them human. They are capable of doing the crimes in the most inhumane way and fear of getting the death penalty does not prevent them from committing that crime. So imposing the death penalty does not help in violent crimes committed by people who do not even have the basic emotions that make them more humane.

Compare the murder rate in countries with capital punishment and Countries without capital punishment, there is a higher chance of inaccuracy because, the crime rate of countries depends upon a lot of different factors like geography, population, etc.. and considering data’s available from different states of the same country, may help in the reduction of the chance of inaccuracy for an extend. 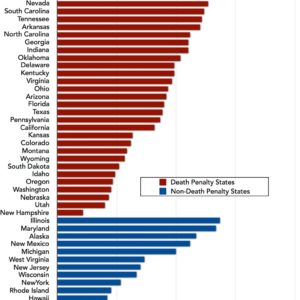 4. The murder rate in countries before and after the abolition of Capital Punishment

So from this data, we can understand that the existence of the death penalty does not help in the reduction of any violent crime and states with capital punishment has increased violent crime rate.

According to the report of Abdorrahman Boroumand Center, a Washington DC-based organization that promotes human rights and democracy in Iran, Nations that abolished the death penalty tend to see their murder rates decline.

Countries were included if they met some criteria.

(murder rate data was available from the World Trade Organization.) 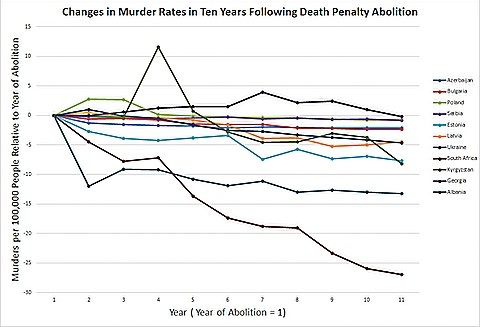 The researchers analyzed the murder rate in these countries each year and found out that six of the abrogated countries experienced murder rates below the baseline and 4 countries’ murder rates fall below baseline except for two years. Only one country Georgia encountered an upward trend in murder rate that surpasses the baseline.The countries that met the study’s criteria were Azerbaijan, Bulgaria, Poland, Serbia, Estonia, Latvia, Ukraine, South Africa, Kyrgyzstan, Georgia, and Albania.

So abrogation of the death penalty does not affect the violent crime rate in the countries and according to the report, ten counties out of eleven countries show a fall of murder rates below the baseline.

VII. Rarest of the rare case and Death Penalty in India

However, in Machhi Singh v. State of Punjab,[7]the court laid down certain criteria for identifying the cases that fall under the purview of rarest of the rare cases.

According to the judgment of the Court, in this case, a case becomes rarest of rare, when the crime is committed in a very brutal, ridiculous, and revolting manner, and the motive of the crime doer is cruelty, this case may consider as a rarest of the rare case. But along with these two conditions, the crime must be abhorrent, and the proportion of the crime should be massive.

If the victim of murder is an innocent child or a woman or a public figure, the chances of considering it as rarest of rare case are very high. Even though before opting death penalty, the circumstance and situation of the culprit also consider.[8]

The doctrine of rarest of the rare case is very relevant because it prevents taking away the life of people and misuse of the death penalty. Moreover, it gives the highest punishment to people who commit heinous crimes.

Even though taking away the life of a person who committed a heinous crime may bring an illusion of justice in the minds of people and prevents the criminal from repeating the crime, the death penalty is always irreversible and there is a higher chance of hanging innocent. So, it is better to use the death penalty in an exceptional situation or rarest of rare case.

Execution Around The World, 11:07, Available Here.