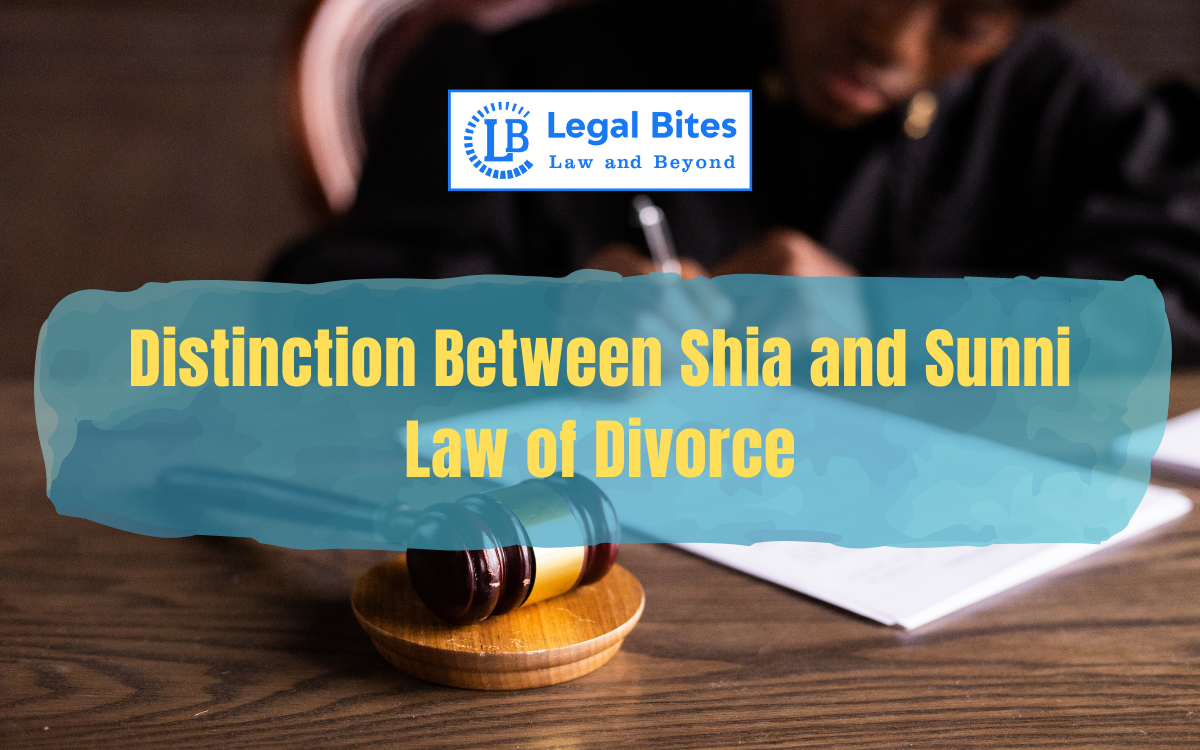 The present article, “Muslim Laws: Distinction Between Shia And Sunni Law Of Divorce” will explore the distinction between Shia and Sunni laws of divorce, referring to personal law or statutes, and relevant case-law where applicable.

While Muslim personal law is often thought of as a monolith in terms of the customs, usages and practices related to marriage and divorce, there are in reality various schools of Islamic law that have distinct practices. These schools are often based on different religious sects. The Sunni and Shia sects have their own respective customs and usages relating to marriage and divorce under personal law. The practices of these two sects may overlap or differ.

To whom do Muslim law practices such as talaq, apply in India?

The personal law of the Muslim community in India is governed by customary law.[1] However, there are some secular legislations that consolidate and clarify the extent of the application of laws upon members of the Muslim community.  Section 2 of the Muslim Personal Law (Shariat) Application Act, 1937 (‘the Shariat Act, 1937’) which deals with the application of personal law to Muslims, states that notwithstanding any contrary customs or usages, in all of the below-mentioned areas, (apart from agricultural land-related questions), the rule of decision in cases where the parties are Muslims shall be the Muslim Personal Law (Shariat).[2]

Thus, it is clear that where questions of succession, property and marriage rights are concerned, it is the Shariat that governs marriage and dissolution of marriage (that is divorce in its various modes such as talaq, ila, zihar, lian, khula and mubaraat.), and not any other secular legislation or law.

What are the Sunni and Shia sects of Muslim law?

The Sunni and Shia (also written as Shi’a) sects or communities are distinct subgroups of Muslims, set apart due to some fundamental ideological differences.[4] The two groups share several beliefs and practices regarding the Islamic faith.

These include the acceptance of the Quran as the primary religious text; reliance on the Hadith, although the groups favour different collections of sayings; and the Five Pillars of Islam.[5] However, the primary ideological differences relate to the authority of religious leaders and the leadership favoured by the Muslim community following the death of the Prophet.[6] Thus, those Muslims who followed Abu Bakr (the closest companion of the Prophet) were known as the Sunni (the origin of the name ‘Sunni’ is derived from the term ‘Sunnah’ implying those that follow the example of the Prophet.[7]

On the other hand, those Muslims that followed Ali,  the cousin to the Prophet, were known as Shia or Shi’a (the origin of the name ‘Shia’ comes from the ‘Shi’atu Ali’ or the followers of the Party of Ali). The present article will discuss the meaning and essentials of talaq in the following section while highlighting the differences between customary laws practiced by the Shia and Sunni communities in India.

Divorce as a concept

Before discussing the law of divorce, it is pertinent to briefly touch on the concept of marriage in Muslim personal law. As opposed to the concept of marriage being a sacrament in Hindu personal law,[8] in Shariat, the marriage or nikah, is a legal contract between a bride and bridegroom as part of an Islamic marriage.[9] Thus, marriage in Islamic traditions is the basis of a contract, and not a sacrament, as is the case in Hindu personal law. This is a position that has been observed by the Karnataka High Court in the 2011 case.[10]

The practice of the husband exercising his right to pronounce divorce is known as talaq and generally refers to the dissolution of marriage by the husband using appropriate words.[11] The method of affecting the repudiation of marriage must be performed with the procedure as laid down by Shariat. The power of a Muslim husband to divorce his wife is absolute and can be done without providing reasons and without recourse to the judicial system.[12]

This absolute power of the Muslim husband to divorce his wife is a theme that remains consistent across Shia and Sunni laws of divorce. Thus, when the question arises as to how the differences between the Sunni and Shia sects show up in their laws of divorce, it has been observed by commentators that:

“…the most remarkable feature of Muslim law of talaq is that all the schools of the Sunnis and the Shias recognize it differing only in some details.”[13]

All that is necessary is that the husband should pronounce talaq; how he does it, when he does it, or in what he does it is not very essential.[14]

Among the Sunnis, talaq may be express, implied, contingent constructive or even delegated. The Shias recognize only the express and the delegated forms of talaq.

According to Sunni law, marriage may be classified into three categories:

Under Shia law, irregular marriage is not recognised. It is classified into three categories:

While the applicability of law does not constitute a specific difference in application of the laws of divorce, it is an important distinct worth highlighting when comparing the Shia and Sunni traditions of marriage and divorce. Now, the general rule for a valid Muslim marriage is that both parties must be Muslims. However, in the case of Shias, they are free to marry a Jew, Parsi, Christian (also known as Kitabia religion due to the fact that such a religion centres a divine book within the framework of its theology) in a Muta form of marriage.[15]

When clear and unequivocal words, such as “I have divorced thee” are uttered, the divorce is express. Thus, the express talaq, may be divided into two categories:

It has two forms:

As of 2019, triple talaq has also been criminalised in Indian and any such talaq affected by a Muslim husband is deemed void per the Muslim Women (Protection Of Rights On Marriage),Act, 2019.

Conditions for a valid talaq

In the case of Shia law (and some smaller Sunni schools), a talaq if pronounced under compulsion, coercion, undue influence, fraud, or voluntary intoxication is considered void and ineffective. Thus, if a Muslim husband in India utters the appropriate words for dissolving marriage against his Muslim wife, while intoxicated of his own volition, such a talaq would be deemed invalid and would not dissolve the marriage as under the Shia tradition.[25]

It must be remembered that in certain schools such as the Shia school, where such invalidating conditions exist, the rationale for this is due to the emphasis on the parties having to freely consent for their divorce. This emphasis is a result of nikah in Muslims being of contractual in nature, and therefore the concept of consent in a contract is believed to be a pre-requisite of any valid talaq. Thus, it must be ensured that divorce is not vitiated by coercion, undue- influence, misrepresentation, fraud, etc.[26]

“The word talak in its different grammatical forms is regarded as express by other expressions which may be construed as meaning repudiation of the marriage by the husband, but are also capable of other meanings, are regarded as allusive. When express words are used no question can arise as to what was meant, but allusive words require construction.”

The appellate court, in this case, the Allahabad High Court, finally held that this pronouncement amounted to divorce- although the court dismissed the fact that the Muslim husband’s pronouncement that the wife would be his paternal uncle’s daughter if she left the house to go to her father’s house, was not evidence of a prohibited relationship because a paternal uncle’s daughter was not within the prohibited relationship as under Muslim law. Moreover, in the case of a contingent talak is that is pronounced conditionally, relying on an impossible event, the talaq will be valid if and only if the event happens.[35]

The present article has discussed the distinctions in the law of divorce between the Shia and Sunni sects in Muslim personal law in India. To conclude, it is believed that Sunni law permits a more liberal expression of divorce while Shia law encourages a more conservative expression of divorce. Thus, there is more emphasis on procedural requirements such as presence of witness and use of specific formats in case of the Shia school than the Shia school, which has less procedural requirements for a valid divorce.

[5] The Five Pillars of Islam include: Shahada, the declaration that “There is no God but God, and Muhammad is His messenger.”; Salah, prayer; Zakat, charitable giving; Sawm, fasting in the month of Ramadan; Hajj, pilgrimage to Mecca.

[21] This is because a majority of Muslims in India are followers of the Hanafi traditions and customs. See: Carroll, Lucy. “Muslim Family Law In South Asia: The Right To Avoid An Arranged Marriage Contracted During Minority.” Journal of the Indian Law Institute, vol. 23, no. 2, Indian Law Institute, 1981, pp. 149–80,  Available Here

[31] For instance, when a husband says to his wife, “I give up all relations and would have no connection of any sort with you: or, I have released thee from being my wife”, as cited in Dr. P. Diwan, Muslim Law in Modern India, 13th ed., 2018.