The Doctrine of Harmonious Construction: The Parliament makes a separate set of statutes, rules and legislation as well as constitutional provisions under their well-defined powers. While the framing of these provisions has to be done very carefully, conflict still occurs sometimes due to overlapping in their enforcement. This is because there are chances of certain gaps being left… Read More » 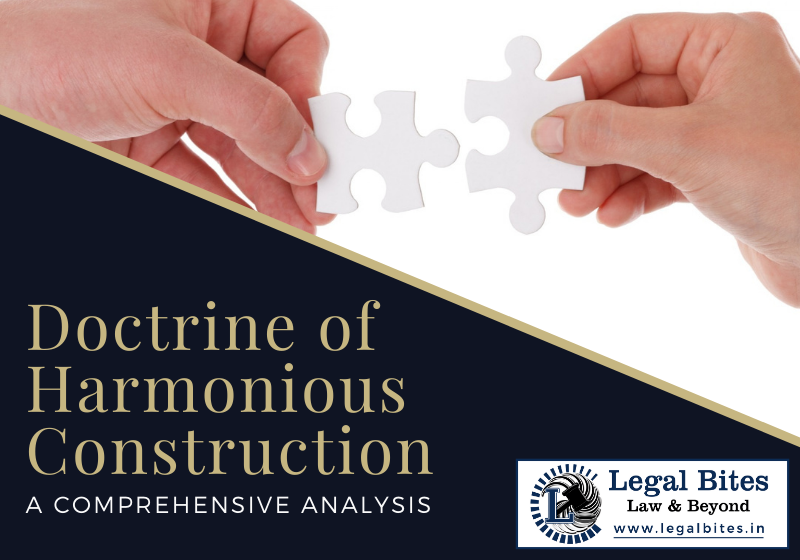 The Doctrine of Harmonious Construction: The Parliament makes a separate set of statutes, rules and legislation as well as constitutional provisions under their well-defined powers. While the framing of these provisions has to be done very carefully, conflict still occurs sometimes due to overlapping in their enforcement. This is because there are chances of certain gaps being left while framing of these provisions, which could not have been foreseen by legislators. To deal with such...

The Doctrine of Harmonious Construction: The Parliament makes a separate set of statutes, rules and legislation as well as constitutional provisions under their well-defined powers. While the framing of these provisions has to be done very carefully, conflict still occurs sometimes due to overlapping in their enforcement. This is because there are chances of certain gaps being left while framing of these provisions, which could not have been foreseen by legislators. To deal with such conflicts, certain doctrines and rules are propounded by courts that are used in the interpretation of statutes. One such rule of interpretation is the Doctrine of Harmonious Construction.

This article provides an overview of the doctrine along with case laws.

I. Meaning of the Doctrine of Harmonious Construction

The Doctrine of Harmonious Construction is considered as the thumb rule to the rule of interpretation of statutes. The doctrine states:

“Whenever there is a case of conflict between two or more statutes or between two or more parts or provisions of a statute, then the statute has to be interpreted upon harmonious construction. It signifies that in case of inconsistencies, proper harmonization is to be done between the conflicting parts so that one part does not defeat the purpose of another.”

The doctrine is based on a cardinal principle in law that every statute has been formulated with a specific purpose and intention and thereby should be read as a whole. The normal presumption is that what Parliament has given by one hand is not sought to be taken away from another. The essence is to give effect to both the provision. To avoid conflict, the adopted interpretation of the statute should be consistent with all its provisions.

If there seems an impossibility to harmoniously construe or reconcile the parts/provisions, then the matter rests with the judiciary to decide and give final judgment. The aim of the courts is to do interpretation in a manner that it resolves the repugnancy or inconsistency between the provisions and enables the statute to become consistent as a whole and read accordingly.

II. Origin of the Doctrine

The Doctrine of Harmonious construction was originated through interpretations given by courts in a number of cases. The evolution of the doctrine can be traced back to the very first amendment made in the Constitution of India with the landmark judgment of Shankari Prasad v. Union of India [1]. The case dealt upon the conflict between part III (Fundamental Rights) and IV (Directive Principles of State Policy) that form as basic features of the Indian Constitution.

The court applied the rule of Harmonious Construction and held that Fundamental rights being rights given against the state can be taken away in certain situations and can be amended as well by the Parliament to bring them in conformity with constitutional provisions. Preference was given to both and it was decided that FRs and DPSPs are just two different sides of the same coin that requires working together for the public good.

Historically, this doctrine was evolved through the rule of conciliation first propounded in the case of C.P and Berar Act [2]. The court applied this rule of interpretation to avoid overlapping or inconsistency between entry 24 and entry 25 of State list and read them harmoniously by determining the extent of the concerned subjects.

III. Applicability of the Doctrine

To quote courts view on the application of the doctrine of harmonious construction:

“When there are in an enactment two provisions which cannot be reconciled with each other, they should be so interpreted that; if possible, the effect should be given to both.” [3]

It is a well-settled principle that a statute must be read as a whole and in a manner that one part/provision of the act is harmoniously construed in reference to the other provisions of the same Act so as to provide a consistent enactment of the whole statute. [4]

There are five principles of this Doctrine as laid down by the apex court of India in the case of CIT v. Hindustan Bulk Carrier:

The aforesaid principles give the basic yet clear explanations on the usage of the rule of Harmonious Construction while interpreting parts of any statute.

Moreover, when two provisions of a statute are in apparent conflict with each other, then both must be interpreted in a way that it gives effect to both and no such construction should be adopted that renders either of the provisions useless or inoperative except in the last resort. The Supreme Court has clearly illustrated the use of this principle in Raj Krushna v. Binod Kanungo [6] case.

To have a fair understanding of the concept of this interpretation rule, it is important that we read upon its actual applicability in relevant case laws.

The first is the landmark judgment in the history of the Indian Constitution, M.S.M Sharma v. Krishna Sinha. The Petitioner in the case was alleged with that he has breached the privileges of the speaker for publishing a speech which was delivered by the member. A show-cause notice was issued to the Petitioner for why action should not be taken against him.

Petitioner’s Contention: The action taken by the Committee and the notice sent stands in violation of his fundamental rights under Art 19 (1)(a) and Art. 21. However, since the respondent relied on the Art. 194(3), the rule of interpretation was involved as to which provision shall prevail.

Held: The Supreme Court applied the rule of harmonious construction and held that though Art. 194 (3) is subordinate to Art. 21 but Indian Constitution is the supreme law in the country and therefore, a person can be expunged from publishing the official records of the Assembly. This is not a complete prohibition on FR of that person.

Further, in the case of M. Nanavati vs. State of Bombay [9], the matter was related to the power conferred to the Governor under Art 161 and the court has to interpret the scope of Art 161 and Art 142 (1) of the constitution. In the present case, Bombay HC passed sentence against the accused. The petitioner then approached the Governor who passed a suspension order against the sentence of Bombay HC.

When the matter reached before Hon’ble Supreme Court, the court applied the rule of Harmonious Construction and held that the absolute power of granting suspension to the Governor under Art 161 becomes absolved when the matter becomes sub judice. In such situations, there is a complete scope of interference with the judicial power of the court under Art 142.

Recently in the case of Department of Customs vs Sharad Gandhi [10], the Hon’ble Supreme Court has again applied the principle of Harmonious construction to resolve the inconsistency between the Antiquities and Art Treasures Act, 1972 and Customs Act, 1962. The Bench observed the “inconsistency” found in Article 254 of Indian Constitution between laws made by Parliament and state legislatures stating: If the law made by the state is repugnant to the law made by the parliament, then law made by the parliament shall prevail to the extent of repugnance [11]. However, in the present case, the court observed that both the said act have been made by Parliament.

It is clear that there is always a possibility of ambiguity or gaps in the laws made by the legislature. To fill those gaps, Harmonious construction as a rule of interpretation of statutes plays a huge role in giving maximum effect to the statutory provisions. Today, considered as a chief tool in hands of our Judiciary, the rule helps two confronting laws work together harmoniously in delivering justice to society at large.