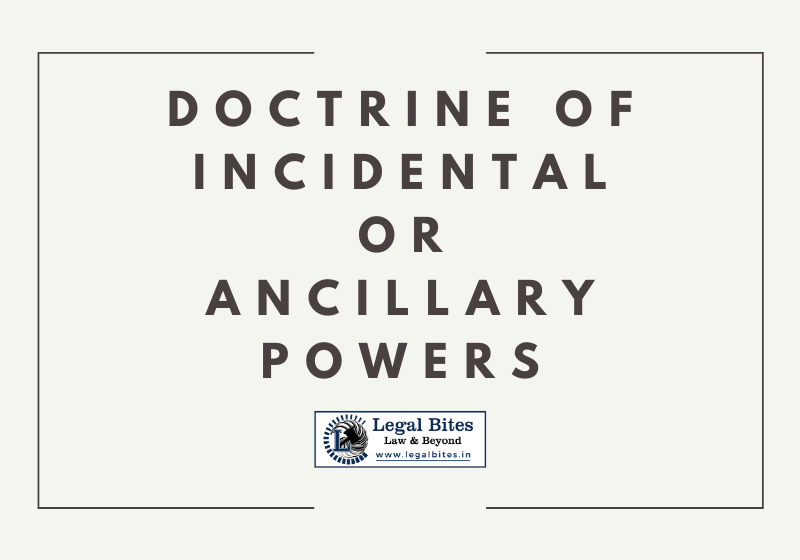 The Doctrine of Incidental or Ancillary Powers: The principle of this doctrine has developed as an addition to the Doctrine of Pith and Substance. The Doctrine of Incidental and Ancillary Powers enables the Indian Judiciary to resolve any conflicts related to the competence of legislative powers given to the Union and State Government. This doctrine is invoked when there is a need to aid the principal legislation in question. Let’s dive in further to understand the meaning, scope...

Let’s dive in further to understand the meaning, scope and applicability of this doctrine.

I. Meaning of the Doctrine of Incidental or Ancillary Powers

A doctrine is a principle, theory, or position that is usually applied and upheld by courts of law. In Indian Constitutional law also, there are different judicial doctrines that develop over time as per the interpretation given by the judiciary.

Unfolding the meaning of the Doctrine of Incidental or Ancillary powers, it refers to the power given to the legislature to legislate on a particular subject which will also include the power to legislate even on the ancillary matters that are reasonably connected to the concerned subject.

The Apex Court of India in the case of State of Rajasthan v. G Chawla stated:

The powers conferred to the Central and State governments under the three lists of the Seventh Schedule are expressly mentioned but the Constitution gives flexibility to the governments to even legislate on any related incidental or ancillary matter. Then in a true manner, it would be called as a proper exercise of the expressly conferred legislative powers.

II. Historical Background of the Doctrine

The evolution of the Doctrine of Incidental or Ancillary Powers in the Common Law system can be traced back to the landmark case of R. v. Waterfield [2]. In the case, the appellants were convicted for rash driving and assault on police officers.

The facts suggest that police constables approached the appellants who were driving rashly to gather evidence, to which the appellants drove the car at the police constables. The issue before the court was whether the act of police officers was prima facie an unlawful interference with a person’s liberty or property under the Person Act, 1861. The court laid down the Waterfield or Ancillary powers test to apply in this case:

The court held that although the constables had the duty of bringing offenders to justice, this right became limited to the extent of interfering with the person or property.

The Waterfield test from here found its way into the Canadian law and then later, the Indian Constitution also adopted it. The Indian Judiciary started to use this test as an interpretation to ascertain the power and scope of legislatures. The first case to apply this test was United Provinces v. Atiqua Begum [4]. This case laid the foundation stone for the Doctrine of Incidental and Ancillary powers in India clarifying the stand that to fulfil the objective of the law, it is essential that a legislature legislates even on matters which are incidental or ancillary to the principal matters of legislation.

Though there is no specific provision in the Indian constitution that expressly entails the power of legislatures to legislate on ancillary matters but there are various articles in the Constitution that reflects this power to be invoked in provided circumstances. Some of the provisions are as follow:

“Such supplemental, incidental and consequential provisions (including provisions as to fees) as Parliament may deem necessary for the effective functioning of, and for the speedy disposal of cases by, and the enforcement of the orders of, such tribunals.” [6]

It is noteworthy that the Doctrine extends the scope of the power of the government to legislate. One such example is the case of R.D Joshi vs. Ajit Mills [8] in which the court discussed the question on power of the State legislature to make an enactment that allowed the state to forfeit the sum collected by dealers under the name of sales tax.

It was held that the measure taken by the state was punitive and necessary for effective enforcement of social legislation. Further, the court stated that the entries under the list must be given a broad meaning to include the incidental and ancillary powers as well.

However, it is to remember that no power given under the Indian Constitution is absolute and it is subject to change as required. Similarly, the power of legislatures to make laws on incidental matters is also limited to a reasonable extent.

As already mentioned above, the limitation is that the legislature has not to legislate on those matters that are explicitly specified in the list. To prevent such misuse of legislative powers under the garb of judicial doctrines, the Hon’ble Supreme Court has always cautioned against any extended and unreasonable construction.

In the case of R.M.D.C Mysore Pvt. Ltd. vs. State of Mysore [9], the Supreme Court has clearly stated that the power of state government to make laws related to betting and gambling of Entry 32, it won’t include the power to impose taxes on the concerned subject matter as this is already subject of Entry no. 62 in the State List.

Moreover, J. Gajendragadkar in the landmark case of Raja Jagannath Baksh Singh vs State of Uttar Pradesh [10], the court observed that:

“[…] it is necessary to bear in mind that we are interpreting the words used in the Constitution and it is an elementary cardinal rule of interpretation that the words used in the Constitution which confer legislative power must receive the most liberal construction and if they are words of wide amplitude, they must be interpreted to give effect to that amplitude[…] A general word used in an entry like the present one must be construed to extend to all ancillary or subsidiary matters which can fairly and reasonably be held to be included in it.” [11]

The dynamism of the Indian constitution evidently reflects through the judicial doctrines and the Doctrine of Incidental or Ancillary Powers is one such gem adopted by the courts. When an express power is conferred to the legislature, there should be proper exercise and enforcement of it and Incidental and Ancillary powers just adds value to these necessary powers. It safeguards the powers of the government and equips them to enforce it with effective functioning.