Doctrine of Judicial Precedent in Indian and International Jurisprudence

Read the article titled Doctrine of Judicial Precedent in Indian and International Jurisprudence written by Jagrati Gupta only on Legal Bites. Doctrine of Judicial Precedent Human civilization will turn chaotic and anarchical if there is no system of laws or regulations. That’s why from time immemorial some form of rules or regulations have been practiced in order to… Read More » 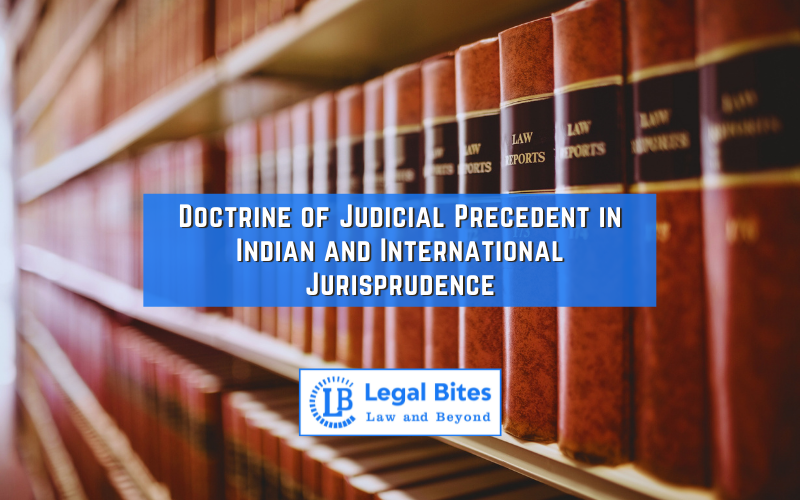 Read the article titled Doctrine of Judicial Precedent in Indian and International Jurisprudence written by Jagrati Gupta only on Legal Bites.

Human civilization will turn chaotic and anarchical if there is no system of laws or regulations. That’s why from time immemorial some form of rules or regulations have been practiced in order to regulate and restrain human tendencies. According to Merriam Webster, the definition of ‘law’ is any binding custom or practice of community that is a rule of conduct or action prescribed or formally recognized as enforced by a controlling authority.

This rule of conduct not only prevents chaos but also safeguards the rights of people. But if a person exercises his rights by contravening or infringing another person’s rights, this type of insecurity occurs in day-to-day human contact and is inevitable. This level of insecurity is eradicated through the law which is placed under three organs: the legislature which formulates laws, the executive which executes them, and the judiciary which decides the matters of laws’ infringement.

Thus, judicial precedent can be defined as any legal pronouncement or judgement given which has been taken as an example of a rule to be followed in future similar cases. In a nutshell, it can be understood that judicial precedents are followed to avoid different verdicts on similar facts of the case as if there are different verdicts, confusion will arise in public and the defeating parties in all the cases will believe that injustice is done to them which could lead to rebellion and disbelief in the whole legal system.

Stare Decisis means “let the decision stand in its rightful place”. This maxim is used in connection with judicial precedents and binds the judge to follow the earlier rulings or decisions of courts as a legal principle in cases with similar facts and circumstances. The Latin doctrine Stare decisis et non quieta movere literally means to abide by the earlier rulings and not to dishevel the already established principles to avoid chaos. The system of judicial precedents is mostly followed by the lower court, established by the superior courts.[2]

Employment of Stare Decisis in India

In Vishaka v. State of Rajasthan[6], the Supreme Court established relevant guidelines and rules to prevent sexual harassment of women at workplaces which should be strictly abided in accordance with Article 141 of the Constitution.

Lakhani v. Malkapur Municipality[9], the court held that the decision of the Supreme court is binding on all High Courts.

There have been innumerable judgements where the principle of stare decisis was not abided by as with time new developments had taken place and the conditions were different which persuaded the courts to take a different view in cases of similar facts.

The doctrine of prospective overruling whose genesis was in the American law which meant to overturn or alter the decisions which had been set as precedent when it is discovered by the courts that earlier decisions were not effective and, in some cases, outrightly wrong and the court acknowledges that the following of the same precedent would be against the public interest.

In Sambhu Nath Sarkar v. State of West Bengal[10], the Constitution bench of seven judges rejected the principle of stare decisis to be followed as the earlier decision in the AK Gopalan case was held to be “inconsistent with the legal philosophy of our Constitution” and it would harm the public interest to continue the mistake in future cases.

In Distributors (Baroda) Pvt Ltd v. Union of India[11], in this case, also the court overrode the earlier decisions and held them to be invalid and are to be reconsidered, thus, the court is not compelled to follow the wrong path.

In Golaknath v. State of Punjab[12], the CJI Subba Rao had invoked the doctrine of prospective overruling and held that the court owes a duty to announce new and better rules for future problems when it acknowledges that the principle established by previous rulings are inconsistent and it would rather be wrong to continue them for the sake of maintaining the authority of precedents. So, the earlier judgements in which the legislature under Article 368 of the Constitution was empowered to amend all the parts of the Constitution including Part III was overturned and with this, the Parliament was not allowed to bring any law which curtailed Fundamental Rights.

In Kesavananda Bharti v. State of Kerala[13], in this case, the Supreme Court overturned the decision held in Re- Berubari case and held that Preamble is the part of the Constitution.

In Girtha Hariharan v. RBI[14], in order to protect Section 6(a) of the Hindu Minority and Guardianship Act, 1956 from being declared unconstitutional, the court interpreted it in a different way from the earlier judgements and hence invoked the doctrine of prospective overruling.

In the Mandal Commission Case[15], the court overruled its judgement in the General Manager, Southern Railway v. Rangachari decided in 1962.

The idea of trying similar cases on the same principles set by the earlier judgements holds an imperative position in many common law systems. Some of the countries in which the judicial precedents are followed as a source of law are:

Federal courts in matters of state law are bound to follow its precedents and vice-versa. An instance, where judicial precedents were followed, is in Casey v. Planned Parenthood[26] where the precedent of acknowledging a woman’s constitutional right to abortion set in Roe v. Wade[27] was abided by. In Payne v. Tennessee[28], the Court overturned two precedents—Booth v. Maryland[29] and South Carolina v. Gathers[30]—to hold that the Eighth Amendment did not prohibit a capital sentencing jury from considering victim impact evidence.[31]

The value of judicial precedents is magnificently significant, and lays a path and is a source of enlightenment in future similar problems. It is a source of knowledge and solution to academicians, researchers and law students due to its clarity in thought and arrangement. Thus, the principles and rules established in the earlier judgements are bound to be followed in similar future cases as it not only prevents chaos and confusion but also enhances confidence in judicial institutions that it will provide justice.

But there are many instances where the limitation to only follow the precedents has constrained judicial activism. That’s why in some landmark judgements, the courts have refused to follow them due to the inherent wrong nature of the precedents or the obsolete principle it propagated, and therefore new rules and interpretations were done and passed on.

[4] Sparsh Agrawal, Scope and Application of doctrine of precedents under Article 141 of the Constitution, Ipleaders, August 17, 2020, (Online) Available from: Click Here (Accessed January 19, 2022).

Jagrati is a Law student at Banaras Hindu University, Varanasi.