What led to the enactment of Insolvency and Bankruptcy Code, 2016?

Introduction The Insolvency and Bankruptcy Code (IBC), 2016 has been enacted to merge the existing laws related to insolvency and bankruptcy. Insolvency is a state in which financial difficulties of a company are such it is unable to run its business at its current pace. Bankruptcy is the status of a person who is legally declared as incapable… Read More » 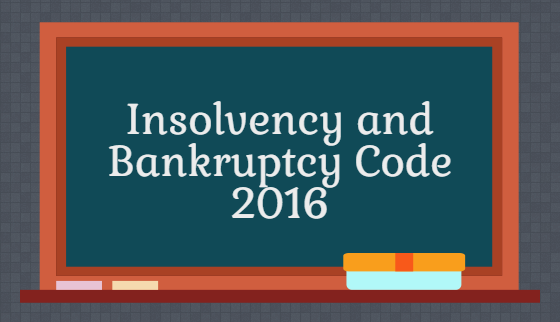 The Insolvency and Bankruptcy Code (IBC), 2016 has been enacted to merge the existing laws related to insolvency and bankruptcy. Insolvency is a state in which financial difficulties of a company are such it is unable to run its business at its current pace. Bankruptcy is the status of a person who is legally declared as incapable of paying their dues and obligations The Code aims to smoothen the process and to make it clear and certain. The IBC involves standard steps which is viable and understandable. So, everyone, be it creditors, debtors, companies, or shareholders etc. shall have a standard perform for any matters relating to insolvency.

Initially there was Presidency Towns Insolvency Acts, 1909 which was applicable in Kolkata, Chennai and Mumbai and the Provincial Insolvency Act 1920 for the rest of India, for regulating the insolvency laws. The Act applied to individuals and partnerships but exempted corporations from within its ambit.

After the Independence, bankruptcy and insolvency were specified in Entry 9 of the Concurrent List of the Seventh Schedule, under Article 246 of the Constitution. So, now in the present, we had numerous Acts to govern Insolvency and bankruptcy issues and matters such as the Sick Industrial Companies (special provision) Act, 1985 (“SICA”), SARFAESI Act, 2002, the Recovery of Debts due to Banks and financial institutions Act, 1993 (“RDDBFI Act”), Companies Act, 1956 as well as Companies act, 2013. But these regulations have not yielded satisfactory results. These regimes are high fragmented, borne out of multiple judicial forums resulting in lack of clarity and certainty of jurisdiction. Further, we had various adjudicatory bodies/Tribunals to deal with such issues and matters under different Acts stated above.

So, this led to the unclear knowledge about the authority as to whom the parties should approach in the related matters. Hence, this resulted in overlapping of decisions. There was no common regulatory authority to regulate the rights of the secured or unsecured creditors, employees etc. or to determine the priority of their claims. Large number of stressed assets such as NPAs with low recovery rates due to a lack of enabling environment for the enforcement of creditor’s rights. Moreover there was no adequate or credible data regarding the assets, indebtedness etc. of companies which further heighten the problems. Hence large number of legislations and non-statutory guidelines have made the recovery of debt a complex and time consuming process.

In Oswal Foods Limited case[1], situation arose where the debtor company had made two references to the BIFR, while a creditor filed a winding up petition in the High Court. Hence leading to multiplicity of cases under different Acts in the same case. Further in Jeevan Diesels and Electricals v. HSBC[2], the Calcutta High Court had to consider whether a creditor could file a winding up petition in the High Court while another creditor had initiated enforcement action in the DRT under the RDDBFI Act. So, for the same matter, proceedings were going on in different Tribunals and courts and by different parties. This is because of lack of clarity and uniform act.

So, the problems stated above are actual reasons for the enactment of IBC, 2016.

Today we have IBC, 2016, which provides a specialized forum to oversee all liquidation and insolvency proceedings for individuals, SMEs and Corporates. The Code triggers a uniform law or process for a valid claim. The Code has replaced all the existing laws and come up with a uniform procedure to resolve insolvency and bankruptcy disputes. Now, in case of any dispute, an insolvency professional will be appointed to take control of the corporate debtor. The whole process or proceedings get resolved within a standard time limit. In the case of a default, the time- limit is 180 days, within which the resolution has to be completed. This can be extended by another 90 days by the adjudicator, depending on the process. The Code provides a balanced approach between rehabilitation and recovery and provides for compulsory liquidation.it also provides a clearly –defined waterfall mechanism for payment of debt in the event of liquidation.

To meet the objectives of timeliness and value maximization, the IBC proposes a new institutional set-up comprising four critical pillars:

Steps are currently underway to set up this institutional infrastructure. The National Company Law Tribunal (NCLT) has been notified as the adjudicating authority for the corporate insolvency and bankruptcy cases.

Overall this legislation is a huge step for a country like India towards joining top 50 in the World Bank’s Ease of doing Business and has a potential to bring business practices in India closer to more developed and advanced markets over a long period of time.