Essentials of the Law of Torts

This article titled ‘Essentials of the Law of Torts ‘ is written by Anamika Gandhi and discusses the essentials of the law of torts. I. Introduction The Law of Torts allows the plaintiff to claim damages from the defendant for a tortious act. The term “tort”, has been derived from the Latin word tortum which means “twisted” or “crooked”.… Read More » 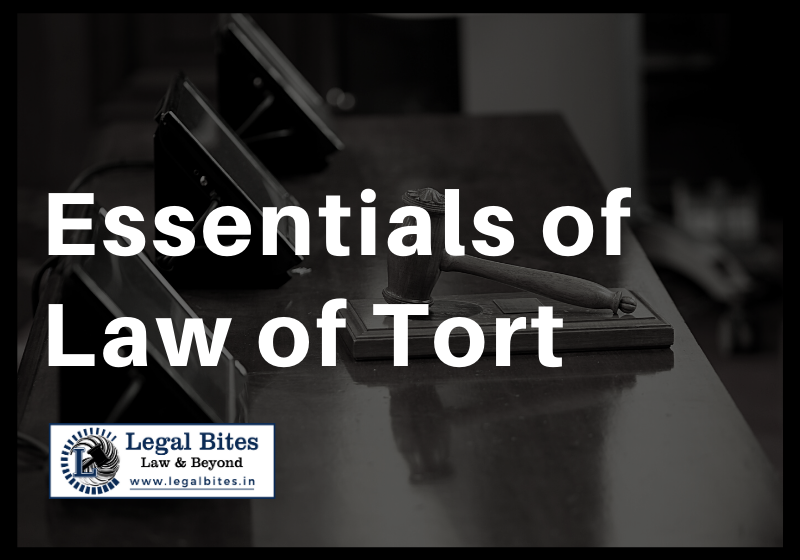 This article titled ‘Essentials of the Law of Torts ‘ is written by Anamika Gandhi and discusses the essentials of the law of torts. I. Introduction The Law of Torts allows the plaintiff to claim damages from the defendant for a tortious act. The term “tort”, has been derived from the Latin word tortum which means “twisted” or “crooked”. Although there has been no unanimous consensus on a specific definition of what constitutes a tort, there...

The Law of Torts allows the plaintiff to claim damages from the defendant for a tortious act. The term “tort”, has been derived from the Latin word tortum which means “twisted” or “crooked”. Although there has been no unanimous consensus on a specific definition of what constitutes a tort, there has been an agreement on the elements that must be present to constitute a tort. This article will elaborate on the elements that are essential to constitute tortious liability.

In his book, “The Law of Tort”, Professor Winfield, in his introductory chapter takes the position that “all injuries done to another person are torts unless there is some justification recognised by law”.

The following two conditions should be satisfied to constitute a tort:

As per the Law of Torts, in order to make a person liable for a tort, he must have done some act which he was not expected to do or he must have omitted to do something which he was supposed to do. This implies that the person must have engaged in doing either a positive wrongful act or made an omission which he shouldn’t have, which would have made him liable.

II. The Law of Torts does not cover every damage to be admissible for tortious liability

There may be a wrong done to a person, but, if it has not caused, what the law terms as “legal damage” to him, there is no redress available under the law of tort. Hence, the damage should result in legal damage, and not merely pecuniary damage.

Injuria means an infringement of the right of the plaintiff. Damnum means harm, loss or damage in respect of money, comfort, health or the like.

Thus, when there has been injuria or the violation of a legal right and the same is not accompanied with a damnum or harm to the plaintiff, the plaintiff can still go to the court of law.

Ashby v. White[4] is a leading case explaining the maxim injuria sine damno. In this case, the plaintiff succeeded in his action, even though the defendant’s actions did not cause any damage. The plaintiff was a qualified voter at a Parliamentary election, but the defendant- a returning officer, wrongfully refused to take the plaintiff’s vote. No loss was suffered by such refusal because the candidate for whom he wanted to vote won the election in spite of that. However, it was held that the defendant was liable because he caused damage to the legal right of the plaintiff by not taking his vote.

In Bhim Singh v. State of J&K[5], the petitioner, an MLA of the J&K assembly, was wrongfully detained by the police while he was going to attend the assembly session. He was not produced before the magistrate within the requisite period. As a consequence of this, the member was deprived of his constitutional right to attend the Assembly session. Thus, it was held that the legal right of Bhim Singh was violated here.

The reason for the same is that if the interference in the rights of another person is not unlawful or unauthorized but a necessary consequence of the exercise of his own lawful rights by the defendant, no action should lie. Thus, the test to know whether the defendant should or should not be liable is not whether the plaintiff has suffered any loss or not but the real test is whether any lawful right vested in the plaintiff, has been violated or not.

It means damage that is not coupled with an unauthorized interference with the plaintiff’s lawful right. Causing damage, however substantial, to another person is not actionable in law unless there is also a violation of the legal right of the plaintiff. This is generally so when the exercise of a legal right by one results in consequential harm to the other.

The Gloucester Grammar School case explains the point [6]. There the defendant, a schoolmaster, set up a rival school to that of the plaintiffs. Because of the competition, the plaintiffs had to reduce their fees from 40 pence to 12 pence per scholar per quarter. It was held that the plaintiffs had no remedy for the loss suffered by them.

In Mogul Steamship Co. v. McGregor, Gow and Co[7], a number of steamship companies combined together and drove the plaintiff company out of the tea-carrying trade by offering reduced freight. The House of Lords held that the plaintiff had no cause of action as the defendants had by lawful means acted to protect and extend their trade and increase their profits.

Thus, concluding the above discussion, it can be said:

“It is essential to an action in tort that the act complained of should under the circumstances be legally wrongful as regards the party complaining; that is, it must prejudicially affect him in some legal right; merely that it will, however directly, do a man harm in his interests, is not enough.”[9]

Thus, it can be derived from the above discussion that while tort addresses the harm caused by a civil wrong, it is not every wrong that the tort law will aim to compensate for. Only the wrongs which cause a legal injury to a person are governed by the law of torts.