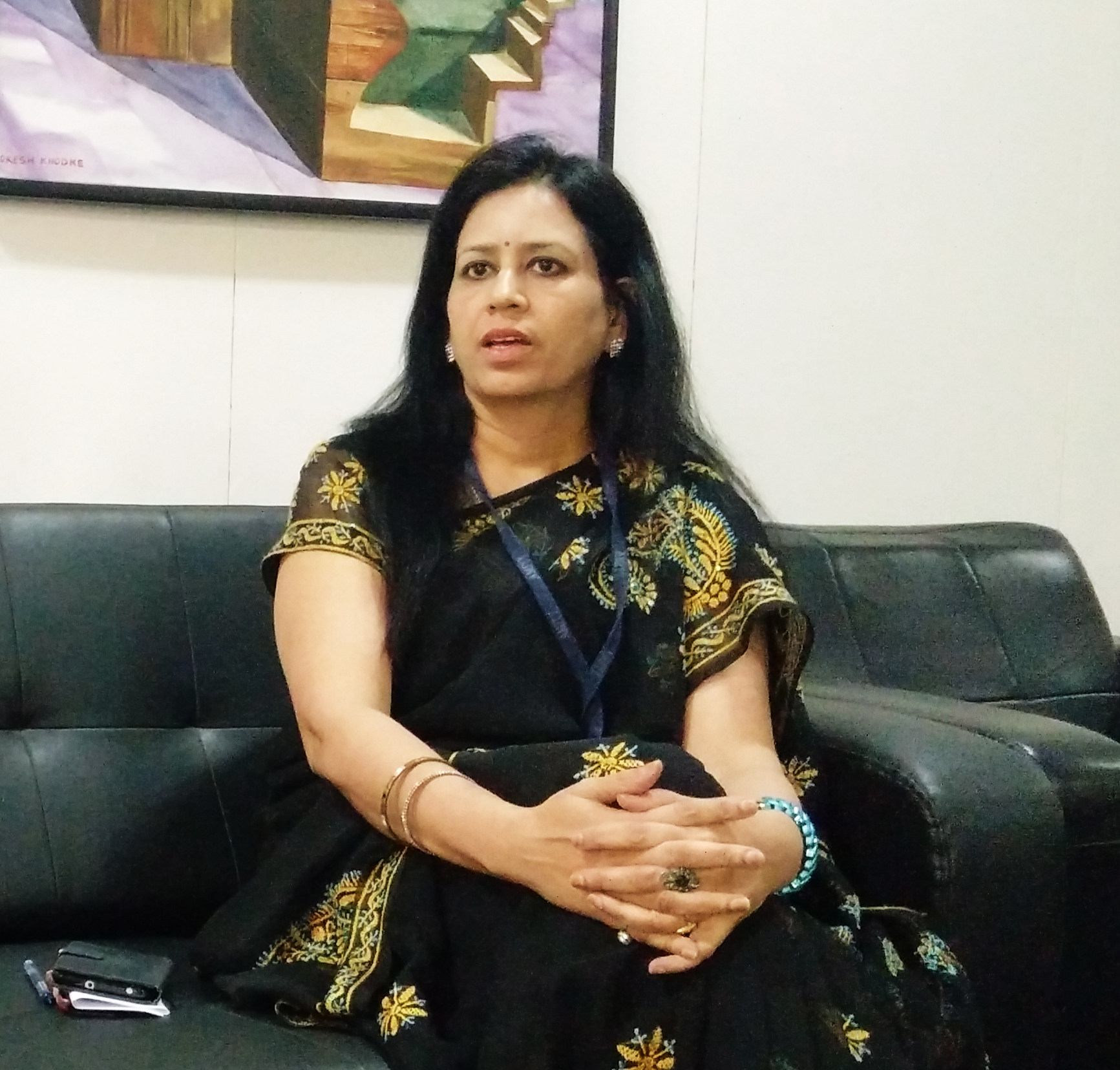 Legal Bites got an opportunity to interview Dr Shefali Raizada, Additional Director, Amity Law School, Noida. She had excelled in her University examinations; securing Gold Medal in M.A. (Western History) from Lucknow University. She also holds PGDHRM. She has done Post Graduate Diploma in International Humanitarian Laws from NALSAR. She has a number of publications to her credit and authored one book on North-East.

Here’s an excerpt of the Interview with Dr Shefali Raizada

Legal Bites: With regard to Death Penalty being awarded as a punishment for murder in the rarest of a rare case in India, what opinion do you hold in the account of Capital punishment being a grave violation of the Human Rights of the citizens of India.

Dr. Shefali Raizada: Firstly, when you talk about the Death Penalty in the Indian perspective, we can’t compare the Indian perspective to the International standard. Though the concept of Human Rights is intact and common for all, this issue of the Death Penalty cannot be treated equally to what it is at the world level in India. I think a country has to have a little freedom to make its own decisions and not comply with resolutions by Amnesty International or any other such organization which seeks absolute abolishment of Death Penalty.

India is facing the issues of terrorism and other grave offences are being committed in society. Therefore, I agree with the concept of the Death Penalty for rarest of rare cases. If we put an end to the punishment of Death Penalty, I think such grave crimes would increase to a great extent. Death Penalty is a deterrent measure used by the Indian legal system because it is a democracy. In other countries also where the model of leadership is a dictatorship or where they take a strict stand, they can always use the opportunity to utilize a resolution for abolishment. But, in a democracy, if such a resolution is accepted and followed by its true meaning, there would be chaos in terms of violations of social norms and grave crimes in society would be inevitable.

Therefore, it is wrong to compare India to other countries with reference to Death Penalty because they use other deterrent measures and India does not use other measures except the Death Penalty or Capital Punishment. To a certain extent if the Indian judicial system is adhering to the concept of the Death Penalty, then I think I shall abide by it.

Legal Bites: Time and again there is news doing rounds about students committing suicides in some part of the country or another where the primary reason behind their act of self-harm is the incapacity to meet the demands of the Indian Education System. Who is at fault? Is it the student, who can’t cope with the rat race that this competitive system has transformed us into, or is it the education system itself which needs to be redesigned to make education a fun learning experience?

Dr. Shefali Raizada: There are so many perspectives to this question, but, from my point of view, I think it starts with the family of the student because the school comes later in the life of the student. Students are committing suicides for many reasons.

Firstly, students don’t have tolerance for their emotional insecurities. They don’t have the patience or understanding to cope with a challenging situation. And the ground cause for these deficiencies is family. If the family is pressurizing the student in terms of results in their education or if there are arguments and disputes within themselves, then they are involuntarily pressurizing the student. Students don’t share their problems with their families.

Even in our days, we went through the same struggles that a student goes through nowadays with pressure from the family for better results and other things as well, but we accepted these issues as challenges and overcame them to be what we are now. These students who resort to committing suicides have been over-pampered which kills their level of tolerance to the last bit.

When a teacher complains of a student not performing well in class, they are not able to tolerate it and work for better performance. They argue unnecessarily and get very angry and lose their patience. When such traits are missing then it is very difficult to face problems and cope with the normal style of living. And the only solution to an end of their problems becomes suicide.

Students are also scared of accepting failures in life. There are so many of them who drop a year to figure out what they want to do in life and many enrol themselves in courses that they really wish to pursue. It is the duty of their parents to understand them and give them the freedom to come and talk to them about their problems.

And as far as the education system is concerned, the students now have access to so many facilities with respect to infrastructure and technology, but, the meaning of education which is to train a student and educate them is not being imparted. Educational centres are becoming much like exam conducting centres. Institutions now proudly boast of their number of admissions and the rate of results. They are most often not capable of handling the number of students that they intake and provide them with the attention that student requires. They are unable to control the discipline of so many students.

Once admissions have been granted, the institutions need to make arrangements and be equipped to deliver facilities to students equally. The parents also are ready to provide the fees for these expensive institutes but the real meaning of education is not being delivered as it ideally should have been.

Legal Bites: In the context of Indian Education System, why are none of the Indian Law Schools enlisted among the top law schools in the world? What do our institutions lack and how can we improve to stand anywhere close to the top tier law schools such as Harvard, Yale or the London School of Economics?

With so many admissions that the institutes’ intake, we fail to identify the problems faced by each student and how differently skilled each candidate is. Every student has different needs in terms of the span of attention each student can compensate for a lecture and us as law schools in India fail to recognize those needs from a student. It is necessary for law schools to be familiar with the intention, the passion, and the inclination of a student to become whatever they want to pursue and law schools in India need to cultivate this approach in their functioning. It is our duty to motivate them and keep them on their toes so that the student feels inspired and encouraged throughout the course. Legal Bites: Why are there only a handful of students who want to pursue their careers as a teacher? If we talk of earlier times, it was said that the profession of a teacher was a very pious and sacred one. What do you think changed the trend?

Dr. Shefali Raizada: The profession of a teacher in our times, and I am talking of a time about 20 years from now, was pious and sacred indeed, as you say but I would like to add that this profession is still a very pious and sacred one. I would like to mention a hierarchy that has been followed in almost every class in a law school. It was in our times also and it is very relevant even now. The toppers in a class always wanted to practice the career of a teacher. The ones who came within the top five or ten wanted to pursue the career of a civil servant or wanted to enroll themselves in the judiciary as government jobs were and are preferred by them for job security and the perks that came along with it. The students at the middle or mediocre level wanted to become lawyers and the ones who came below it opted for a career as a businessman or so. This hierarchy is almost similar in classes today also.

What changed the trend were the job profiles of a civil service graduate. This was set in around the ’90s and from since I think the craze of being an IAS officer or being a judicial magistrate or a judge has soared its way up till now. I would not say that teaching as a profession is probably the last choice of teachers now as when the process of recruitment takes place, we ask whether this is the last option of a career that they would have pursued and most of them deny that.

“Teaching is still as sanctimonious as it was earlier but yes, many choose a better paying job over teaching.”

Legal Bites: How relevant and important are online courses that most institutes offer as a certificate or diploma courses. Do you think they help in building a strong career base for the students?

Dr. Shefali Raizada: Online courses do not provide the main contents of a course. They are inclined to providing a supplement to the main course, like an additional value. If a law student is dependent solely on online education then he/she can never become a fully equipped lawman. Classroom teaching is the base of the process of education as a face-to-face interaction develops a better understanding of concepts.

Vivas and Non-Teaching Credit Courses (NTCC) are very important too. An online course will not provide a basic knowledge of concepts. Their primary motives are to find a way around the core teaching programs and their use should be made only if additional information is required.

Legal Bites: Ma’am, as the Dean of one of the leading law schools in the country, what advice would you give to students who are working towards being successful in their careers?

Dr. Shefali Raizada: I have always told my students to firstly, choose the right career for themselves. The students get very less time to decide what career are they really inclined to pursue and this should be their key purpose. I would ask them to take the time to decide what you want to be and once you have decided to be what they chose then I’d ask them to be focused. One has to face all the challenges that life throws at us and simply be focused in our minds. It is also important to not drop out or call off your pursuit when a challenging situation is put in front of you. Doing so shakes your confidence and is also sheer wastage of time. I would also suggest them to share their experiences and thoughts with their mentors or the heads of their departments or faculties or friends when they face difficulties in their lives.

Involvement in extra-curricular activities is also necessary to put your energy into the right use. I am glad that students are very energetic and have way more potential. They should also participate in cultural programs which open the minds of a student from a boring academically inclined lifestyle. These develop their hobbies and their abilities outside a classroom and bring a broader meaning to normal college life.

Lawyers have the quality of being a good leader and students of law should persevere to become good leaders.

Legal Bites: Thank you so much for your valuable time and consideration.