An analysis of the factors governing Online Censorship in India

A substantial amount of discussion has surrounded recent legislative pronouncements and administrative decisions regarding Online Censorship in India. Considering the same, it may be particularly pertinent to analyze the various determinants that have influenced the current regime governing cyber-censorship within the country. Introduction Over the past couple of decades, the use and proliferation of the internet have extended… Read More » 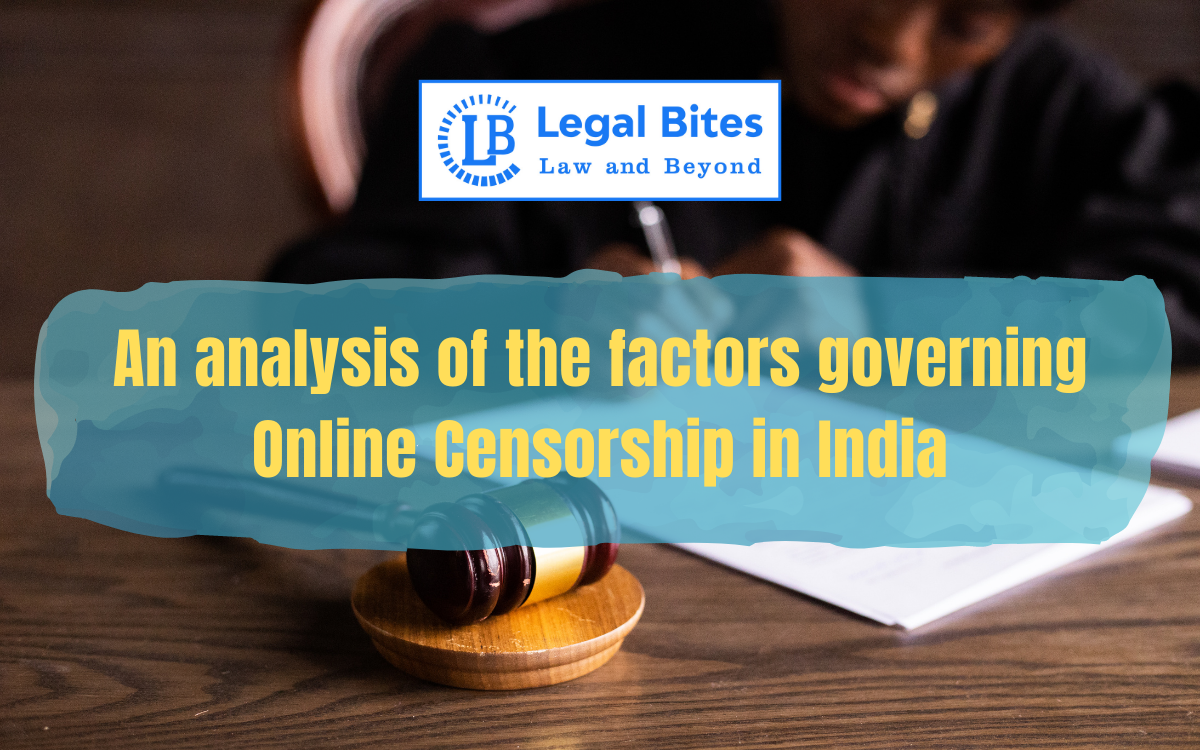 A substantial amount of discussion has surrounded recent legislative pronouncements and administrative decisions regarding Online Censorship in India. Considering the same, it may be particularly pertinent to analyze the various determinants that have influenced the current regime governing cyber-censorship within the country.

Over the past couple of decades, the use and proliferation of the internet have extended to an unprecedented degree, and individuals are increasingly dependent upon the same, not just for access to information and social interaction, but also for the facilitation of legislative, administrative and democratic processes, and even for their livelihoods. The latter being a fact that has been particularly pertinent over the last couple of years.

As a result of such widespread societal dependence on unimpeded access to the internet, cyber censorship has been a subject that has led to an inordinate amount of discussion, both in terms of its societal and legislative implications. The state or other relevant entities often impose the same by altering, commanding or suppressing the material that would otherwise be freely available online.

Methods used in executing the same may include content-blocking, application of specific data filters and/or the imposition of internet shutdowns. Justifications provided for cyber-censorship usually include the mitigation of threats to the security of the state, or the maintenance of public order, morality and/or decency

These limitations are usually met with opposition from the general public. Such responses are often predicated on the fact that these restrictions are largely violative of an individual’s right to freedom of opinion and expression, which is protected as a human right under the provisions of Article 19 of the Universal Declaration of Human Rights, as well as Article 19 of The Covenant on Civil and Political Rights.

The recognition and protection of human rights on the internet (especially freedom of speech), was considered to be imperative, and in pursuance of the same United Nations Human Rights Council passed a unique resolution that promoted guidelines designed to ensure that protection of individual rights would be just as much of a priority online, as it is otherwise.

Even though the resolution isn’t binding, it does strongly advocate for the adoption of specific regulations that would mandate the consideration of the individual’s right to freedom of speech, in the formulation of any legislation designed to regulate the internet.

As far as judicial pronouncements regarding the same are concerned, in the case of Ahmet Yildirim v. Turkey (2012), the European Court of Human Rights stated that access to online content should only be limited on the basis of provisions provided by comprehensive legislation, that provides specific checks and balances, in the form of Judicial review of all major restrictions imposed by the state.

The 2021 Information Technology Rules have specified that any content on online platforms that may be considered as being objectionable would make the intermediaries in charge of the management of such platforms, be responsible for the same. Even though these rules were specifically accompanied by provisions that provided safe-harbour options to the concerned intermediaries, these regulations were still widely considered as being overly restrictive and were met with opposition from various companies.

But, such regulations do belie a relative incomprehension or even disregard, of the basic content policies that often drive such platforms, as the specific subject matter within these websites are often determined by the individuals directly in charge of developing or managing the same. The intermediaries are often responsible for the maintenance of the platform itself and only possess broad discretionary powers.

A testament to this business dynamic is the fact that the UN Special Rapporteur made specific recommendations in both its 2005 and 2011 Joint Declarations, in regards to censorship being enacted by intermediaries. It classified the same as being potentially violative of the human rights of the users of such platforms; this statement was based on the educated assumption that such intermediaries would not be well-versed in regards to either the internal regulations of the platform or the legislative provisions that regulate the same.

As discussed above, the recent developments in regards to online censorship have not received a positive response. They are not only regarded as violative of article 19 but are also considered as being damn-near Draconian, garnering comparisons to the censorship laws In China. But, despite the opposition, the fact of the matter is that censorship laws project to be a fixture of internet regulation for the foreseeable future, as evidenced by the various provisions classified under Section 69 of the Information Technology Act, that specify the reasons for the various types of online-censorships, that the government intends to apply.

The same are often justified as being exceptions to the protections provided by the right to freedom of speech and expression, as specified under Article 19(2) of the constitution.

Crucially, In the case of Anuradha Bhasin v. Union of India, the Supreme Court held that online censorship is to be dependent upon the tests of proportionality and necessity. Therefore, the development of legislation specifically designed for the establishment of checks and balances in regard to internet censorship is to be considered an absolute necessity. The same should be formulated in consonance with the guidelines specified in the United Nations Human Rights Council’s Resolution. It is to be ensured that the censorship regulations being imposed, are designed for the purpose of protecting the interests of citizens, even if they compromise upon their convenience.