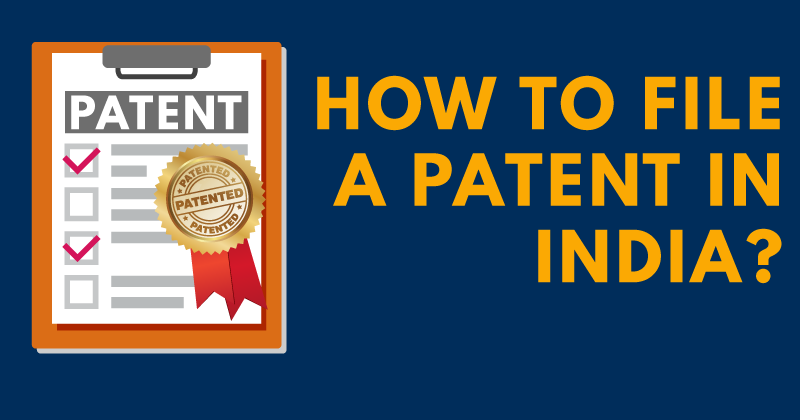 This article presents the steps on how to file a patent in India, enlisting a detailed filing process. The vital components required for an invention to be signified as a patent has been discussed in detail. It arranges a comprehensive analysis of the various criteria involved in filing a patent provisional application, extending over to publication and renewal.

Innovation plays a key role in the economic development of a nation. Patent is an exclusive right granted by the authorities to the applicant of an invention for a limited period of time in lieu of full disclosure of his invention. “Invention” means any new product or process involving an inventive step and capable of industrial application.

Any person claiming to be the true and first inventor of the invention can apply for a patent. Any person being the assignee of the person claiming to be the first and true inventor in respect of the right to make such an application can apply for a patent. Also, a patent can be applied by the legal representative of any deceased person who immediately before his death was entitled to make such an application.

First criteria for patenting is novelty. Novelty means that the invention should not have been published in India or elsewhere, and it should not have been in prior public knowledge in India. Second criteria for patenting is an inventive step. “Inventive step” means a feature of an invention that involves technical advancement as compared to the existing knowledge or having economic significance or both and that makes the invention not obvious to a person skilled in the art.

For applicants who are residents of India, the appropriate office is determined according to the place of residence/business/origin of the invention. While for applicants not resident of India or with no place of business in India, the appropriate office would be according to the address for service given in the application patent Head office in India is in Kolkata, and the branch offices are in Mumbai, Delhi, and Chennai.

The patent office comes under the Ministry of Commerce & Industry. Branch offices have their own fixed territory and accept application forms from areas lying within its geographical limits.

The Indian Patents Act, 1970 was passed and it came into force on April 20, 1972. The Patents Amendment Act 1999, was brought into force retrospectively from January 1, 1995. The amended Act provided for filing of applications for product patents in the areas of drugs, pharmaceuticals and agrochemicals though such patents were not allowed. However, such applications were to be examined only after December 31, 2004.

Procedure of filing a patent – File A Patent In India

An idea or concept can be filed as a provisional patent application in India. Patent drafting is techno-legal content writing of an invention to be filed in a patent office. The patent drafting follows guidelines laid out by the patent offices and differs from one country to another. After assuring that the invention is patentable, the inventor can proceed for drafting the patent in Indian patent format. Patent Draft format is decided on the basis of content and stage of the invention/innovation.

Provisional or non-permanent right is given to an inventor for establishing a priority for an idea or a concept with very less or incomplete technical information. Provisional application is a temporary application which is filed when the invention is not finalized and is still under experimentation.

An applicant/inventor can file a patent by direct visitation to patent office or direct online filing or through an attorney. Provisional Patent, as the word suggests, is not a final legal documentation and is suggested to be filed only if the inventor has incomplete information or just an idea and intends to get some time period to develop the product or gain complete information of the invention. Unlike non-provisional patent applications, there are no specific requirements or set guidelines for what has to be included in a Provisional Patent Application.

The nature of one’s idea- like whether it’s a simple consumer product or a game-changing innovation-has to be taken into account. If it is a simple consumer product one may be able to generate income without ever needing to file a non-provisional application. If it is a game-changing innovation, the person will need a wall of patents to keep others at bay. Provisional patent drafting has to be converted into a complete/non-provisional patent within a period of 12 months otherwise the patent priority lapses.

Complete patent specification is a legal document filed in the patent office for claiming the rights of an invention and its details. Complete/Non-Provisional Patent Drafting is a legal document prepared in techno-legal language and defined by boundaries set by Claims for the invention.

Complete Specification should be preferably drafted by experienced patent drafters who first identify the novelty aspects of the invention, defines the primary and secondary claims, structural limitations, drawings and details of the drawings and then uses their skills to create an enforceable patent application. The structure way of drafting the complete specification is as follows:

Step 3: Publication of the application

The date of publication is important as the patentor’s privileges and rights start from the date of publication, although they can’t enforce their rights by way of any infringement proceedings until their patent is granted. It is also important to know that there are a few scenarios under which a patent application may not be published and kept as a secret:

After publication invitation is available to the public so any person/party interested can file a request to the controller and can oppose the patent by writing an application to the controller.

Step 5 – Examination of the patent application

Every patent application which is filed for protection has to be substantively examined before a patent is finally granted. The examination process is where your patent application will finally be examined on merits of the invention as described and claimed in the patent specification.

On the contrary, some patentors may sometimes not want to get their application examined early for strategic reasons. Reasons for deferring the request could include extending the patent-pending life, waiting for funding, et cetera.

Once, the Request for Examination has been filed, it will eventually land up on the desk of the examiner from the relevant technology background for examination. During the examination process, the examiner will scrutinize the application to ensure that the application is in accordance with the Patent Act and Rules. The examiner also performs a search to understand similar technologies to ascertain if the invention would satisfy the patentability criteria.

Once, the FER is issued, the patent applicant needs to successfully overcome the objections to receive a patent grant. The whole process may involve responding to examination reports, appearing for hearing, etc. The total time needed to put an application in order for the grant is six months (earlier it was twelve months) from the date on which the FER is issued to the applicant. However, this six-month period can be extended for a period of three months by the applicant by filing a request for an extension of time (Form 4)

Once, the patent application overcomes all the objections, the patent will be granted and published in the patent gazette.

After the patent has been granted, it has to be renewed every year by paying the renewal fee. A patent in India can be renewed for a maximum period of 20 years from the patent filing date.