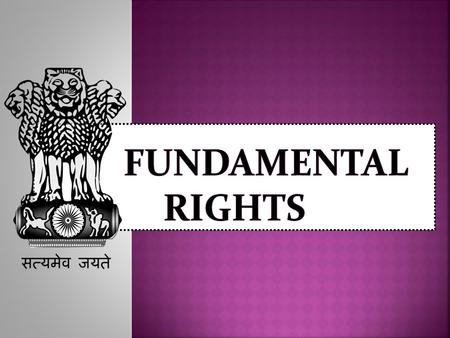 India guarantees a set of rights considered essential for protecting human dignity which is known as Fundamental Rights. The Fundamental Rights, as embedded in the Indian Constitution, ensure equal and fair treatment of the citizens before the law.[1] The rights that are basic to the advancement of the human race are called Fundamental Rights. All other rights are derived from these rights as direct implications or application of their principles. It is an accepted belief among the...

All other rights are derived from these rights as direct implications or application of their principles. It is an accepted belief among the philosophers that these rights are nothing but “natural human rights”, which distinguish between humans and animals and which have been so instrumental in bringing humans from the stone age to the present age. Among all, the right to life and liberty is considered to be the most basic.

The history of legally enforceable fundamental rights probably starts from the Magna Carta, which was a list of rights extracted from Kind John by the people of England in 1214 AD. This was followed by the “Bill of Rights” in 1689 in which Englishmen were given certain civil and political rights that could not be taken away. Later on, the French compiled the “Declaration of the Rights of Man and of the Citizen” after the French Revolution in 1789.

The most important advancement in the history of fundamental rights occurred when the USA incorporated certain fundamental rights in the form of the “Bill of Rights” in their constitution by the way of the first 10 amendments. These rights were deemed to be beyond the vagaries of politics. The protection by the constitution meant that these rights could not be put to vote and were not dependent on the whims of politicians or of the majority. After this, nearly all democracies of the world have given a constitutional sanctity to certain inalienable rights available to their citizens.

Technically speaking, the rights specified in Part III (Art 12 to 35) of the constitution are the fundamental rights available to the citizens of India. In the case of Menaka Gandhi v. Union of India, AIR 1978, J. Bhagvati has said that these rights represent the values that are cherished by the people of this country since the Vedic ages and are calculated to protect the dignity of individuals and to create conditions in which every human being is able to develop his personality to the fullest. These rights are necessary for a human being for attaining full social, intellectual, and spiritual status.

These rights can be grouped into 6 categories

This is reflected in Article 15, which, while prohibits the state from discriminating between the citizens only on the grounds of Caste, Race, Religion, Sex, and Place of Birth or all of them[ Art 15(1) ], also allows the state to make special provisions for Women and Children [Article 15(3)] and for Backward classes [Art 15(4)].

Article 17 abolishes untouchability and Article 18 abolishes various titles such as Rai Bahadur that used to be given in the British rule.

The cases of Lindsley v. Natural Carbonic Gas Co, US SC 1910 and Chiranjit Lal v. Union of India, SC AIR 1951 are important cases that illustrate the concept of equal protection of the laws. In these cases, the SC of both the countries held that all persons similarly circumstanced should be treated equally. Only like should be treated alike and thus a reasonable classification can be done. Several cases such as Randhir Singh v Union of India 1982 (Equal pay for equal work) illustrate the principle of equality.

The SC judgment in Indra Sawhney v. Union of India, AIR 1993 incorporates the element of fairness in dealing with inequalities in the society, while balancing the aspirations of the socially forward classes.

Article 20 gives protection with respect to conviction of offenses. This includes the principles of

Article 21, which is the most important and diverse of all the rights to freedom, is the Protection of Life and Personal Liberty. SC in Menaka Gandhi v. Union of India AIR 1978 was a landmark case that gave a wide interpretation of this right. In this case, the SC held that his right is not only about having any kind of life but a life of dignity.

Freedom is not just physical but mental as well as spiritual. This encompasses several rights such as the right to travel abroad (Satvant Singh v. Ass. Passport Office, AIR 1967) and the right to pollution-free water and air (Subhash Kumar v State of Bihar AIR 1991). Further, Constitution Amendment Act 86, 2002 makes free and compulsory education to children under 14 a fundamental right.

Article 22 gives protection from illegal arrest or detention. It provides that a person must be informed of the grounds of arrest as soon as possible, be allowed to speak to a lawyer of his choice, and be produced before a magistrate within 24 hrs. of detention.

Widest Possible Interpretation – SC in A K Gopalan v State of Madras AIR 1950 had held that the various rights given under part III talk about different things and are not be interlinked. This view, however, has been rightly rejected by the SC in Menaka Gandhi v. Union of India, AIR 1978 case.

In this case, J Bhagvati said that the role of SC should be to interpret these rights in the widest possible manner and it should not attenuate these rights by being confined to their narrow definition. All these rights are not mutually exclusive and form an integrated theme of the constitution. J Beg said that their waters must mix to form a grand flow of unimpeded and impartial justice. Thus, any law that takes away the life or liberty of a person, must also satisfy the test of reasonableness under Article 14.

Natural Justice and Due Process

In Menaka Gandhi’s case, SC has held that any law that takes away the life or liberty of a person under Article 21, must be just, fair, and reasonable. It must satisfy the principle of natural justice, which is a basic component of fair procedure under Article 21. While Art 21 does not contain the “due process” clause of the American Constitution, the effect is the same because natural justice is a distillate of due process i.e. natural justices can only be delivered through due process.

Expanding the role of writ of Habeas Corpus

The case of Sunil Batra v. Delhi Admin, AIR 1980 has given tremendous power to the writ of Habeas Corpus. It allows the judiciary to even enforce the fundamental rights in a prison. Even prisoners are humans and must be treated with dignity. They cannot be stripped off of their fundamental rights, thus menial or forced work without pay, solitary confinement, degrading punishment, is not allowed. This case has also allowed people who are not directly involved but have any kind of interest to approach the court. The objective is to remove injustice wherever it is found in society.

“Your freedom ends where my freedom starts” is a well-known saying.

These things clearly tell us that no right is absolute. Indian Constitution also takes the same stand and specifies the limits of these rights. These rights extend only until they do not affect the security of the state, public order, and social decency. The constitution allows reasonable restrictions to be placed on these rights. SC in A K Gopalan v. State of Madras, 1950 has also held that Fundamental Rights are not absolute.