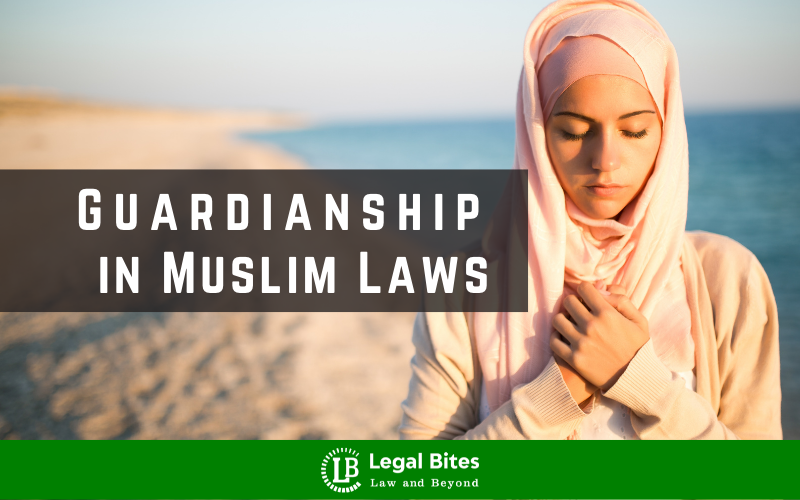 The present article, “Guardianship in Muslim Laws” will discuss guardianship under Muslim personal law in India, the different types of guardians, their powers and duties, with reference to statute and case-law, where applicable.

Guardianship of a minor refers to the overall supervision of the minor’s personality. It includes the care and welfare of the child including the liability to maintain the same. In Muslim personal law, guardianship largely refers to the guardianship of a minor, including his property by the natural, testamentary, or court-appointed guardian. Guardianship as a concept itself in Muslim personal law has many aspects that are not directly comparable to the Western concept of custody.

For example, guardianship may be distinguished from custody or hizanat under Muslim personal law, with the latter concept being associated with the welfare and care of a minor of tender age by their Muslim mother. The guardian, in whatsoever manner he is established, has certain powers and liabilities accruing to him by virtue of his position.

Who is a minor in Muslim personal law?

A minor is an individual who has not attained the age of majority as mentioned in the (Indian) Majority Act, 1875.[1] Except in the matters of marriage, divorce and Mehr, the Muslim community is governed by the rules of majority as defined in the 1875 Act.[2]

What are the categories of guardianship in Muslim personal law?

There are three major types of guardianship, and they are:[3]

What is guardianship? How is it different from custody?

Before discussing the Muslim personal law relating to guardianship, it is important to note that a statute known as the Guardians and Wards Act, 1890 regulates and defines guardianship in India. The Muslim law of guardianship is customary in nature and the only secular legislation on guardianship rules is the aforementioned 1890 Act. The 1890 Act had been enacted to protect the best interest of a minor and secure his property.

According to Section 4(2) of this legislation, the term ‘guardian’ refers to “a person having the care of a person of a minor or of his property, or of both his person and his property.”[4] However, as there is no express restriction that the provisions of this Act, it does not seem that it would interfere with the rules and customs of Muslim law relating to guardianship- although it shall definitely supplement the same. Thus, this definition of guardianship is also an appropriate description for the function performed by guardianship under Muslim law, saving customary differences.

I. Guardianship in Minor of Property

As mentioned in the introduction, the religious source texts largely refer to the guardianship of property, in terms of rules relating to guardianship in general.

As guardianship is seen as a patriarchal right, according to Radd-ul-Muhtar, the right of guardianship of the property of a minor belongs to the father, by preference and in his absence, it belongs to his executor.[9] In case the father has died intestate, without appointing an executor, then the grandfather is deemed the guardian.

After the death of grandfather, the guardianship belongs to the grandfather’s executor. Moreover, if the grandfather had died without appointing an executor, then guardianship is vested in the kazi who may himself act as such or may nominate someone else to act on his behalf.[10]

According to the Fatwai Alamgiri,[11] a comprehensive legal text of Hanafi law, the law of guardianship of the property of minor is as follows:

What are the different types of guardians?

There are three types of guardians under Muslim law:[13]

While the term ‘natural guardian’ is not used explicitly by Muslim jurists or appropriate texts, it is a useful term to consider because the father is recognized as guardian in all the schools of both the Sunnis and the Shias. In contrast, while the father of the minor is recognized as guardian, which is synonymous with the term ‘natural guardian,’ the mother of the minor in all schools of Muslim law is not given due recognition as a guardian, even after the death of the father.[14]

The rules relating to testamentary guardianship is different for Sunni and Shia schools. In the Sunnis, the father has the full power of making a testamentary appointment of guardian.[19]

Firstly, when she has been appointed a general executrix by the will of the minor child’s father, she can appoint an executor by her will, and

Secondly, she can appoint an executor in respect of her own property which will devolve after her death on her children.

It is only on failure of the natural and testamentary guardians, that the kazi is entrusted with the power of appointment of a guardian of a Muslim minor.[23] However, in modern India, the Muslim law of appointment of guardians by the kazi stands abrogated and instead, the matter is governed by the Guardians and Wards Act, 1890.[24]

Section 17 of the 1890 Act deals with the matters to be considered by a Court when appointing a guardian and it may do so whenever it considers it necessary for the welfare of the minor, taking into consideration the age, sex, wishes, of the child as well as the wishes of the parents and the personal law of the minor.[26]

In a 1996 case[27], the Gauhati High Court held that when the Muslim mother had remarried after the death of her husband, she should not be appointed a guardian of her minor daughter. Instead, the paternal grandmother was held to be a preferable guardian in the view of the court, and the court-appointed her accordingly.

What are the powers of guardians?

The various powers available to guardians of the minor’s property include the following:

“The ground of this is that the sale of movable property is a species of conservation, as articles of this description are liable to decay…on the contrary, with respect to immovable property, it is in a state of conservation in its own nature, whence it is unlawful to sell it-unless, however, if it be that it will otherwise perish or be lost, in which case the sale of it is allowed.”[31]

Thus, the sale of movable property is justified not just for the necessity of the minor, but on the basis of its conservation. It is provided that the guardian is allowed to take all reasonable risks which are involved in the world of business in his handling of movable property.

The provisions of the Fatwai Alamgiri[38] were not in favour of conferring any power on the guardian of leasing out the minor’s properties.[39] In fact, Ameer Ali has taken the view that the executor may give on lease the minor’s property, only if there be need to do so, and if it is advantageous to the minor. Moreover, he has also the power to pledge the goods and other movable property of the minor if it is essential for the maintenance of the minor.

In Zeebunissa v. Danaghar,[40] the Madras High Court held that a guardian of the minor has the power to lease out minor’s property if and only if it is for the benefit of the minor. It appears that the guardian cannot give leases of the minor properties extending beyond the period of the minority of the child.

According to the Hedaya, the guardian has power to carry on trade or business on behalf of the minor just like a person of ordinary prudence, provided that the trade is not speculative of hazardous in nature.[41] Another text, the Fatwai Alamgiri[42] endows an executor to invest minor’s property in partnership and goes so far to state that he may enter into partnership with others.

However, it can be argued that the element of risk that any trade or business offers, especially in the case of partnerships may pose a danger to the best interests of the minor in cases where aggrieved persons sue the minor for his involvement in any failed venture. The Privy Council in the past has held that though the guardian had the power to enter into partnership on behalf of the minor, the minor’s liability was only to the extent to which he had shared in partnership; in no case, the minor was personally liable.[43]

In India, there has been a conflict of judicial opinion as to whether the guardian of a minor under Muslim law as well as Hindu law, could enter into a contract on behalf of the minor, and whether such a contract is especially enforceable against the minor.[45] A slew of cases dealt with this question, starting with the Privy Council case in 1912,[46] wherein it held that it was not within the power of the guardian to bind the minor’s estate by contract for the purchase of the immovable property.

The issue, in that case, was whether the specific performance of a contract validly entered into on behalf of a minor could be granted. Following this, the observations in a case relating to Hindu personal law is relevant in this context because the obiter in this judgment was made in a way to be applicable to all bodies of personal law in India.[47]

In 1948, the Privy Council held that a contract entered into by a guardian on behalf of the minor, which is within the capacity of competence of the guardian and which is for the express benefit of the minor, is especially enforceable against the minor.

According to the Fatwai Alamgiri, the executor has no power to affect partition among the minors, and if he does so, the partition is not void in law and therefore unlawful.[48] Further, it is stated that if among the heirs some are minors, and some are adults, the the executor can separate the share of the adult heirs from the share of the minor heirs and hand it over to them, and retain the share of the minors in his hands.[49] However, it is forbidden in all cases that the guardian separate the shares of each minor and if so done, the entire partition is deemed invalid. If all the heirs are minors, the executor may allot the shares to the legatees, and retain the rest. In case a guardian is appointed by the court with general powers to deal with all matters of the minor, then the guardian has power to effect a partition.[50]

II. Guardianship of Minor in Marriage and Person

Under this form of guardianship, the father as an empowered guardian or ‘wali’ may contract marriage on the behalf of his minors. The power of imposition of marriage by the wali is known as ‘jabar.’[51] Apart from the father, the role of wali may even be assumed by the grandfather, mother, maternal relatives, full brother and other male relatives.

The Qazi or Court may also assume this role. A person who has renounced Islam cannot be a guardian of a minor Muslim girl for marriage.

Just as modern systems of law place the best interests of the child at the centre of guardianship in any form, the central principle of hizanat in Muslim law is the welfare of the minor.

It is for this reason that Shariat has always preferred the mother to the father in the case of guardianship of minor children in their tender years. If the hazina (the person who performs the function of hizanat) is cruel or neglectful towards the minor then she likely forfeits her right of hizanat.[52]

Interestingly, however, the lack of funds does not mean that the hazina loses her right of hizanat- if the hazina has no funds to maintain the child, then it shall be the responsibility of the father to provide for the hazina with a house and relevant financial support which is essential for the maintenance of the minor. Thus, poverty of the hazina is no ground for depriving her from custody. In case the child has property, then, the hazina may provide maintenance out of that property for the benefit of the minor.