Candidates preparing for Haryana Judicial Services should solve the Haryana Judicial Services Mains 2013 Previous Year Paper and other previous year question papers before they face  Prelims and Mains. Additionally, it gives an idea about the syllabus and the way to prepare the subjects by keeping the previous year questions in mind. All toppers are mindful and cognizant… Read More » 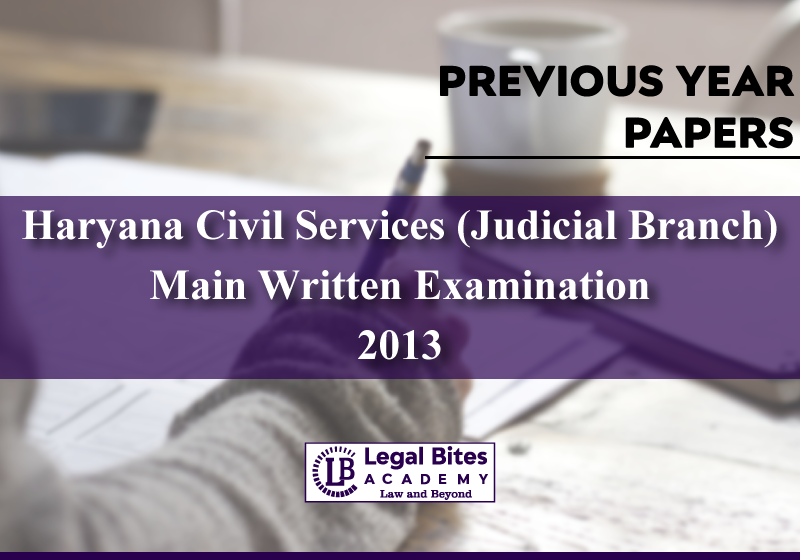 Only practising the authentic question papers will give you a real feel of the pattern and style of the questions. Here’s Haryana Judicial Services Mains 2013 Previous Year Paper (Civil Law-II).

A. Respond to the following fact- situations by applying relevant Statutes of Hindu law and citing case-law wherever required.

B. Respond to the following fact- situations by applying relevant provisions of the Hindu Marriage Act, 1955 and citing case-law wherever required: –

Against this background, discuss the concept of Fraud and decide whether Momita is entitled to relief on this ground? What other options are available to Momita under the Hindu Marriage Act, 1955 if she wishes to terminate her marriage with Sujoy.

A. Trace the history from the Shah Bano judgment which led to the enactment of the Muslim Women (Protection of Rights on Divorce) Act, 1986 and critically analyse the provisions of this legislation. Discuss the issues in relation to the constitutionality of this Act as raised before the Supreme Court in Danial Latifi and Another v. Union of India, AIR 2001 SC 3959.

B. In Abdul Kadir v. Salima (1886) 8 All 149, Justice Mahmood stated, “Marriage among Muslims is not a sacrament but purely a civil contract. “On the other hand, another noted scholar of Muslim Law, Abdul Rahim states that marriage among Muslims is both an Ibadat (devotional act) as well as muamlat (dealings among men). In the light of these statements, discuss the exact nature of Nikah, pointing out its essential features and referring to case- law wherever required.

C. Analyse the concept of Will in Islam and explain clearly the requirements of a valid Wasiyat and the means by which a Wasiyat can be revoked. Highlight the exceptions at the one – third rule of testamentary disposition of property among Muslims. Also, reveal the difference between the Shias and Sunnis with respect to the Law of Wills.

B. Mahendra Nanda was a rich man owning a lot of property. He is the owner of over 100 acres of land at Karnal, a huge mansion in the heart of Delhi and bank deposits worth several crores of rupees in India and abroad. He had two sons Sahil Nanda and Kapil Nanda and two daughter’s Rekha and Ritu.

Several years back, when Sahil and Rekha were returning from a work, their car crashed and both of them died on the spot. Sahil had two sons, Keshav and Kamal and a daughter, Vaibhavi of them, Kamal was the eldest one who had died of heart disease a few years after his marriage even before Sahil lost his life in the car crash.

Kamal is now survived by his widow, Aarti and two children-a-son (Anant) and a daughter (Prerna). Keshav and Vaibhavi are unmarried. Sahil’s widow is also alive. On the other hand, Rekha is survived by a son (Rishabh) and a daughter (Riddhi) Kapil and Ritu are alive and unmarried. Manendra Nada died interstate a few months back and is survived by the configuration in mind, determine the shares of each of the surviving members in Mahendra Nanda’s property as per the Hindu Succession Act, 1956.

A. ‘A’ is the agent of ‘P’, who resides in Chandigarh and ‘B’ handles one branch of ‘P’s has a business of collecting antique items and selling them to interested buyers. For the same, ‘A’ is required to hold periodical auctions of valuable antique items in Mumbai. One such auction was held on 02.03.2008. Around 15 items were sold for a collective price of Rs. 25 lakhs. The said amount was less than the normal recovery which is to be expected in auction.

‘P’ enquires regarding the same from ‘A’ over the telephone but does not receive any satisfactory answer. Due to his hectic schedule, ‘P’ is unable to visit Mumbai for the next two years. He visits Mumbai on 20.03.2010. Upon reaching there, he makes extensive enquiry about the said transaction and finds out that ‘A’ had failed to give adequate notice to the public of the auction.

B. ‘X’ wanted to institute a suit against ‘Y’ for the breach of contract by ‘Y’ in relation to a contract of sale of goods. The goods were delivered to ‘Y’ is yet to pay for the goods despite repeated reminders. The lawyer admits that ‘X’ has a good case and advises him to file a case in the Yamuna Nagar.

‘X’ is not inclined to file the suit in Yamuna Nagar as ‘Y’ resides there and would be able to secure good representation. ‘X’ wants to file the suit in the Faridabad where ‘X’ has some relatives where it will not be very inconvenient for ‘X’ to attend to the case. Thus ‘X’ files the suit in Faridabad on 06.06.2013. He is very diligent in attending the court and pursuing his case. He is personally present on each hearing. On 08.10.2014, the court in Faridabad dismisses the suit on the ground that it has jurisdiction to try the said suit. ‘X’ institute a suit against ‘Y’ in Yamuna Nagar on 20.11.2014. Discuss the rules of computation of limitation period applicable and decide the case? (15 Marks)

B. ‘A’ bequeaths property worth Rs. 2 Crores at his friend ‘B’. A’s family allege that the bequest is invalid for want of registration. Decide the case. (5 Marks)