This article titled ‘Five important Maxims in Law of Torts’  is written by Amisha Bansal and deals with various maxims like Ex turpi causa non oritur action, innuendo, res ipsa loquitor, etc. used in the law of torts along with case laws and their descriptions. I. Introduction A maxim is a rule or saying or a principle which… Read More » 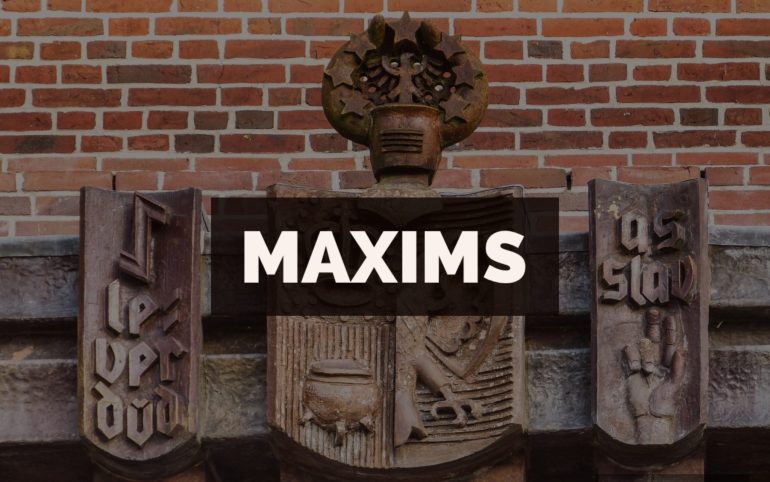 This article titled ‘Five important Maxims in Law of Torts’ is written by Amisha Bansal and deals with various maxims like Ex turpi causa non oritur action, innuendo, res ipsa loquitor, etc. used in the law of torts along with case laws and their descriptions. I. Introduction A maxim is a rule or saying or a principle which has to be followed by the society. Maxims are used in various branches of law to make a particular point to understand clearly and provide a proper solution...

This article titled ‘Five important Maxims in Law of Torts’ is written by Amisha Bansal and deals with various maxims like Ex turpi causa non oritur action, innuendo, res ipsa loquitor, etc. used in the law of torts along with case laws and their descriptions.

A maxim is a rule or saying or a principle which has to be followed by the society. Maxims are used in various branches of law to make a particular point to understand clearly and provide a proper solution to the case. Maxims are widely used in the Law of Torts. Torts, according to Winfield can be defined as,

”Tortuous liability arises from the breach of a duty primarily fixed by law; this duty is towards persons generally and its breach is redressible by an action for unliquidated damages.”

To make rules and principles much clearer, various combinations of Latin and French words are used in the subject.

The maxim literally means that ‘For every wrong law provides a remedy.’

Ubi jus ibi remedium is a Latin word which means where there is a wrong there is a remedy. It is even one of the essentials of law of torts. Where one’s right has been denied or invaded, the law provides a definite structure to safeguard the rights of that person.

Jus means a legal authority demanding or ordering to do something and the word “remedium” means a remedy. The basic principle contemplated in the maxim is that when a person’s right is violated the victim will have an equitable remedy under law. The maxim also states that the person whose right is being infringed has a right to enforce the infringed right through any action before a court. All law courts are also guided with the same principle of Ubi Jus Ibi Remedium.

The Circuit of Appeal of United States of America observed in the case of Leo Feist v. Young[1] that “It is an elementary maxim of equity jurisprudence that there is no wrong without a remedy.”

In the popular case of Ashby v. White[2], it was held that “When the law clothes a man with a right he must have means to vindicate and maintain it and remedy if he is injured in the exercise and enjoyment of it, and it is a vain thing to imagine a right without a remedy are reciprocal”. In the case, the defendant who was an officer in the parliamentary election refused to take a vote of the plaintiff, although the party of the plaintiff won the elections and there was no monetary damage to him. Yet, there was legal damage to the plaintiff and the defendant was liable to pay him damages.

When there is no legal remedy, there is no wrong. Unless and until a proper legal authority to check injustice is there in the society, wrongs cannot be defined and hence their definition remains vague.

It means that ‘A personal right of action dies with a person’.

The actions of torts are destroyed by the death of injured or the injured party. The cases cannot be passed over to the next person, other than the person himself. Besides this, an action may be brought by the personal representatives of the deceased.

The maxim was first used in 1496, where a woman died before paying the charges on her for defaming someone and hence, the maxim was applied and the tortfeasor could not recover the damages. Though it was first used by the King’s Bench in Cleymond v. Vincent (1523), it was popularized with cases like Bane’s case, Pinchon’s case etc.

Pinchon’s case[3] ruled that contractual liability was transmittable if the debtor had died, but the collateral promises get over with the death of the debtor.

It means that ‘From a dishonourable cause, an action does not arise’.

Ex turpi causa non-oritur action is a Latin phrase which means that the plaintiff would not be able to recover damages if it arises having in connection with illegal activity. This maxim is also called illegality defence.

In the case of Holman v. Johnson[5], it was ruled by Lord Mansfield, CJ that the case brought by the plaintiff was involved with illegal activity (smuggling) on the part of the plaintiff and hence, he cannot claim damages from the defendant. In this case, the plaintiff sold a large quantity of tea to the defendant on a bill of exchange, which he knew was further going to be involved in a smuggling business.

The defendant was unable to honour the bill and hence the plaintiff brought a suit in the court, which was duly rejected on the grounds of Ex turpi causa non-oritur action.

An illegal contract is not at all enforceable. A wrong act in itself which leads to a further wrong, cannot be pleaded in the court. The very act is the genesis of the many wrongs and hence is not enforceable in law. From such a base, no cause of action will arise.

It stands for ‘Something not explicitly stated, but has the secondary defamatory meaning’.

In Morrison v. Richie[6], the newspaper company published that Mrs Morrison has given birth to twins, but when actually she has married only 3 months ago. Though in a common notion, the statement is not defamatory, but if the full facts are known the statement is definitely derogatory on a lady and hence defamatory.

There are two types of innuendo meaning:

Alternative meaning which the ordinary reasonable person can read between the lines or infer from the words.

This is where the words appear to be innocent to some people but appear to be defamatory to others because they have special knowledge or extra information, an example of this would be, somebody who is said to be getting married which would not be defamatory to the majority of readers, but it would be to the readers who knew that the person was already married and as such would be committing bigamy.

Words need to be published to a third party.

The defamation act does provide a defence to persons who are not authors, editors, or commercial publishers if they took reasonable care in the publication and didn’t know or had any reason to believe that what they had done had contributed to the publication of a defamatory statement. This covers printers, distributors, online device providers etc.

An internet service provider who provides news content is not deemed to have behaved defamatory. If however once notified of the offending material the provider fails to remove, then it would not have acted reasonably and the above defence would then not be available.

In Cassidy v. Daily Mirror[7], the newspaper company published that the picture of the plaintiff’s husband with a girl posing with him stating that they both were engaged. The plaintiff, who was the actual wife got enraged as everyone in the society started thinking bad about her and her relationship with her husband and hence, sued the newspaper company. She was entitled to get damages.

‘Things speak for itself’.

Res ipsa loquitur is used in the cases of negligence, where proper evidence is not stated, but the facts are enough to decipher the negligence and prove the defendant guilty.

The maxim was first ruled in Byrne v. Boadle[8]. In the case, the defendant left a wheat barrel negligently from the third floor, which fell on the plaintiff and he suffered an injury. Here, perhaps no concrete proof was available, yet it was a case of res ipsa as it was evident that the defendant was liable for the damages.

Accidents happen all the time, and the mere fact that an accident has occurred doesn’t necessarily mean that someone’s negligence caused it. In order to prove negligence in a personal injury lawsuit, a plaintiff must present evidence to demonstrate that the defendant’s negligence resulted in the plaintiff’s injury.

Sometimes, direct evidence of the defendant’s negligence doesn’t exist, but plaintiffs can still use circumstantial evidence in order to establish negligence.

Res ipsa is one type of circumstantial evidence that allows a reasonable fact finder to determine that the defendant’s negligence caused an unusual event that subsequently caused injury to the plaintiff.

The res ipsa doctrine arose out of a case where the plaintiff suffered injuries from a falling barrel of flour while walking by a warehouse. At the trial, the plaintiff’s attorney argued that the facts spoke for themselves and demonstrated the warehouse’s negligence since no other explanation could account for the cause of the plaintiff’s injuries.

As it has developed since then, res ipsa allows judges and juries to apply common sense to a situation in order to determine whether or not the defendant acted negligently.

5.1) The presence of negligence

As mentioned above, not all accidents occur because of someone else’s negligence. Some accidents, on the other hand, almost never occur unless someone has acted negligently.

Going back to the old case of the falling flour-barrel, it’s a piece of shared human knowledge that things don’t generally fall out of warehouse windows unless someone hasn’t taken care to block the window or hasn’t ensured that items on the warehouse floor are properly stored. When something does fall out of a warehouse window, the law will assume that it happened because someone was negligent.

5.2) Only the defendant is responsible

The second component of a res ipsa case hinges on whether the defendant carries the sole responsibility for the injury. If the plaintiff can’t prove by a preponderance of the evidence that the defendant’s negligence causes the injury, then they will not be able to recover under res ipsa.

States sometimes examine whether the defendant had exclusive control over the specific instrumentality that caused the accident in order to determine if the defendant’s negligence caused the injury. For example, if a surgeon leaves a sponge inside the body of a patient, a jury can infer that the surgeon’s negligence caused the injury since he had exclusive control over the sponges during the operation.

5.3) The defendant owes the plaintiff a duty of care

For example, in many states, landowners don’t owe trespassers any duty to protect them against certain types of dangers on their property. Thus, even if a trespasser suffers an injury that was caused by the defendant’s action or inaction and that wouldn’t normally occur in the absence of negligence, res ipsa loquitur won’t establish negligence since the landowner never had any responsibility to prevent injury to the trespasser in the first place.

According to Res ipsa, the plaintiffs have to prove that the defendant acted with a negligent state of mind, through res ipsa loquitur, if the plaintiff puts forth certain circumstantial facts, it becomes the defendant’s burden to prove he or she was not negligent.

The main elements of res ipsa are: