Introduction to Constitution of United States of America 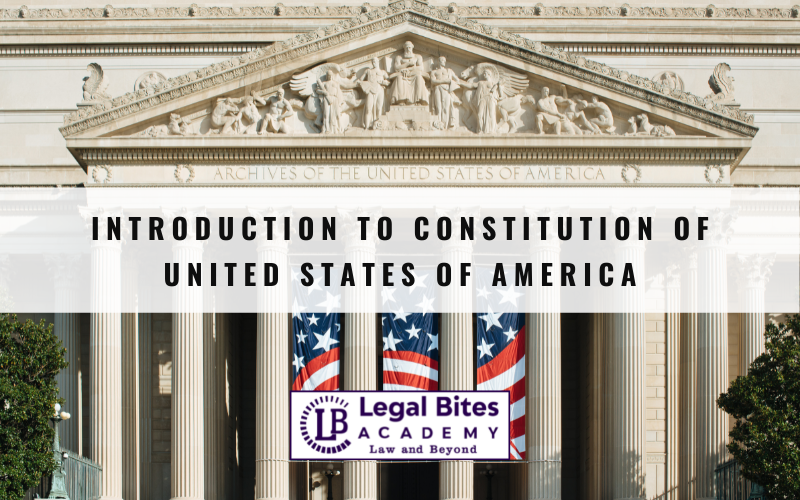 In this article ‘Introduction to Constitution of United States of America’, the author discusses the inception of the constitution and its lineage. I. Background The Constitution of the United States of America presents the countries fundamental laws. It characterizes the rights and liabilities of the American public and furthermore sets up the type of government in America. It additionally records the points that should be accomplished by the public authority. Earlier,...

In this article ‘Introduction to Constitution of United States of America’, the author discusses the inception of the constitution and its lineage.

The Constitution of the United States of America presents the countries fundamental laws. It characterizes the rights and liabilities of the American public and furthermore sets up the type of government in America. It additionally records the points that should be accomplished by the public authority.

Earlier, the nation’s leaders had set up a coalition among the states under the Articles of Confederation. However, the Congress made by the Articles came up short on the power to make the states cooperate to take care of public issues.

Since the seventeenth day of September 1787, a one-archive constitution has been considered a fundamental quality of nationhood. Today, of the 192 autonomous countries of the world, all countries except a few have such a constitution or are focused on having one. Among the exemptions are the United Kingdom, New Zealand, and Israel are vote based countries with complex established statute however no explicit record that can be known as a constitution.[2]

The actual Constitution is brief. One can peruse it in no time flat. The Constitution comprises of a preamble, seven articles, and 27 amendments. It sets up a bureaucratic framework by splitting powers between the national and state governments. The initial 10 amendments of the Constitution is called as Bill of Rights.

II. Introduction to Constitution of United States of America

Article I of the Constitution consists of 10 sections, which sets up the significant harmony between the legislative and executive parts of the government authority by giving that the President may reject enactment, however, that, if this enactment is again passed by the two Houses of Congress by 66% greater parts, it will become law. A bill may likewise become law if the President doesn’t sign it, however neglects to return it to Congress within ten days.

By characterizing the powers of Congress, Article I of the Constitution characterizes those powers which are assigned to the Federal Government (States). These incorporate the right to collect taxes and, to control the financial framework, regulate foreign and between state trades, conduct foreign relations, make war and peace, manage domains and concede new states to the Union.

Congress was additionally given the position to fix weights and measures, award licenses and copyrights, raise and keep the military and its navy, administer naturalization laws.

Article II of the Constitution set up the chief as a President, chosen indirectly by individuals for a term of four years. The leader power is vested in the President. His obligations are to see that the laws being executed, to have order of the military and naval power, to make treaties, appoint commission officials, and award respites and absolves.

His power, however, was checked by two significant stipulations: all appointments to significant Government positions should be affirmed by the Senate and all settlements with unfamiliar powers should be endorsed by a 66% vote of the Senate. Other provisions of the Article require the President “from time to time” to give Congress information on the “state of the union”.

Article III of the Constitution sets up the third part of the government, the Judiciary, with the words, “The Judicial power of the United States will be vested in one Supreme Court and in such lower courts as Congress may every once in a while appoint and set up.”

Federal Courts were given purview over Federal laws, over cases influencing representatives, chief of naval operations’ office law, and debates in which a state or individual from a state are in struggle with those from another state. States have their own Judiciary framework and will undoubtedly abide the Constitution and Federal laws and treaties just as the constitutions and laws of the states.

The leftover four Articles concern the relations between states, the procedure for revising the Constitution, the amendment and ratification of the Constitution, and the significant declaration that ” this Constitution, and the laws of the United States which will be made in compatibility thereof; and all treaties made, or which will be made, under the authority of the United States and will be the incomparable tradition that must be adhered to; and the adjudicators in each State will be bound subsequently, anything in the Constitution or laws of any State unexpectedly regardless.[4]

The initial ten amendments to the Constitution were sanctioned following ratification and are known as the “Bill of Rights.” Some states approved the Constitution just depending on the prerequisite that such a bill be made a piece of the new archive. Although a list of these rights previously existed in state constitutions, these ten amendments were established to put limitations on the public power and to ensure assurance against persecution by the Government.

The additional amendments have adjusted the Constitution to address defects, which have emerged and to adjust the Government to evolving conditions. [5]

The idea of constitutionalism suggests that the administration will conform its conduct to a law higher than normal enactment and that this assortment of a higher law is set out in a document called the constitution or some other type of fundamental law.

Present day constitutionalism for the most part powers two unique sorts of limitations upon the activity of legislative powers: partition of powers and individual rights. By distributing powers among different parts of government and assorted political units and by ensuring certain basic rights to people against legislative intervention. Current constitutions go about as significant constraints upon legislative power.[6]

[1] The Constitution of the United States of America with Explanatory Notes by U.S. Senator Daniel Webster March 15, 1837