An introduction to Tort Law

This article titled ‘An introduction to Tort Law’ is written by Anamika Gandhi aims to introduce readers to the basic elements of tort law such as the definition, nature, and the scope of tort. I. The aims of tort law Tort Law aims to provide redress to parties whose legal rights may have been affected by a civil… Read More » 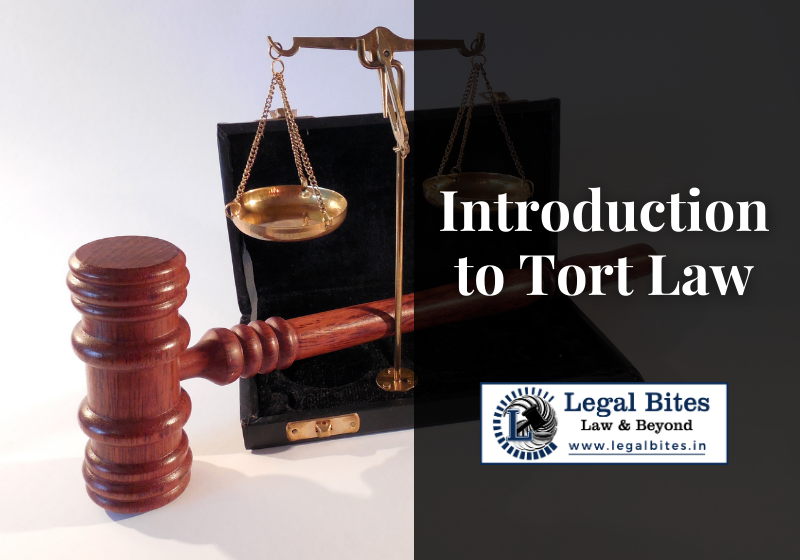 This article titled ‘An introduction to Tort Law’ is written by Anamika Gandhi aims to introduce readers to the basic elements of tort law such as the definition, nature, and the scope of tort. I. The aims of tort law Tort Law aims to provide redress to parties whose legal rights may have been affected by a civil wrong. However, not all civil wrongs find redress under the law of tort. Law is society’s instrument to regulate the behaviour of people. While some laws provide a...

This article titled ‘An introduction to Tort Law’ is written by Anamika Gandhi aims to introduce readers to the basic elements of tort law such as the definition, nature, and the scope of tort.

I. The aims of tort law

Tort Law aims to provide redress to parties whose legal rights may have been affected by a civil wrong. However, not all civil wrongs find redress under the law of tort.

Law is society’s instrument to regulate the behaviour of people. While some laws provide a nearly comprehensive structure for regulation, other areas of law merely truncate the behaviour at the margin, dividing what society deems as acceptable from that deemed undesirable. The law of torts is one such branch of law. [1]

The term “tort” is derivative of the Latin word tortum which literally means “crooked” or “twisted”. The term “tort” is nowadays used to denote a civil wrong independent of a contract, for which compensation in damages is recoverable. In its most general sense, “tort” is wrong[2]

The law imposes on everyone a duty to respect the legal rights of other members of society and the violation of the same is punishable under the law of torts and remedy in form of unliquidated damages is provided to the party that has been wronged. Eg- defamation, cases of strict and absolute liability etc.

To extract compensation as per tortious liability, two conditions must be present-

However, it is to be noted, that damage alone will not suffice to give him who suffers, a right of action. If the lawful exercise of a right causes loss to another, then that act is not actionable under tort.

For example, if there are two shopkeepers trading in the same business, say A and B, and A starts selling the same commodity at a discounted rate, that causes detrimental damage to B; here even though B suffers damage, B cannot recover for this damage from A because there was no wrongful act committed by A.

II. The definition of tort

While no specific definition of tort has been possible which could be unanimously agreed by all the thinkers, certain attempts to define tort have been made, and will be listed below:

“Tortious liability arises from the breach of a duty primarily fixed by law; this duty is towards persons generally and its breach is redressible by an action or unliquidated damages.”

“It is a civil wrong for which the remedy is a common-law action for unliquidated damages and which is not exclusively the breach of a contract or the breach of a trust or other merely equitable obligation.”

Underhill defines it as:

“An act or omission which, independent of contract, is unauthorized by law, and results either in the infringement of some absolute right to which another is entitled, or in the infliction upon him of some substantial loss of money, health, or material comfort, beyond that suffered by the rest of the public, and which infringement or infliction of loss is remediable by an action for damages.”

“Tort is an act or omission (not merely the breach of a duty arising out of personal relations, or undertaken by a contract which is related to harm suffered by a determinate person, giving rise to a civil remedy which is not an action of contract.”

III. The nature of tort

Taking from the example of shopkeepers that we mentioned above, here even though B is wronged financially, it is not a wrong that the law recognizes as unlawful, and hence A is not liable for tortious liability.

Deriving from the above discussion, tort may be defined as “a civil wrong that is redressible by an action for unliquidated damages. Additionally, tort covers a civil wrong which is other than a mere breach of contract or breach of trust.”

Thus, it may be observed that:

A fundamental characteristic of tort is that it is a civil wrong. Tortious liability does not cover criminal wrongs. However, a particular wrong may be covered by both civil and criminal laws.

The very basic nature of criminal and civil wrong is distinct from each other. In the case of a civil wrong, it is the injured party that institutes civil proceedings against the wrongdoer. While on the other hand, the criminal proceedings against the accused are brought by the State. Moreover, in a criminal wrong, the victim of the crime is not compensated monetarily. Justice is administered by punishing the wrongdoer in the form of incarceration.

2. A tort is a civil wrong other than a mere breach of contract or a breach of trust

The best way to go about finding whether a wrong is a tort or not is through the process of elimination.

However, it may be noted that there is a possibility that the same act may amount to two or more civil wrongs, one of which may be a tort. For example, if A delivers his luxurious car to B for safe custody for a week and B allows the car to be used by other people who were obviously not authorised by A in the first place, B’s act amounts to two wrongs— the breach of contract of bailment and the commission of tort of negligence.

Since both the wrongs are civil wrongs and damages are the main remedy for any kind of civil wrong, the plaintiff can claim damages either under the law of torts for negligence or for the breach of contract of bailment. But he cannot claim damages twice.

3. A Tort is redressible by an action for unliquidated damages

IV. Comparison between a contract and a tort

There are some fundamental differences between the law of contract and the law of tort.

First, it is established that tortious duties exist by virtue of the law itself and are not dependent upon the agreement or consent of the persons subjected to them unlike in a contract, where the duties of the parties towards each other are premeditated and agreed upon.

Secondly, while the main idea of the law of contract is of enforcing promises, tort aims principally at the prevention or compensation of harms.

A tort is a wrongful act, ordinarily of the kind that causes injury to the body or property. By contrast, wrongful acts in the contracts field are in effect broken promises. That is, when a person does not perform the legal obligation of a freely entered contract, that person has breached a binding promise and thereby committed a legal civil wrong.

V. Comparison Between a Tort and a Crime

Firstly, a tort is an infringement of the private or civil rights belonging to individuals, whereas, a crime is a breach of public rights and duties that affect the whole community. Secondly, in tort, the wrongdoer has to compensate the injured party, whereas, in a crime, he is punished by the State. Thirdly, in tort, the action is brought by the injured party; in crime, proceedings are conducted in the name of the State.

Thus, it can be concluded from the above discussion that tort is an act or omission, which should necessarily be a civil wrong leading to legal damage, and is redressible through an action for unliquidated damages. The study of the law of torts is, therefore, a study of the extent to which the law will shift the losses sustained in modern society from the person affected to the shoulders of the person who caused the loss.