Home  »  Articles   »   Iraq Under Saddam Hussein and His Flawed Trial 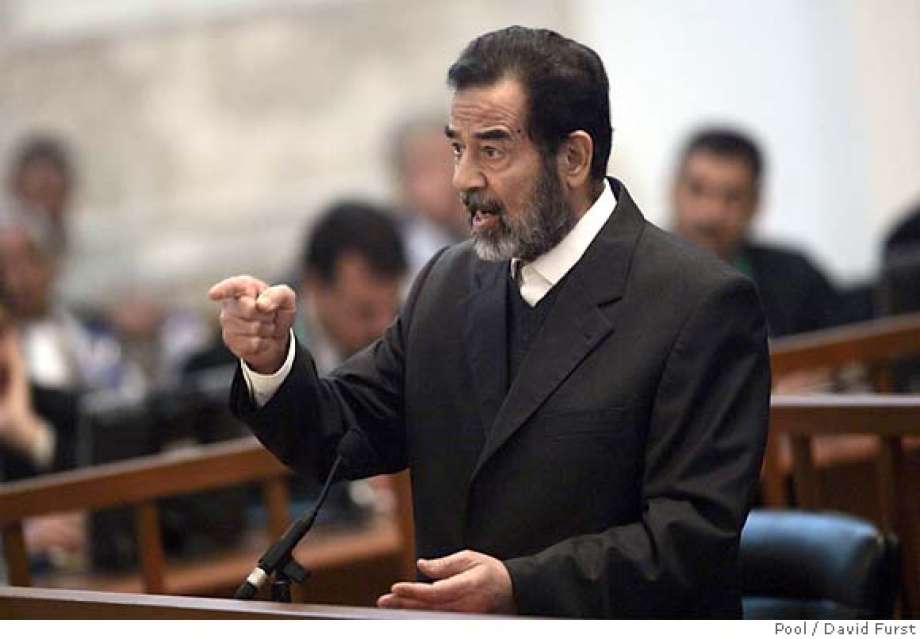 This article is an account of Iraq under Saddam Hussein and his abominable politics that led to a Flawed Trial of the dictator. Iraq suffered greatly under the barbaric regime of Saddam Hussein whose removal was a spectacle for the world but the flawed trial that sentenced him to death was condemned globally because of the disregard for the sanctity of legal procedures.

As one of the most notorious generals, the infamous dictator of Iraq was seen as a threat to the security of other democratic countries, especially by the West. The brutal killings ordered by him were condemned widely until he was overthrown by the United States military in an operation to restore stability in the region.

But there is a legal procedural framework for the fair trial of all accused. The overlooking of these procedures showed the fast track mode that the United States had adopted to bring one of the most despised leaders to his end at the cost of flouting proper legal procedures.

After gaining freedom from the British rule in 1932, Iraq witnessed intense turmoil because of the monarchy and a series of successions. Nuri es-Said became the first prime minister who dominated the Iraqi politics and worked for the westernisation of the country. But this was soon to change with a military coup.

The royal family of the monarchs was massacred and a republic regime was adopted by General Abdul Kareem who was in turn, murdered in 1963. The installation of a nationalistic regime after the rise of the Ba’ath Party ensured stability in the region. Ahmad Hassan al-Bakr became the new leader of the country in 1968, whose counsel, a general named Saddam Hussein grew to prominence as one of the most influential leaders in the government of Iraq.

Saddam played an important role in the military coup of 1968[1] that established a new leader, Ahmad Hassan al-Bakr as the president of the country while emphasizing on the importance of Ba’athist unification. He was the deputy of the Ba’athist party and played a significant role in the politics of the country.

Iraq had been deeply divided on ethnic and racial lines which were suppressed by Saddam and a position of power was enjoyed by the minority Sunni population. Saddam was the ‘de facto’ or informal leader of the country until he gained complete power in 1979.

Being an important catalyst in the orchestration of coups, he ensured strong security structures to prevent any further coups in the country to prevent the loss of power from his own hands.

Saddam saw development as the centrepiece of his rule and worked for the development for the economy of Iraq. He aimed at widening his support of the people in the country. Iraq had massive oil deposits which benefitted him greatly because of the skyrocketing of the oil prices in the world which helped him further, fuel his agenda.

In 1976, Hussein rose to the ranks of a general and became the de facto leader of the country under the leadership of ailing Ahmad Hassan al-Bakr. Much of what happened as the part of Iraq’s internal as well as foreign affairs were controlled by the general. But in 1979, when the talks on the unification of Iraq and Syria began, Saddam was quick to transfer powers to himself and became the leader of the country which would have otherwise been lost due to the unification of the Ba’athist parties.

The Iraqi economy thrived in 20 years[2] of the Ba’athist rule since the 1960s, finally reaching its pinnacle in 1980. This was mainly due to the rich oil deposits in the country. But after the accent of Saddam, Iraq waged a war on Iran followed by the invasion of Kuwait in 1990 which resulted in the Persian Gulf war which caused the economy to nosedive. This also adversely affected the infrastructure of the country. An estimated loss of $232 billion was incurred due to the ordnance dropped on Iraq during the war in 1991.

Iraq in its war against Iran, in 1980, used chemical weapons which were claimed to be provided to them by Germany and the United States of America[3]. Chemical weapons such as mustard gas and nerve gas[4] were used on at least 10 different occasions which killed hundreds of thousands.

This led to an investigation into the legal accounting of the biological weapon held by Iraq. This revealed that Iraq maintained stockpiles of weapons demarcating a huge gap in the amount accounted for. The war was condemned by most of the nations because of the huge loss of lives that occurred, violation of human rights and also because of the destabilization caused in the gulf region during this war.

Furthermore, on investigation, it was found that Iraq had been working on its nuclear project to build bombs. Iraq withheld documents relevant to its past nuclear program, including data about enrichment techniques, foreign procurement, weapons design, experimental data, and technical documents. Neither had it accounted for 15000 artillery rockets and 500 shells that it possessed.

Iraq itself admitted to the production of biological agents such as thousands of litres of anthrax, botulinum toxin, and aflatoxin for use with Scud warheads, aerial bombs and aircraft.

Iraq was also believed to be developing ballistic missiles with a range greater than 150 km which was in violation with the United Nations Security Council Resolution 687.

The atrocious reign of the dictator was widely criticized for the grave violation of human rights on several grounds. There was no freedom of speech[5] and the people were repressed by the horrendous acts committed by the government on the Iraqi civil population. It was required of his government to allow access to human rights organizations to provide assistance to those in need which was not carried out by the government. The acts did not spare women and children either.

Despite several resolutions, torture and execution of several innocent Iraqis, was not stopped. Saddam repeatedly turned down requests by various establishments of independent human rights organizations and even the special UN Rapporteur from visiting Iraq.

Saddam was responsible for the capture of at least 605 civilians during the Kuwait war as prisoners of war that were never accounted for[6].

There were many cases of women suffering from mental trauma because of rape while under the custody of Iraqi personnel. It was discovered that these systematic and institutionalized acts were often done for political benefits. Iraqi forces also allegedly raped women captured during the Anfal genocide campaign during the war in Kuwait.

Amnesty International reported that a dozen women were executed on the charges of prostitution. They also reported about the decapitation of people in front of their family members.

Some of the torture techniques adopted by the regime were breaking of limbs, burning, branding, electric shocks, denial of food and water and dropping acid over the skin.

According to a UN Rapporteur 1998, prisoners of war were used as subjects for experimentation of biological weapons. UN Human Rights Special Rapporteur Max Van der Stoel’s report in April 1998 revealed that Iraq had executed at least 1,500 people in 1997 for various political reasons.

Opposition to his inhumane regime was suppressed as well and people vocal about his dictatorial regime were often executed including media personnel. Freedom of thought, speech and information was a privilege that did not exist in the country.

Amnesty International reported that Iraq has the world’s worst record for the numbers of persons who disappeared or were unaccounted for.

Multiple resolutions in the United Nations were passed against the acts committed by Iraq which were defied, be it related to the tactics adopted during warfare or the treatment of the civil population in the country. But these resolutions were flouted and the conditions remained to be same.

The Flawed Trial of Saddam

In March of 2003, the United States of America invaded Iraq to restore peace and stability in the region and to end the homicidal regime of the dictator. In a matter of a few weeks, Iraq fell and Saddam went into hiding, only to be found in December that year inside a hole in his home town of Tikrit.

Coalition Provisional Authority, an interim transitional government was set by the US government to restore tranquillity and eradicate any signs of the dictatorship.

A special court called Iraqi Special Tribunal was set up by the interim government to ensure justice for thousands of innocents who had lost their lives to the genocides meditated by Hussein.

But the Iraqi Special Tribunal was a charade that was constituted by the interim government which was neither a domestic nor a sovereign body. It was controlled politically as well as bureaucratically by The United States of America. This was a clear violation of Article 66 of Geneva Convention IV which ensures a properly constituted non-military court in that country.

The court itself wasn’t governed by any United Nations regulations and was essentially a US-controlled court working under the guise of an Iraqi authoritative independent judicial body working to bring the country’s perpetrator to justice.

The occupation of Iraq in itself was illegal and in a clear violation of Article 2 of the Charter of United Nations. This act was justified by the US claiming Iraq’s involvement in the September 11 attacks in the United States which was found to be untrue.

Paul Bremer, an American diplomat who was to oversee the transition of power to the Iraqi government vested in himself powers far more than Saddam himself and was the country’s chief executive authority.

Furthermore, according to the Hague Regulations, 1907, Article 42 confers that a territory under military occupation is controlled by the military of the occupier. Hence showing that neither was the interim government nor the tribunal actually free.

Sabah Al-Mukhtar[7] of the Iraqi Lawyer’s Association criticized the actions taken by the United States and claimed that the United States had a complete disregard for the trial of the defence of Saddam Hussein who was denied access to defence counsel and was often not provided with the documents, evidence and transcripts of the court.

Rizgar Mohammed Amin who presided over the court as the chief judge of the tribunal was removed for being too soft on the defendants which rather seemed to be a breach in the independent trial by the government.

Saddam was finally held guilty for the Dujail killings of 1982 and the Anfal campaign that took lives of hundreds of thousands. He was executed by hanging in November 2006[8].

This has often been dubbed as a show parade before marching him to his premeditated death mainly because of the legitimacy and credibility of the trial. The impartiality of the bench was a blotch on the trial which stripped off its right to be called fair by human rights groups and the failure of the replaced chief judge to demonstrate proper judicial demeanour in his management of the proceedings.

Guilt was established, for Saddam was the perpetrator who had the blood of millions on his hands but by the means of a farce trial. This flawed nature of the trial undermined the legal proceedings into the atrocious rule of Saddam Hussein.

The basic need for law is to ensure a fair trial while maintaining a legitimate standard, investigating into the spectrum of various dimensions involved. The law is not the same as Saddam and a fair trial needed to be ensured no matter the scale of the crimes committed.

The inhumane crimes committed by Saddam Hussein were heinous and brutal. He is one of the most notorious leaders that ever lived who was responsible for killings of millions but the route taken to deliver justice to those who had lost their lives at the hands of the cruel regime was wrong. The flawed trial of Saddam is a point in history that was criticized by various human rights group because even perpetrators deserve the chance to be tried fairly.

One thought on “Iraq Under Saddam Hussein and His Flawed Trial”