Is Wi-Fi Hacking Legal in India?

The article ‘Is Wi-Fi Hacking Legal in India?’ is an extensive analysis of the evil attack of hacking and also about the hacker’s agenda behind doing it. Through this article, the author has taken an active step in order to spread awareness about the rapid increase of hacking in India. Hackers are utilizing their minds in unlawful acts. The… Read More » 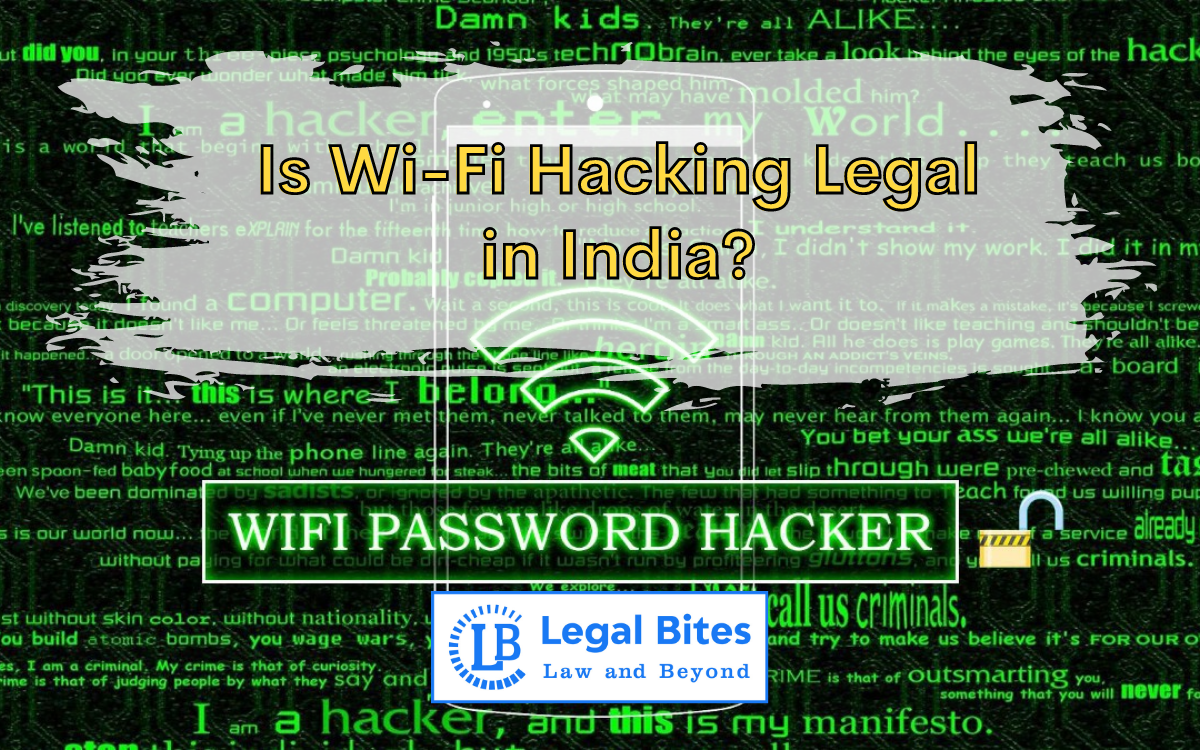 The article ‘Is Wi-Fi Hacking Legal in India?’ is an extensive analysis of the evil attack of hacking and also about the hacker’s agenda behind doing it. Through this article, the author has taken an active step in order to spread awareness about the rapid increase of hacking in India. Hackers are utilizing their minds in unlawful acts. The author through various legal references came to the conclusion that hacking is not legal in India. Indeed, the legislative works are worthful in this area too.

The Author elucidated the various provisions of the Information Technology Act and the Indian Penal Code which reflects hacking as a punishable offence. As per the need, various amendments were brought to the legislative provisions and even a stern step was taken in order to bring provisions related to specific cybercrimes.

In this contemporary world, every individual is connected with one another directly or indirectly through the string, which is the internet. As everything has its plus and minuses, the internet has too. With the development and widespread use of the internet, cybercrime has come into play affecting many individuals severely. In India, Information Technology Act was introduced in 2000 to recognize, eliminate and prevent these threats.

Before talking about hacking, we will go for a hacker. What comes to our mind when we first think of a hacker? A mastermind with a mask, gazing at the desktop with his fingers running non-stop over the keyboard. However, this is not the actual concept of a hacker. Nowadays, cyber crimes have shown a steep rise, and a person next door can also be a part of it. Hackers are increasing their numbers every day, and are using unidentifiable attack methods to remain anonymous and prevent themselves from the cyber security software and IT teams.[1]

What do we do when we come across a term that we don’t know? We ask google, isn’t it? So, starting from the basics and going with what google has to say about hacking is that- to use a computer to look at and/or change information that is stored on another computer without permission

Hacking is the action of compromising on networks and devices through unauthorized access to the computer system. It is not always done with bad intent but is mostly unlawful. In other words, we can say that hacking is entering into the cyberspace of another person without authority through devices like smartphones, computers, and networks.

Ankita Fadia, a great mastermind in the field of hacking in India said:

“Traditionally, hackers were computer geeks who knew almost everything about computers ad were widely respected for their wide array of knowledge. However, over the years the reputation of hackers has been steadily going down. Today, they are feared by most people and are looked upon as icons representing the underground community of our population.”

What is Wi-Fi Hacking?

If we need to understand Wi-Fi hacking in layman’s terms. We need to imagine a situation. Imagine yourself in your house. You bought a lavish and comfy couch for yourself and you are on it in your living room. A hooligan enters your house, steals everything you have and destroys the things he cannot take, and goes away. Now, imagine yourself again in the same situation, but this time someone enters your house without being noticed and sits somewhere up at a place that is always unnoticed by you. That person is now able to see everything that you are doing without your knowledge. We can consider the latter as Wi-Fi Hacking.

Wi-Fi hacking is basically hacking the security protocols of a wireless network, which gives the hacker complete access to view, store, download, or abuse the wireless network. Usually, what happens is when someone hacks into a Wi-Fi, they can easily spy upon all the data that is being transmitted through the hacked network.[2]

Why is it done?

Why would anyone trespass on your property? Simply to take/steal something that he wants or damage something that is precious to you. Similarly, hacking is done simply to cause damage to the system or to the corrupt system, collect information from the user, steal data and documents, or shatter data-related activity. A person who is able to hack into the Wi-Fi/wireless network gets access to anything and everything that is being done by you online.

But, how do you get to know that your Wi-Fi has been hacked?

Is Wi-Fi Hacking Legal in India?

It is a very simple question, the answer to which is not found directly. If you think that someone breaking into your house, trespassing on your property, and hampering your privacy and property is legal, then so will be hacking. However, if you know your rights and are against the infringement of your right, then yes, hacking is illegal.

To put it straight, if a hacker is capable of accessing the data on your computer including images/videos sent or received, web pages hopped, able to mould data, erase the important documents and information or use it for the personal purpose/benefit and moreover intrude into a person’s privacy, and infringe the fundamental right of right to privacy of a person through trespassing, then there remains no reason to call hacking a legal act.

Explanation.–For the purposes of this section,–

(b) The word ―fraudulently shall have the meaning assigned to it in section 25 of the Indian Penal Code (45 of 1860).

Whereas, Section 43 A of the same act says:

Compensation for failure to protect data.–Where a body corporate, possessing, dealing, or handling any sensitive personal data or information in a computer resource which it owns, controls or operates, is negligent in implementing and maintaining reasonable security practices and procedures and thereby causes wrongful loss or wrongful gain to any person, such body corporate shall be liable to pay damages by way of compensation to the person so affected.

Initially, the IT Act penalized cyber-crimes under a wide ambit through sections 43, 66, and 67, but subsequently in 2008 that amendment took place in the IT Act, and provisions were made for specific cyber-crimes.

How to file a case

India has seen development in various dimensions and one of them is the setting up of numerous cyber-crime cells across the nation.

Whenever an individual breaks the security conventions in a wireless network which gives him complete access to it and he takes out an advantage of the remote network, which is possessed secretly, it is called hacking a private Wireless Fidelity network. As it is very difficult to keep ourselves safe these days, it must not be forgotten that we too are responsible for our security. To be safeguarded from such unlawful acts done by unethical hackers, we must from time to time run a security scan over our networks and be very careful while sharing the passwords of the respective networks as it can ultimately ruin us.

As there goes a very famous quote:

‘for every lock, out there is someone trying to pick it or break in.’

[1] What is Hacking, Available Here

[4] India: Cyber Crimes Under The IPC And IT Act, Available Here