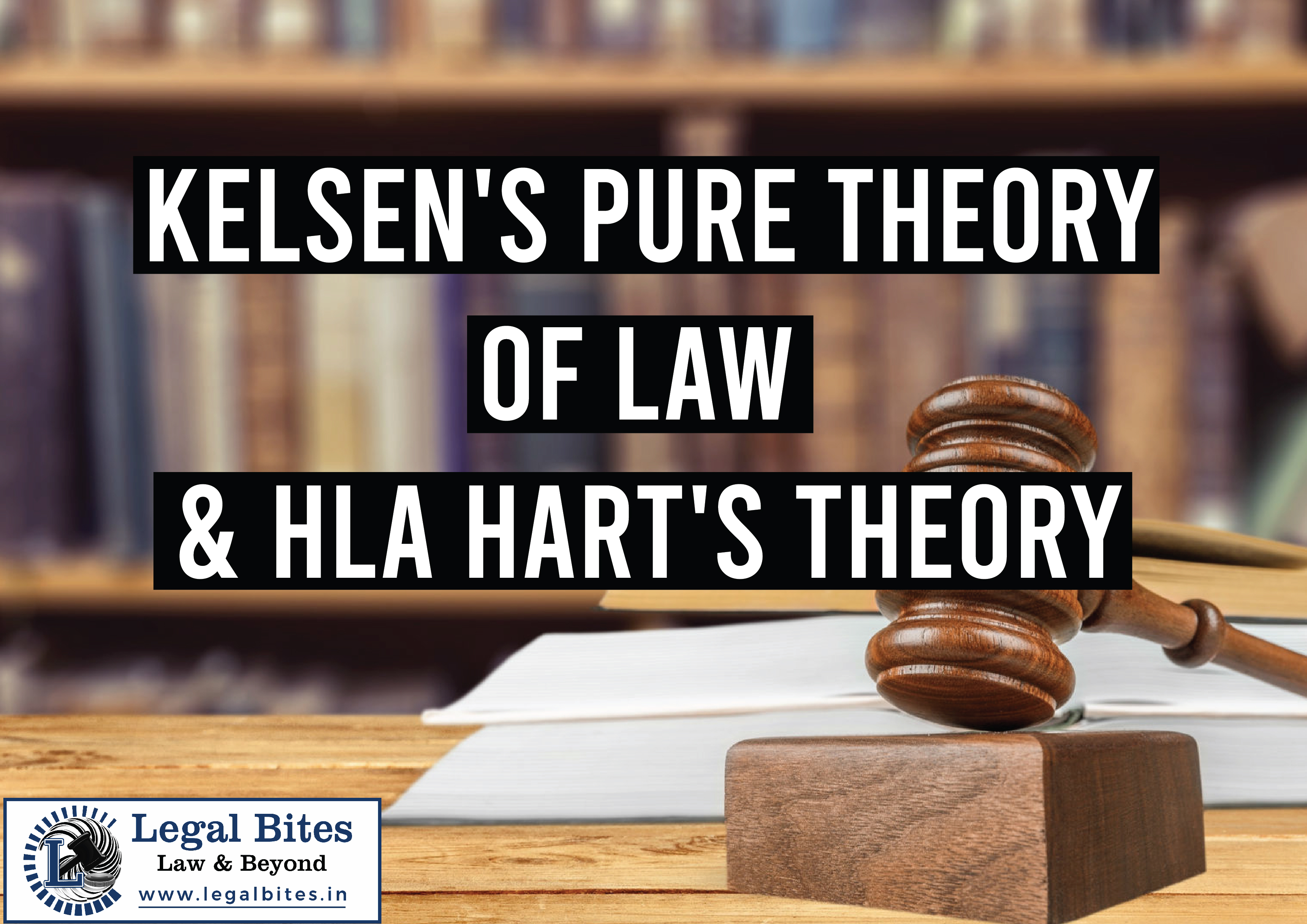 This article deals with Kelsen’s Pure Theory of Law & HLA Hart’s Theory. Kelsen distinguished between legal science and natural science on of “oughts”. He has strongly criticized Austin’s view of law as “command”.

With his Pure theory of law, Hans Kelsen did not wish to present any new ideology of law. Rather, his aim was to present law as it is, free from all the various ideologies. He wanted to examine law in its purest form. Kelsen’s pure theory can be said to be one of the most refined developments of analytical positivism.

Kelsen started his pure theory with certain premises. The same can be roughly summarized as follows:

Kelsen distinguished between legal science and natural science on the basis of “oughts”. According to him, legal science deals with what ought to have happened. For instance, in case of a murder, legal science would always speak of the punishment that must be given to the murder. It would always speak of what should be done according to the law. He further goes on to say that in every legal system there exists a hierarchy of such “oughts” which emerges from a single “ought” which is known as the Grundnorm. It is not necessary that the grundnorm is same in all the legal system. The concept, in general, is present in all the legal systems.

However, its contents may differ. The grundnorm is the backbone of the legal system. According to Kelsen, it is not necessary for every legal rule to stand on its own. One legal rule is a derivation from another legal rule. However, the grundnorm is an exception to this. It is a stand-alone rule from which other legal rules are derived. Kelsen further states that the grundnorm owes its existence to its popularity. A grundnorm must necessarily be willfully accepted by the people and must be followed by them. Once such a norm loses popular support, it ceases to exist as a grundnorm and another norm is deemed to be a grundnorm. Such a phenomenon is known as a revolution.

Critics have argued that with his grundnorm, Kelsen has failed to keep his theory of law ‘pure’. This is so because the concept of grundnorm rests on sociological aspects in so far as the requirement for popular support is concerned.

Implications of the Pure Theory

Kelsen arrived at the following conclusions from his idea of grundnorm:

Lord Lloyd has applauded the fact that Kelsen’s pure theory avoids some of the perplexities of Austin’s analytical positivism. However, he expresses concern over the uncertainty of the basic norm. It is difficult for the idea of basic norm to survive in the age of scientific behavioralism. Prof. Laski has stated, “granted its postulates, I believe the pure theory to be unanswerable, but….its substance is an exercise in logic not in life.”

H.L.A. Hart is generally regarded as the face of British Positivism. He has strongly criticized Austin’s view of law as “command”. He uses the concepts of “power” and “rule” to counter Austin’s analytical legal positivism. Prof. Hart has mainly studied law as a collection of legally binding rules.

Hart has identified the following three defects in primary rules:

Remedies for the Defects

According to Hart, the simplest remedy for the aforesaid defects is to introduce secondary rules for each one of them. The proposed remedies are as follows:

According to Hart, apart from external factors such as sanctions and societal pressure, the law also depends upon some internal factors. A law must be willfully obeyed by the people. They must consciously accept it and abide by it. Law must hold well from the internal point of view of the people. Officials must also internally recognize and consciously accept and abide by the various secondary rules. Such an internal aspect is an essential element to constitute a successful legal system.

Lord Lloyd has stated that Hart’s classification of primary and secondary rules is an extremely helpful tool in analyzing legal concepts. However, he expresses his doubts over the proposition that all legal rules can be classified as primary and secondary rules. He further goes on to express his concern over the uncertainty and immeasurability of Hart’s “internal aspect” of law. Prof. Ronald Dworkin criticizes Hart’s theory on the grounds that he recognizes only rules. He counters it with his concept of “principles”. Eckhoff has contended that Hart has confused the binding part of the law with the other aspects of law.

The theories of both, Kelsen and Hart, constitute essential aspects of the Analytical School of Jurisprudence. Though due to various reasons, both the theories might have lost their utility in contemporary times, they nevertheless continue to be used by various jurists and thinkers in their analysis and study of legal concepts.