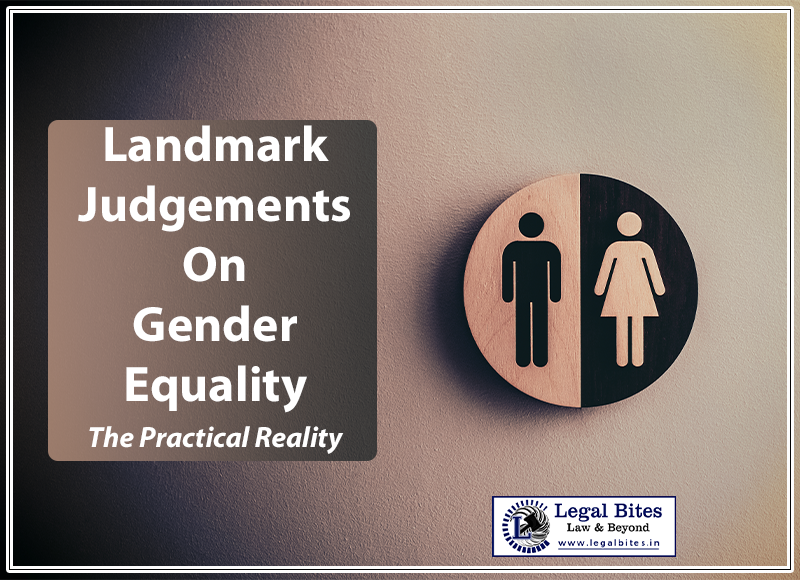 The judgements on gender equality discussed in this article provide an insight into the dynamic and forward-thinking approach of the judiciary which manifest their humanitarian outlook towards sensitive issues.

Constitution of India lays down exhaustive guidelines to make gender equality a reality in India. A country shall never be successful in its march towards progress if women are left behind. No wing other than judiciary could assist in making this de jure equality, a de facto one. Thus, throwing light on the practical judicial outlook towards women becomes important at this juncture. A few judgements which illustrate the approach of Indian judiciary towards the realisation of women’s rights have been discussed in this article.

As a part of her job, Bhanwari Devi attempted to terminate the marriage of an infant and to fight the male ego prevalent in rural Rajasthan. However, she failed and the marriage was successful. She was gang-raped by the five men who sought vengeance upon her courage to protest against them and the concept of child marriage. Police and doctors subjected her to inhuman treatment by not assisting her properly. She was helpless but still determined and hopeful. A writ petition was filed by an organisation named ‘Vishaka’. The PIL action sought guidelines for the elimination of sexual abuse at the workplace.

By a broad interpretation of the Constitution, it was held that sexual harassment was a clear violation of rights provided under Articles 14, 19 and 21. Relying on CEDAW, an international instrument to which India is a signatory, the court laid down the historic Vishaka Guidelines.

These directions were made binding on all of India as law and courts had to mandatorily follow them. These guidelines were later converted verbatim into The Sexual Harassment of Women at Workplace (Prevention, Prohibition & Redressal) Act, 2013 which is the most gifted piece of law acting as the saviour of working women.  This case is a remarkable example of judicial activism where the honourable court took appropriate measures for a healthy work environment.

In this gender-bending judgement by the Supreme Court, an inclusive reading of Article 14 was done and it was decided that employment cannot be denied to any person on the grounds of sex. For inflight services, stress was laid on high youth, appearance and glamour quotient of the employees.

A State-owned Aviation Company named ‘Air India’, by a service regulation, mandated the air hostesses to retire if they reach the age of 35, conceiving a child or on marriage, whichever occurs earlier. Such conditions were derogating the natural course of a woman’s life. These offending provisions were challenged and later struck down on grounds of arbitrariness and abhorrence in a civilised society.

Supreme Court was called out to test the validity of the regulations which enumerated the conditions of service of IFS officers, the Indian Foreign Service (Conduct and Discipline) Rules, 1961. Every female employee was bound by it to obtain permission from the public authorities and tender her resignation if her marriage was to be solemnized.

The government, which is the final deciding authority, shall determine if the future family commitments of the employee shall handicap her work efficiency or not. It was violative of the equality provisions vide Articles 15 and 16 of the Constitution.  The rule was reversed in totality by SC as it clearly dominated the weaker sex. It sent out a clear message against gender discriminatory conditions of work.

The issue-at-hand, in this case, pertained to the fact whether the obscene projection of women in beauty pageants is a violation of Fundamental Rights or not. The AP High Court was of the view that depriving a woman of her right to dignity and representing her in a light which degrades her, is against public morality. Such representation intrudes Article 14, 21 and 51A.

A PIL was filed before the Apex Court to provide clarity on provisions for the upliftment of prostitutes.

The two-judge bench of SC quoted the Fundamental Rights and deliberated that education and training be given to the fallen women and their children so that they may also lead a dignified life which they are worthy of. It was realised that they needed to be rescued, and ordered to set up a rehabilitative home for them. Society was called out to make amends and curb trafficking in women.

It was held in this case that any statute which makes special provisions for women to endorse social welfare, cannot be violative of rights enshrined in Part III. Court recognised the familial commitments of a woman by ordering that lady constables and waitresses not be allotted duties for the night shift. The government should work towards the creation of strong public opinion by advocacy, awareness and seminars to give women the spot they deserve.

This was the first case which involved a conviction for posting of denigratory messages under the IT Act, 2000. The issue was that a divorced woman snubbed a family friend who tried hard to woo her. After several attempts also, the woman was nowhere near to being convinced at which the man felt humiliated. This triggered him to the extent that he posted her number with obscene messages on public platforms, leading to her harassment.

The victim filed a complaint on the basis of evidence. The victim was convicted under Section 67 of the IT Act and other relevant sections of I.P.C. The accused was held guilty and punished accordingly. A benchmark was set and people were persuaded that the judiciary shall protect their rights if instances like this occur.

Through this decision, the court not only broadened the ambit of its powers by enforcing a provision that falls in the category of D.P.S.P. (which are not enforceable) but also constitutionalised the right to ‘equal pay for equal work’ (mentioned under Article 39-d).

It was held to be applicable to both men and women. The act of fixation of pay scale was declared void because of being based on unreasonable classification. This judgement was a turning point in the history of the Indian judiciary.

The Supreme Court noted that every woman has a right to make reproductive choices, i.e. to decide whether to carry pregnancy in full-term or to abort the foetus. She is free to participate in sexual activity or even refuse it. This decision added a new dimension of ‘bodily integrity’ to Article 21 of the Constitution.

The barbaric and gruesome Nirbhaya incident sparked a hue and cry for the need of the establishment of stricter rape laws in the country. The social outrage was ignited by the sexual violation and genital mutilation of an innocent girl. The Court was clear in stating that the crime committed by the accused was not deserving of any sympathy as it shook the conscience of the society.

The SC bench of three judges unanimously upheld death penalty of all the accused who exploited the victim’s identity and dignity. The crime touched the ‘rarest of rare’ threshold and is by far the worst our nation has ever seen. The judges went on to observe the following on the issue of women’s rights-

“Public at large, in particular men, are to be sensitized on gender justice. The battle for gender justice can be won only with strict implementation of legislative provisions, sensitization of public, taking other pro-active steps at all levels for combating violence against women and ensuring widespread attitudinal changes and comprehensive change in the existing mind set. We hope that this incident will pave the way for the same.” [10]

In light of increasing acid attacks and easy availability of acid, the Supreme Court was called out to issue directives for the prevention of such incidents by imposing restrictions on the sale of acids.

The Court instructed the governments, at both levels, to chalk out a plan and prohibit the unauthorised sale of acids across the nation. It also went ahead to declare that all victims shall be provided compensation and rehabilitation by the respective governments. This decision paved way for the legislature to introspect and enforce harsher punishments for offenders committing such horrendous crimes.

The inhuman Islamic practise of Talaq-e-biddat, wherein men could irrevocably divorce their wives by uttering the word ‘talaq’ thrice, was adjudged unconstitutional by a 5-judge bench of the Supreme Court.  This practice was derogatory to the dignity and equality of women as it violated Articles 14, 12, 21 and 25 of our Constitution.

CJI Khehar was of the view that no practise can be validated merely on the basis of the fact that it has been in existence for the longest time and that proper legislation against it must be put into place with immediate effect. This celebrated judgment emboldened the movement towards gender equality by its subtle indication of the religious dogma prevalent across several religions.

A Constitutional bench of SC, headed by CJI Dipak Misra, lifted the age-old ban on entry of women between the ages of 10-50, inside the Sabrimala temple where Lord Ayyappa is worshipped. The long-awaited judgement was pronounced amid protests in the state of Kerala. Devotion and faith must not be subjected to gender discrimination, as analysed by the honourable judges.

Stereotyping menstruating women in the present times would permit the religious patriarchy to flourish. The restriction on entry was a violation of the right to worship of woman, as assured by Articles 14 and 25 of the Constitution. This decision advanced gender justice and equality in the most significant manner.

The constitutional validity of Section 497 of I.P.C. was challenged in this PIL filed under Art.32. The section was argued to be gender discriminatory as it only criminalised adultery committed by men and not women. The concept of ‘gender-neutral’ laws was found to be absent in the aforementioned provision.

The Apex Court went ahead to decriminalise it as it was destroying the dignity of women. It was observed by the judges that such provisions which place a woman subordinate to a man, in marriage or otherwise, must be done away with in order to advance equality.

Achieving absolute gender justice in India is complicated because of the rigid traditions and diverse cultures. Poor enforcement of laws, deep-seated patriarchy, lack of financial dependence and awareness among women is to be accounted for the deplorable state of females in our society. Several NGOs, Human Rights advocates, UN and other governmental agencies have raised their voices against gender intolerance. Quite simply, equal treatment of all genders is a prerequisite for any welfare state.

The Indian judiciary, however, shapes the discourse of and keeps revising the gender justice theory based on norms accepted worldwide. The Courts have addressed all human rights violations and directed the government to act against it. The only recourse for them is to stay loyal to the Constitution and avoid judicial over activism. The Constitution encompasses the legal basis for establishing gender justice norms.

The flexible PIL system has exhibited positive results. Indian women have aced everything under the sun even after constantly being reminded that they are second to men. Despite the fact that there has been progress in the concretization of gender equity, there is still a long way to go.