Introduction Prior to the Hindu Marriage Act, 1955 marriage was regarded as indissoluble union of husband and wife. Manu has declared that a wife cannot be released from her husband either by sale or by abandonment, implying that the marital tie cannot be severed in any way. Therefore, the ancient Hindu Law does not recognise divorce. The present… Read More » 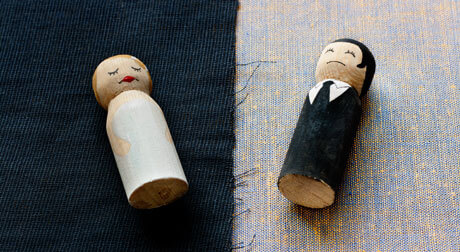 Introduction Prior to the Hindu Marriage Act, 1955 marriage was regarded as indissoluble union of husband and wife. Manu has declared that a wife cannot be released from her husband either by sale or by abandonment, implying that the marital tie cannot be severed in any way. Therefore, the ancient Hindu Law does not recognise divorce. The present Act i.e., has introduced vital and dynamic changes in the Hindu Law of Marriage and divorce. It has laid down clear provisions regarding Divorce...

Prior to the Hindu Marriage Act, 1955 marriage was regarded as indissoluble union of husband and wife. Manu has declared that a wife cannot be released from her husband either by sale or by abandonment, implying that the marital tie cannot be severed in any way. Therefore, the ancient Hindu Law does not recognise divorce.

The present Act i.e., has introduced vital and dynamic changes in the Hindu Law of Marriage and divorce. It has laid down clear provisions regarding Divorce under certain circumstances. Divorce is laid down under sections 13, 13-B, 14 and 15 of the Act. Section 13 deals with the circumstances in which the right to divorce accrues. Section 14 limits the right to obtain a divorce by laying down that divorce petition may not be made within one year of the date of marriage except when the case is of exceptional hardship to the petitioner or of exceptional depravity on the part of the respondent. Section 15 lays down the limitations on the right of divorced persons to marry again

(1) Divorce at Will theory

This theory is not recognized under the Hindu Law. According to this theory one can divorce one’s spouse anytime when that person wants to do so. This is a very well-known theory in Muslim Law

If the marriage is being frustrated without there being any marital offence where one of the spouses is suffering from any physical ailment or mental unsoundness of mind, or changed his religion or has renounced the world or has disappeared for a very long period. In such a case the other spouse should be free to put an end to the marriage by getting divorce. The grounds mentioned in this theory has been supported by the HINDU MARREAGE ACT, 1955 as the valid grounds of seeking divorce.

(3) Offence or Guilt or Fault Theory

According to this theory, the spouse can seek the divorce from the other spouse if he or she is found in fault of committing a matrimonial offence. The expression matrimonial offence, includes (1) adultery (2) desertion (3) cruelty (4) Rape (5) sodomy (6) Bestiality (7) Refusal to obey court’s order to pay maintenance to the wife (8) Marrying an underage person. This implies that there should be personal injury to the marital relations of the spouses. This theory implies that one party is guilty and the other is innocent. But if the aggrieved party condones the act of the guilty party, no divorce can be granted.

According to the English Law of Doctrine of Recrimination, if both the parties independent of one another have committed matrimonial offence the marriage should not be dissolved. The guilt theory is criticized on the basis that it recognizes divorce only on certain (above mentioned) grounds. Some more grounds are recognized which led to the renaming of guilt theory as fault theory. The grounds like insanity and epilepsy are added to the list. Thus, if one of the parties has some fault in him or her, marriage could be dissolved whether that fault is his or her deliberate or unintentional act.

Further, the Marriage Laws (Amendment) Act, 1976 has made a radical amendment and grounds of divorce are increased and some special grounds for divorce are given to the wife.

Divorce by mutual consent means that the case is not like usual ones wherein one party petitions against the other for divorce and the other party resists the same. Here both the parties make a joint petition to the court for divorce between them. They genuinely desire to get rid of each other and they part amicably for good. If divorce is not given their life would be spoiled and it would result in moral degradation. If divorce by mutual consent is given the parties will not wash their dirty linen in public.

There are unfounded objections against this type of divorce that consent of the unwilling party would be obtained by force, fraud or some other contrivance, and this is a divorce by collusion. But both these arguments and doubts are unfounded. Every collusion is no doubt by consent but every consent does not mean collusion. Collusion is a secret agreement for a fraudulent purpose, it is a secret agreement by two or more persons to obtain an unlawful object. Collusion is different from compulsion. Compulsion occurs when one party can dominate the will of the other.

A marriage is a union of husband and wife for the whole life, but it may happen that their relations might be strained and they would like to live away from each other. It is to be remembered that owing to their sexual relations, interdependence and social censure it is difficult for them to live without each other for a long time. Therefore there must be some stronger reason for them to live apart and get divorce. There should be complete absence of emotional attachment between them and there must develop intense hatred and acrimony between them, so much so, that their marriage is only in name, a dead one or like a shell sans substance. It is now beyond the hope of salvage. It is therefore an irretrievable breakdown of marriage.

The breakdown of marriage is defined as “such failure in the matrimonial relationship or circumstances so adverse to that relation that no reasonable probability remains for the spouses to live together as husband and wife.” If a marriage has broken down beyond all possibilities of repair, then it should be brought to an end, without looking into the causes of breakdown and without fixing any responsibility on either party. Such marriage should be dissolved, even if one of the parties to the marriage does not desire it. The empty shell is to be destroyed with the maximum fairness and minimum bitterness, distress and humiliation.

In Yousuf v. Sowramina, the learned judge said, “While there is no rose which has no thorns but if what you hold is all thorn and no rose, better throw it away. The ground for divorce is not conjugal guilt but breakdown of marriage.” In some countries, grounds like “incompatibility of temperament”, “profound and lasting disruption”, etc. have been added which helped in claiming divorce under the breakdown theory. Sometimes the determination of the question whether in fact a marriage has broken down or not is left to the courts. At other times, the legislature lays down the criterion of breakdown of a marriage and if that is established, the courts have no option but to dissolve the marriage.

The Law Commission of India in its Seventy first Report (Reforms of the Grounds for Divorce) has said that it is good to give a de jure recognition to what exists de facto. It is not a relevant consideration to for granting divorce on the ground of irretrievable breakdown as to which the party played the villains role leading to such breakdown. Hence, section 23 (1) (a) will not apply to such a petition.

The Jorden Diengdeh case is the first case wherein the Supreme Court made recommendations to make irretrievable breakdown of marriage as a ground for divorce. From this case upto Naveen Kohli case, in a number of cases such recommendations was reiterated.

Therefore, granting of divorce under this theory totally depends upon the circumstances and the relationship between the two spouses.