This article titled ‘Death, Marriage and Insolvency of Parties: Order 22’ is written by Devanjali Banerjee and discusses the provisions under Order 22 that discuss the effects of deaths, marriage or insolvencies on a suit. I. Introduction The stages in a civil suit should ideally proceed smoothly from the institution of a suit to the delivery of the judgment… Read More » 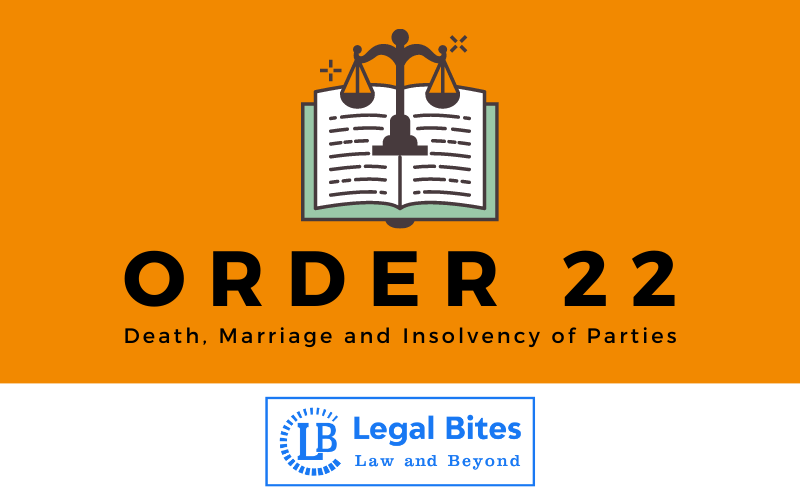 This article titled ‘Death, Marriage and Insolvency of Parties: Order 22’ is written by Devanjali Banerjee and discusses the provisions under Order 22 that discuss the effects of deaths, marriage or insolvencies on a suit. I. Introduction The stages in a civil suit should ideally proceed smoothly from the institution of a suit to the delivery of the judgment and decree by courts. However, reality does not reflect such a timely disposition of civil suits in India. According to...

This article titled ‘Death, Marriage and Insolvency of Parties: Order 22’ is written by Devanjali Banerjee and discusses the provisions under Order 22 that discuss the effects of deaths, marriage or insolvencies on a suit.

The stages in a civil suit should ideally proceed smoothly from the institution of a suit to the delivery of the judgment and decree by courts. However, reality does not reflect such a timely disposition of civil suits in India. According to a study by DAKSH, civil suits take up to four years to be disposed of in courts in the country.[1]

Thus, the longer periods for case disposal and the relatively large number of parties to suits, mean that there would be ample opportunity for deaths, marriage and even insolvency of such parties to occur between the institution of suits to their final disposal.

Order 22 of the Code of Civil Procedure, 1908 (‘the Code’) sets out the appropriate procedures required where there is death, marriage and insolvency of parties (in case of both plaintiffs and defendants). It also affords clarity to the question of the appropriate response to any changes brought about by the occurrence of such contingent events during the pendency of a suit.

According to the Supreme Court (‘SC’), the object of the provisions provided in Order 22 was crafted to “…ensure continuation …of suits into an effective adjudication” and not to hinder the progress of the proceedings. In the view of the SC, “…distinctive and independent rights to property or any claim remain intact and not lost forever due to death of one or the other, in the proceedings.”[2]

The abatement of a suit in civil procedure refers to when a civil suit becomes redundant due to any person ceasing to exist as a party. Abatement applies in the case of both the plaintiff and the defendant. However, the mere death of a plaintiff or defendant shall not cause the suit to abate if the right to sue survives.[3]

The claimants appealed to the High Court, and appeals continued up to the SC, at which point one of the claimants died- yet the state government omitted to make the legal representatives of the deceased claimant, parties to the appeal filed by the deceased.

In the instant case, the SC dismissed the appeals made by the claimants before it and rejected the contention that the state government’s suit was abated due to the legal representatives of the claimant not being added as parties. In the view of the Court, a decree against a dead person cannot be treated as a nullity because the appellate court is still permitted to bring the legal representatives of the deceased claimant on record.

Thus, it was held that the right to sue does not get extinguished simply because no application has been made to bring the legal representatives of the claimant on record to the suit/appeal.

Type of claims and right to sue

However, if the entire claim in a suit is based on a contract, then the suit must proceed in its entirety.[7] The right to sue must be in accordance with O.22 Rule 1, and in most cases right to sue survives, except in suits based on damages for defamation or assault or after the death of the party, when granting the relief would defeat the purpose.[8]

2. Procedure where one of several plaintiffs or defendants dies and Right to Sue survives [O.22 Rule 2]

As illustrated above in the N. Jayaram Reddi case,[11] the survival of the right to sue and the discretion of the surviving parties to continue with the suit is the critical component here. This was emphasized by Justice Shingal in that case, when he stated that it is the discretion of the legal representative to question whether the decree was a nullity or fight the appeal on merits. [12]

In both these rules, in the event of such contingency arising, an application must be made [either under Rule 3(1) or under Rule 4(1)]to bring the legal representative of the deceased on the record within 90 days[13] from the date of death of deceased.

In case such application is not made in either case, the suit will abate. In fact, in case no application is made, the suit would abate without any order of the court.[14] This is because abatement does not require any adjudication or declaration by courts- it occurs by operation of the law itself.[15]

In the case of Rule 3, when the suit stands abated, the defendant can on application to the court, be awarded costs incurred in defence of the suit, to be received from the estate of the deceased plaintiff.[16]

In the case of Rule 4, there is a discretionary provision for the Court to exempt the plaintiff from substituting the legal representative of a defendant in case the latter has not filed his written statement or failed to appear or contest at his hearing. In case the aforementioned scenarios arise, judgment may be pronounced against the defendant, regardless of the fact of his/her death.[17]

4. Determination of question as to legal representative [Rules 4A and 5]

In case of no legal representative available, Rule 4A sets out that the Court may proceed without any person representing the estate of the deceased person or may appoint the Administrator-General or other court officer as such representative.[20] The ensuing judgment or order pronounced by the court would be binding upon the estate of the deceased person. [21]

In case of a question arising as to whether a particular person is or is not the legal representative of a deceased plaintiff or defendant, the court is mandated to determine the same.[22] However, in case such a question comes up before an Appellate Court, it may direct a subordinate court to try the question and take the findings into consideration while determining the question.[23]

5. No abatement by reason of death before hearing [Order 22 Rule 6]

This provision mandates that there will be no abatement by reason of the death of either party between the conclusion of the hearing and the pronouncing of the judgment- but judgment is to be pronounced regardless of the fact of death and would have the same force as if it had been delivered prior to the occurrence of said death.[24]

This Rule operates whether the cause of action survives (and not the right to sue) survives the death of the deceased plaintiff or defendant or not. [25]

Rule 7 deals with the procedure to be followed in case of marriage of the female party (plaintiff or defendant) and states that the marriage of a female party shall not cause a civil suit to abate.[26] The civil proceedings may continue till judgment and if the decree is against a female defendant, it may be executed against her alone.[27]

The provision also states that where the husband of the female party is by law, liable for the debts of his wife then a decree may be executed against the husband as well, with permission of the court.[28]

In case of a judgment in favour of the wife, the husband may make an application for permission before the court for the execution of the decree. However, this is provided that the husband is entitled to the subject matter of the decree. [29]

The insolvency of the plaintiff does not mean per se, that the suit would abate, but this is provided that the assignee or receiver appointed continues the suit, or gives security for costs within the time ordered.[30] The Court, however, may assign a special reason for such abatement.[31]

Rule 8(2) sets out the procedure to be followed when the assignee does not continue the suit or give security as directed.[32] In this case, the defendant may apply to the court that the suit be dismissed due to the plaintiff’s insolvency. This provision grants discretionary power to the Court to issue an order dismissing the suit, and awarding costs borne in defending the suit, to the defendant to be drawn out from the plaintiff’s estate as debt.

Devolution of interest refers to the creation and assignment of an interest in a claim. Rule 10 lays out the procedure for assignment of interest during the pendency of the suit, before the final order is delivered.[33]

The provision states that the creation of such interest (assignment, creation or devolution of any interest) can proceed with the leave of the court, which is in its discretion to provide or not.

Rule 10(2) applies in cases where there has been an attachment of a decree and said attachment is being appealed.[34] In such cases, the attachment will be deemed to be an interest in itself- entitling any person who has been assigned such an interest in compliance with Rule 10(1).

Order 22 sets out the various procedures and actions to be taken when there is a death, insolvency or marriage of any of the parties in the pendency of a suit. The above article has outlined the provisions of the same and provided case law.