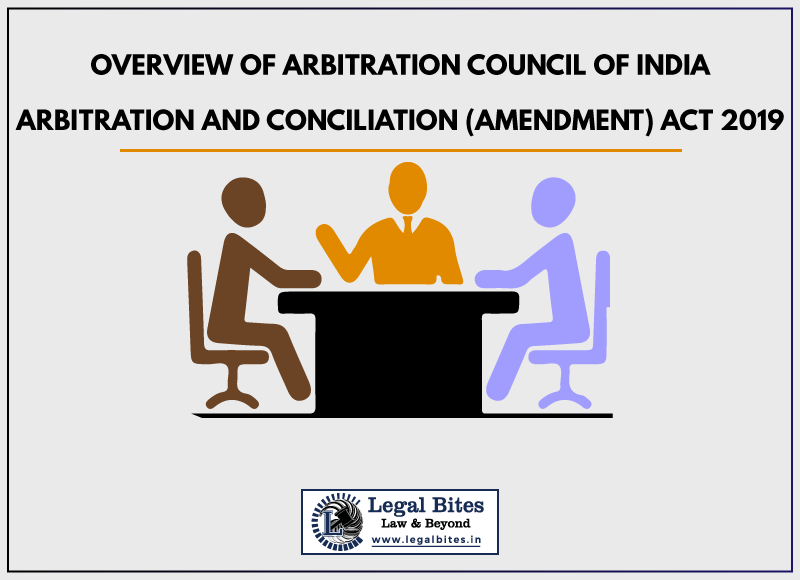 This article titled ‘An Overview of The Arbitration Council Of India In The Light Of The Arbitration And Conciliation (Amendment) Act Of 2019’ has been written by Jahnavi Taneja & Abhayy Pandit.

A glimpse of The Arbitration And Conciliation (Amendment) Act of 2019

On July 15th, 2019 – Mr Ravi Shankar Prasad on behalf of the Ministry of Law and Justice introduced the Arbitration and Conciliation (Amendment) Bill 2019 in the Rajya Sabha (Upper House). The said Bill was passed by the Upper House on July 18th, 2019 and subsequently by the Lok Sabha (Lower House) on August 1st, 2019. The said Bill acquired the status of an Act post receiving the assent of the President of India on August 9th, 2019 – amending the Act of 1996, the Arbitration and Conciliation (Amendment) Act of 2019 was brought in operation.

The Amendment Act of 2019 majorly got praise and popularity because of the introduction of the establishment of Arbitration Council of India under Part I-A (Sections 43A-M) of the amended act along with other new features like confidentiality of proceedings, relaxation of time limits, time-bound completion of written submissions, and according to clarity that the applicability of Arbitration and Conciliation (Amendment) Act of 2015 shall only be applicable on the arbitral proceedings which started on or after October 23rd, 2015.

The Report of the “High-Level Committee to Review the Institutionalisation of Arbitration Mechanism in India” chaired by Justice Srikrishna (Former Judge, Supreme Court of India) proved to be a significant report rendered by the High-Level Committee and majorly weighed in the 2019 Amendment to the ACA of 1996. This High-Level Committee had the mandate of establishment by the Ministry of Law and Justice via their January 13th, 2017 order. The Committee met for seven elaborate committee sessions and included: Eight Members + 1 Member Secretary + Chairman of the Committee

The Committee submitted its report to the Government of India on 30th July 2017 and expressed gratitude towards 25 persons who made their valuable contributions to the report – the persons were of the likes of Justice Muralidhar (Judge, High Court of Delhi), Arvind P. Datar (Senior Advocate), Aniruddha Rajput (Member, International Law Commission) and also thanked the three-membered team from Vidhi Centre for Legal Policy, New Delhi for their legal research and drafting assistance to the High-Level Committee.

The main objective to draft this report was succinctly put as:

It was in this context that the High-Level Committee (“Committee”) was set up to identify the roadblocks to the development of institutional arbitration, examine specific issues affecting the Indian arbitration landscape, and prepare a roadmap for making India a robust centre for international and domestic arbitration.” (High-Level Committee Report, 2017, p.3)

The Report is structured to have three parts – only Part I pertains to the recommendation of setting up an Arbitration Council of India, the gist of the structure of the report was explained as such:

“In Part I of this report, the Committee recommends the strengthening of institutional arbitration in India through measures such as the grading of arbitral institutions, the accreditation of arbitrators, the creation of a specialist arbitration bar and bench, and the provision of governmental and legislative support for institutional arbitration. The Committee also recommends further amendments to the ACA to clear ambiguities in the legislation and promote the use of India as a seat of arbitration. Part II pertains to the ICADR (International Centre for ADR) and Part III pertains to the BIT (Bilateral Investment Treaty) arbitrations concerning the Union of India.” (High-Level Committee Report, 2017, p.3)

Arbitration Council of India seeks to be the first independent government body for the promotion of all means of alternate dispute resolution mechanisms (ADR) as an “arbitral institution” – arbitration, conciliation, mediation, negotiation etc. The provisions related to the ACI are under Part I-A – which includes thirteen provisions from Sections 43A to 43M of the amended Act of 2019.

Section 43A acts as the definition clause for the newly added Part-I, providing definitions for “chairperson”, “council” and “member”. Section 43B lays down the provisions related to the nature of ACI’s establishment which in accordance with the text of the provision shall have the status of a “body corporate” i.e. it will be bestowed with characteristics like perpetual succession, common seal, acquire/hold/dispose of property, power to enter into a contract and to sue or be sued.

The provision also lays down that ACI’s formation shall be notified by the Official Gazette and its headquarters are to be situated in New Delhi – however, ACI on prior permission from the Central Government may be allowed to establish offices at other places in India.

Section 43C gives the composition of the council (refer chart below) – along with the composition (which shall be of 7 in toto), this section also lays down the qualification criteria of all the members of the ACI. All members (except the ex-officio members) are supposed to have substantial knowledge and experience (be it of research, teaching or practical) in the field of Arbitration.

The functions of the ACI include the framing of the policies to govern the grading of arbitral institutions; to provide for standards for accreditation of arbitrators; hold training, workshops and courses in the arena of arbitration; maintain a depository of domestic arbitral awards; make recommendations to the Central Government regarding personnel training and infrastructure of the arbitration institutions amongst others and perform such other functions as may be decided by the Central Government.

Section 43E states that any vacancy or defect in composition or any irregularity in the procedure shall not affect the merits of the proceedings i.e. shall not invalidate the proceedings of the Council. Section 43F lays down that any member or even Chairperson of the Council may resign office by handing in a written notice but may be instructed to serve for three months after receipt of notice or till the appointment of a successor, whichever is earlier.

Section 43G gives the grounds of removal of a member from his office – if he becomes undischarged insolvent, gets any paid employment during his tenure, convicted of an offence involving moral turpitude, has financial or other interest that prejudices his role as a member, has abused the power of his position prejudicial to public interest or has become physically or mentally incapable of acting as a Member.

Section 43H says that the Council may appoint such experts and committees as it deems fit to fulfill the functions of the Council. Section 43I states that the Council must formulate grading norms by including infrastructure, quality and calibre of arbitrators, performance and compliance of time limits, etc. in the criteria for such grading system. Section 43J states that such norms for the accreditation of the arbitrators shall include norms as per qualifications and experience – that shall be specified in the Eighth Schedule to the Act.

Section 43K provides that a digital repository of domestic arbitral awards shall be maintained by the Council. Section 43L gives the Council the power to make regulations consistent with the provisions of this Act to discharge the functions and duties bestowed upon it. Section 43M entitled “Chief Executive Officer” lays down that the CEO shall be responsible for the day-to-day administration of the Council; the CEO shall be appointed by the Central Government; he shall discharge duties and functions consistent with the regulations, and he shall be assisted by a Secretariat that shall have officers and employees as prescribed by the Central Government.