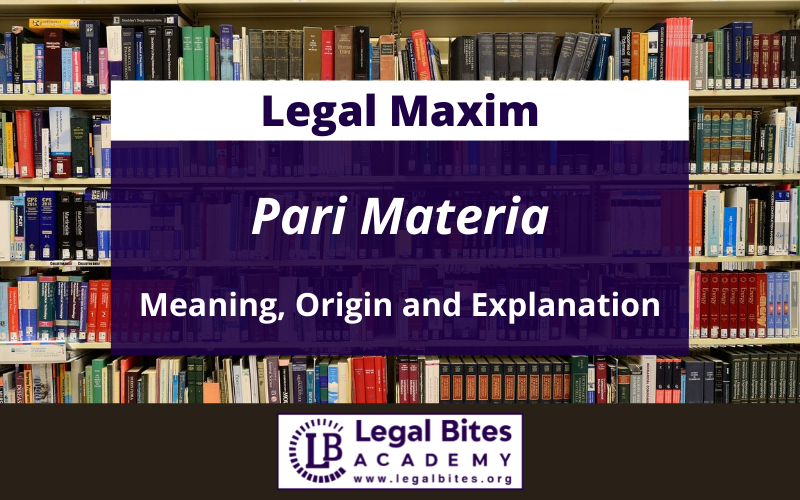 This article titled ‘Pari Materia: Origin, Meaning and Explanation’ is written by Sahajpreet Bhusari and discusses the legal maxim of Pari Materia.

Pari Materia is a legal maxim of Latin origin. In Latin, the maxim literally translates to ‘of/on the same subject matter’[1].

The theory of Pari Materia is a valuable tool for interpreting the legislation that has the same goal in mind. When there is ambiguity concerning the meaning of a statute’s terms, it is customary to interpret them in the way that best harmonises with the topic of the enactment and the aim that the legislator has in mind.

The theory aids in the alignment of the law’s goal and topic. In statutory construction, it is a rule that in pari materia legislation must be considered jointly.

As a result of this theory, any laws relating to labour regulation or taxes, among other things, can be used to interpret laws of the same type. There have been instances in which the Court has applied the concept to determine the meaning of terms that are not defined in the Act in question.

When a term is also not defined in the Act, it’s permitted to consult dictionaries or other comparable laws to figure out what that word means.

Nonetheless, while choosing between the different meanings of a term, the contextual background should always be considered, since it is a basic rule that the meaning of the words and phrases used in an Act must acquire their colour from the context in which they occur.

When taking into consideration the pari materia provisions of the Central Excises and Salt Acts in the case of J.K. Steel Ltd. v. Union of India and Ors[2], the Supreme Court declared whatsoever acts that are in pari materia must be treated together as crafting a single code and evaluating and implementing each other.