Home  »  Civil Laws US   »   Patents in the USA: Meaning and Provisions 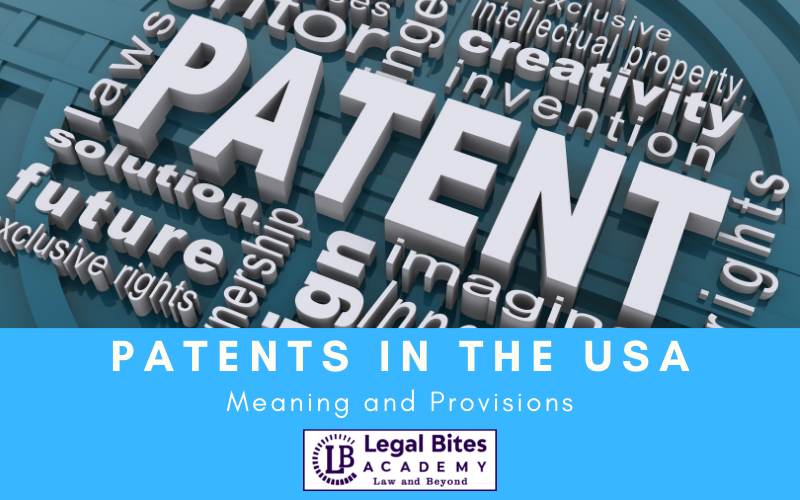 I. What is a Patent?

Exclusive right – the patent holder gets a right to exploit the use of the invention by making money by selling, using or distributing it and no other person can do the same without his permission.

In the US the constitution has given the power to congress to do all such acts that are necessary for promoting the science and useful arts under Article I Section 8 Clause 8.

Using this power, the first law for protecting patents was passed in the year 1790. A revision was made to this law in 1953 and the same was incorporated in the Title 35 of the US Code. In the year 1999, Congress also passed American Investors Protection Act and again the law was amended.

III. What can or cannot be patented?

Section 101 of the Code explains the patentable inventions. In the US, the invention definition also includes discovery. It is anything new and useful. It should be a process, machine, composition or manufacture.

Further Section 102 provides for what cannot be patented:

Now it is also explained what does not constitute prior art if any disclosure is made in the time within one year or less than that before the application date if such statement is made by the inventor himself or in case of joint ownership of the patent, joint owners or anyone who has got the invention from the inventors.

Apart from novelty, Section 103 provides that the invention to be patentable must be non-obvious, which means that the person who would be having the technical know-how would not have thought of such invention. This poses as a test to determine the difference between the prior art and the invention which has to be registered.

If in such invention any biotechnological process involving alteration of the cells of an organism is used and a completely new composition is made out of it, it is called non-obvious only if it becomes the part of the application of that invention or separate application is filed for that on the same day as the invention application.

It is also rendered non-obvious if the same person has invented both the new invention and the new composition caused while making the former. Such composition could have also been assigned to the inventor to make it non-obvious.

In the case of Bilski v. Kappos, 561 U.S. 593, the patent was filed by the petitioner for the method that they developed to determine the risk for the buyers and sellers due to price changes in the commodity markets. They made some steps to lower the risk and came up with a mathematical formula to solve a mathematical problem.

The patent was rejected, it being an abstract idea and the Appeal Board also upheld the same. The Supreme Court also affirmed the same. When the invention is the process, it must be tied to some machine or apparatus or transformed into some state or a thing. The laws of nature, physical phenomenon and abstract ideas are non-patentable.

Section 111 provides for the steps of the Registration Application. A written application has to be submitted to the Director with the appropriate fee.

The most important right of the priority. Section 119 of the 35 US Code. If the person has filed for a patent before the application in some other country which is a member of the convention or treaties the US member of, the person can enjoy the priority date and the date of the previous application will be considered while giving him the patent if such application was made within 12 months because otherwise, it will constitute public use for more than one year which is not patentable.

The inventor in this case has to give the details of the previous filing and the record of the authorities to claim the priority date. If the priority is not claimed, it can be considered as waived off by the inventor. If many separate inventions are claimed from one application, the director can ask to file divisional i.e. separate applications, but the inventor can use the filing date same as that of an original application under Section 121.

An appeal can be made after 2 rejections to the Board of Patent Appeals and Interferences. Interference is when the application is such that it interferes with the patent right of the already existing patent or with an application that is already pending.

The patent right can be transferred by license or assignment. Whoever makes, uses, sells or offer to sell the invention or the main part especially required for the patent to work without the consent of the inventor acts in an illegal manner. The defence against infringement is the prior use. He must show that he has been using it commercially even before the invention and such use was at least before 1 year from the application date or publication date as per Section 273 of the Code.

There are remedies available in the 35 US Code against the infringement and Section 281 provides for the civil remedies. The burden of proof regarding proving that there is no obviousness or newness in the patent is on the person who says so. The patent is presumed to be a valid patent.

Sections 283 to 285 provide for the kinds of remedies. The remedy of injunction can be claimed to bring a stay on the violating acts, damages can be claimed to compensate the inventor along with interest and costs and the court can also award the fees that the inventor had to spend because of infringement. The limitation to file a complaint is 6 years.

In one case of eBay Inc. v. MercExchange, L.L.C. – 547 U.S. 388, eBay, a website let the other brands put their products on their website to auction. Half.com was a wholly-owned subsidiary of e-bay and undertook the operation of a similar website. MercExchange wanted to license their patent to both of them but they didn’t reach an agreement. MercExchange filed a suit for permanent injunction for infringement of their patent.

District Court upheld the infringement but after the decision of the jury, it was denied. The Court of Appeals gave the opposite decision. It was held that a permanent injunction was appropriate. However, Supreme Court again reversed this decision.

The test to be fulfilled should be –

The decision of injunction must be done using the principles of equity.

In this way, the USA follows the aforementioned legal provisions when dealing with the patents for the economic benefit and overall social progress of the nation and the world.

1. Origins and Scope of the Power, Available Here.