Home  »  Criminal Procedure   »   Persons Entitled To Claim Maintenance Under Section 125 Of The Cr.P.C 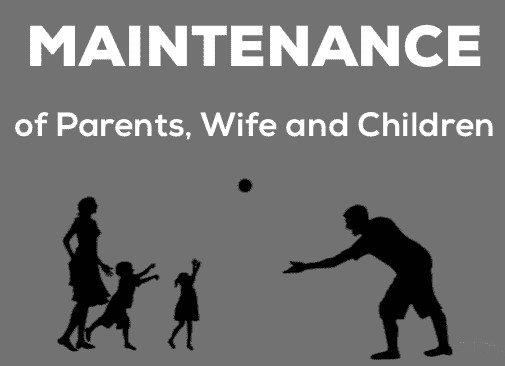 Persons Entitled To Claim Maintenance Under Section 125 Of The Cr.P.C | Overview

The essay discusses the Persons Entitled To Claim Maintenance Under Section 125 Of The Cr.P.C. Section 125 to 128 of the Code of Criminal Procedure, 1973 provide for “speedy, effective and rather inexpensive remedy” to certain persons who are specifically entitled to claim maintenance under these provisions. The subject matter of these provisions technically deal with family matters and therefore, it is in the nature of a civil dispute.

Nevertheless, the rationale for imbibing these provisions into Cr.P.C is to accord an accelerated and economical remedy than that is available in civil courts. The Supreme Court in Bhagwan Dutt v. Kamla Devi justified the presence of Section 125 under Cr.P.C by stating that “these provisions are aimed at preventing starvation and vagrancy leading to the commission of the crime” [1].

Applicability of the Provisions

The provisions entailed under Sections 125 to 128 of the Code are applicable to all persons irrespective of their religions and runs parallel to the personal laws of the parties. It means that even if a personal law has specific and detailed provision for maintenance, it cannot make the provision under Cr.P.C inapplicable. In Nanak Chandra v. Chandra Kishore Aggarwal, the apex held that “sections 125 to 128 have no relationship with the personal law of the parties” [2].

The application of these provisions went through a great deal of turmoil during 1985 when the apex court decided the landmark case of Md. Ahmed Khan v. Shah Bano Begum[3]. The court, in this case, granted the maintenance to the respondent-wife who belonged to Islam where it is believed that no maintenance needs to be paid to the wife since the husband pays dower (reverse of dowry) at the time of marriage.

The controversy led to the enactment of Muslim Women (Protection of Rights on Divorce) Act, 1986 to reverse the effect of the judgment in Shah Bano. However, in Daniel Latifi v. Union of India[4], the apex court once again upheld its decision in Shah Bano and the applicability of the Act was held independent of Section 125.

Under certain circumstances mentioned under Section 125, a person is required to pay maintenance to the following persons:

In Anupama Pradhan v. Sultan Pradhan[6], the court laid three criteria to determine the status of husband-wife. First, the persons claiming to be husband and wife must have lived as spouses for a considerable period of time. Second, it should be in the knowledge of the public that they live together as husband and wife and third, the parties must have been married according to their personal laws.

With respect to the condition of living together for a certain period and with knowledge of the public, the burden is on the wife to prove that they have been living together as husband and wife before their separation. Further, explanation (b) to Section 125 (1) provides that a “the term wife also includes a divorced woman”. A woman cannot be divorced unless she was a legally wedded wife of the man. Thus, the right to maintenance has been extended to a divorced woman as well.

Now, with respect to the validity of a marriage, it always depends upon the rituals and culture and the personal laws applicable on the parties to decide whether the marriage was valid or not[7]. For instance, in Naresh Chandra v. Reshma Bai[8], the court observed that a “marriage by an exchange of garlands is invalid” since the parties were Hindu.

The definition of “wife” has been expanded by the courts to meet the changing paradigms of society. In a modern society where parties are involved in a live-in relationship, several instances have been witnessed where on the promise to marry, the man deceives the woman to live with him and maintain a physical relationship. Now, in the case of live-in relationship, the parties live like husband and wife and to the knowledge of the public (in most of the cases) but are not legally married.

Thus, this question arose before the Hon’ble Supreme Court in D. Velusamy v. D. Patchaiammal[11] and Chunmuniya v. Virender Kushwaha [12]in 2010 and 2011 respectively. The court, in both cases, held that “a woman who was in a marriage-like relationship, though not a legally wedded wife under Section 125 could claim maintenance under the Cr.P.C and the Protection against Domestic Violence Act”.

The provision uses the term “his father or mother” which implies that the duty is bestowed upon the son to maintain his parents. However, the Kerala High Court, in Areefa Beevi v. K.M. Sahib[13] analysed the section and stated that “the expression his father or mother must be taken as to have the meaning her father and mother as well”.

Now, the next most significant issue raised with respect to this provision is whether the terms “father” and “mother” include “adoptive father or mother” and “stepfather or stepmother”. According to Section 3 (20) of the General Clauses Act, 1897, “father shall include an ‘adoptive father’”, but, however, “mother” has not been defined to include the adoptive mother. In such a situation, the Bombay High Court used its interpretative power and held that “mother” shall include “adoptive mother” as well[14].

Now, when it comes to stepmother or stepfather, the High Courts of Bombay, and Gujarat have the same opinion. In Ramabai v. Dinesh [15]and Havaben v. Razakbhai[16], these courts observed that “having regard to the object and intention of Section 125, the term “mother” will have its natural meaning and will not include stepmother”. The Supreme Court, on the other hand, though agreed with the conclusions of the High Courts, yet it further opined that “a childless stepmother may claim maintenance from her stepson provided she is a widow or her husband, if living, is also incapable of maintaining her”. The court further added that a stepmother also cannot claim maintenance if she has her own natural-born sons or daughters.

The provision is mandatory in nature and the person can approach a competent Magistrate to deal with the issue. It is also very important to note that an earlier maximum amount of maintenance allowed was Rs. 500/- in total which was done away by the 2001 amendment and it is now at the discretion of the Magistrate to decide the sum of compensation.