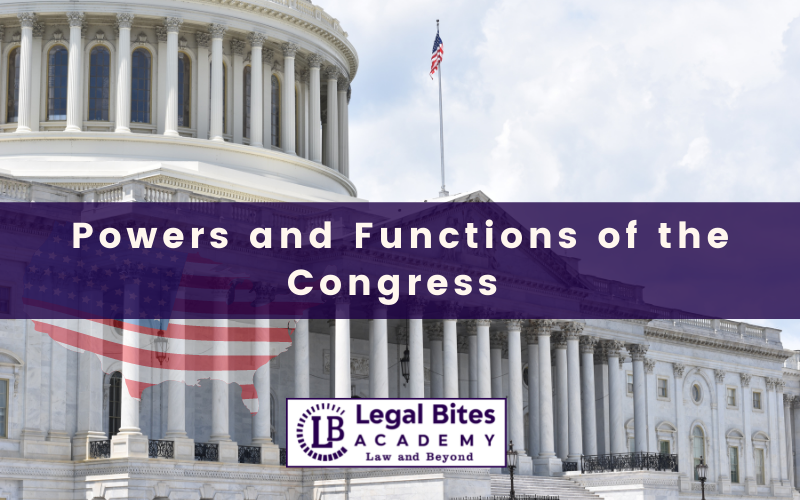 The powers and functions of the Congress (House of Representatives and Senate) are enumerated under US Constitution to facilitate the governance in the country. The Constitution specifically grants Congress its most important power the authority to make laws. A bill, or proposed law, only becomes law after both the House of Representatives and the Senate have approved it in the same form.

The two houses share other powers, many of which are listed in Article I, Section 8. Congress has implied powers deriving from the Constitution’s Necessary and Proper Clause which permit Congress to “make all laws which shall be necessary and proper for carrying into execution the foregoing powers, and all other powers vested by this Constitution in the government of the United States, or in any department or officer thereof.”

Broad interpretations of this clause and of the Commerce Clause, the enumerated power to regulate commerce, in rulings such as McCulloch v. Maryland[1] have effectively widened the scope of Congress’s legislative authority far beyond that prescribed in Section 8.

Powers of House of Representative

The Constitution lists powers that are denied to Congress (Article I, Section 9). The Bill of Rights prohibits Congress from making laws that limit individual liberties. Under the system of checks and balances, the president can veto a law passed by Congress, or the Supreme Court can declare a law unconstitutional. Voters can ignore unpopular laws and press for their repeal, as happened with the Eighteenth Amendment establishing Prohibition.

Functions of the Congress

One of the important functions of the Congress is making of law. If there were one principle the Founders wanted to make clearly understood in their new system of government it was that the function to make law would no longer belong to a king or dictator or a group of government workers, but would actually belong to those whom the people themselves have elected to office for that very purpose.

As if to emphasize this point, the Founders made this the subject of the very first sentence in Article One of the Constitution, which says: “All legislative powers herein granted shall be vested in a Congress of the United States, which shall consist of a Senate and House of Representatives.[3]

Even though Jefferson was himself a lawyer, he knew that the common people must be able to clearly understand the law they were required to live by. He said:

“Laws are made for men of ordinary understanding, and should therefore be construed by the ordinary rules of common sense. Their meaning is not to be sought for in metaphysical subtleties which make anything mean everything or nothing, at pleasure.”

The Supreme Court has been of two minds regarding the status of aides. In Gravel v. United States[4], the Court granted derivative immunity to an aide for functions which would have been protected if performed by the member personally, for example, preparation for committee hearings. The Court emphasized “that the day-to-day work of such aides is so critical to the Members’ performance that they must be treated as the latter’s alter egos” lest the purposes of the immunity are frustrated. [5]

We may conclude it by stating the American Congress has more power than any legislature among the world’s modern democracies. The parliaments of Europe are often “arena” legislatures that provide a forum for debate on policies proposed by a powerful prime minister or president. Only the American democracy enables its legislature with the critical role of setting the lawmaking agenda. As the powers and functions are clearly mentioned under the US constitution, there are limitations imposed to control the power of the US Congress.

The reason for empowering huge powers for US Constitution is because they are elected by the people of the country and responsible for the welfare of the people at large. And the reason for imposing limitations on the powers and functions of Congress is to hold the Separation of powers between legislative, executive and Judiciary, and Federal system of governance adopted by the US Constitution, that is to hold independence of State governance.

[2] I. Bogdanovskaia, “The Legislative Bodies in the Law-Making Process” Available Here

[5] I. Bogdanovskaia, “The Legislative Bodies in the Law-Making Process” Available Here