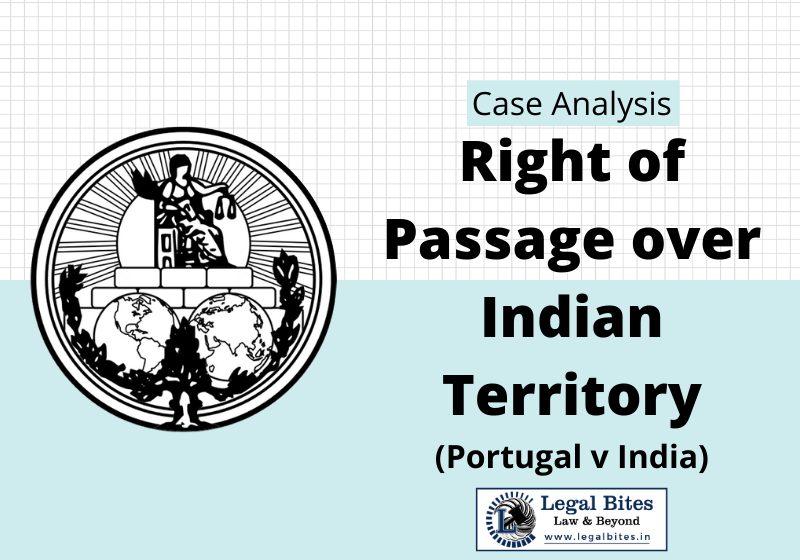 The Portuguese Government claimed that there existed a right of passage over the two enclaves encircled by the Indian territory- Dadra and Nagar-Haveli. Further, they wanted freedom in exercising their sovereignty, subject to regulations and control of India. This article dives into the many complex facets of this case and the history associated with it.

I. Facts of the Right of Passage Case

The Portuguese Government filed an application in the court, dated 22nd December 1955 which stated that in July 1954, as opposed to the practice previously being followed, India prevented the Portuguese government to exercise the right of passage.

Thereafter the issue arose and had to be addressed, as Portugal was put in a position where it became impossible for Portugal to exercise its own right of sovereignty over the enclaves.

According to Article 36 (2) of the International Court’s Statute, stated that the former court possessed compulsory jurisdiction with regards to the issue at hand. Hence, Portugal on 19 December 1955 made the declaration and filed an application to the ICJ on the 22nd December 1955.[1]

II. Overview of the Judgment

The preliminary judgement was delivered on 26 November 1957, where India challenged the jurisdiction of the Court. The preliminary objections brought forth by India was rejected by India and joined the other two to the merits of the case.  On 12 April 1960, the Court rejected the two remaining objections and a second judgement was delivered which on the claims of Portugal.

III. Issues before the International Court of Justice

IV. Analysis of the Issues Brought Forth before the International Court of Justice

Portugal asserted that India was under the obligation to allow Portugal to exercise its sovereignty over Daman and the enclaves, and thereby exercise and act in concord to the same rather than curbing the right to passage. In order to substantiate this claim, Portugal relied on the Treaty of Poona of 1779 and on sanad (decree) which was issued by the Maratha ruler in 1783 and 1785, to establish that it possessed sovereignty over the enclaves.

India objected the claim on many grounds, India alleged that the Treaty of Poona 1779 referred by Portugal in its application was not validly entered into and there existed no treaty binding upon the Marathas. Further, India argued that the validity of the treaty terminated in the last quarter of the 18th century and that the practices and procedures developed gradually.

India further argued that the Treaty of Poona and the two sanads of 1783 and 1785 did not form to delegate sovereignty over the assigned villages to Portugal, but solely confined upon it, with regards to the villages, a revenue grant worth 12,000 rupees per annum also termed as jagir or saranjam.

The expression quoted in the two sanads in addition to the relevant documents creates a nexus and proves that the Portuguese solely had a grant on revenue tenure known as jagir or saranjam of the value of 12,000 rupees a year, which was a very general form of a grant in India. It was argued that the Portuguese were allowed and given authority to put to an end any revolt or rebellion in those villages and that this was the indication that they were granted sovereign power over the assigned villages.

According to the Court, this conclusion was not apt and believed that in case this authorisation is true then, the Portuguese would possess the power on behalf of the Maratha ruler and would owe him a duty to suppress any revolt or rebellion in the village against his authority. Hence, the Court deemed that through the Treaty of 1779 and the sanads of 1783 and 1785, the intention of the Marathas was solely of jagir or saranjam and no effect lies with regard to the sovereignty transfer over the villages.

Portugal’s claim of right of passage was solely confined to the exercise of sovereignty over the enclaves without any privilege and subjected to the authority and regulation of India. Another important question before the court was the prevalence of rights with regards to various categories, such as private personnel, civil officials, general goods, arms and ammunition, armed forces, which was also regarded as a crucial decision for both the states.

The Court henceforth concluded that private persons, civil officials and general goods had been permitted and followed a uniform practice, during the British and Post British periods, this existing practice allowed free passage between Daman and the enclaves. The evidence of the prevalence of this customary practice is absolute as it has been consistently followed over a period which extends beyond a century and a quarter, without any changes in post-Indian independence. The Court, therefore, was of the opinion that there existed a correlative obligation.

The Court, therefore, gave the ratio that Portugal in the year 1954, did have the right of passage over the Indian territory between coastal Daman and the enclaves and between the enclaves, in relation to private persons, civil officials and general goods; subjected to control of India and confined to the extent which is necessary by Portugal to exercise its sovereign powers over the enclaves. [2]

In relation to the second issue in question, with regards to the right to the passage of military personnel and arms, the scenario was considered different. It was observed by the Court that during the British period up to 1878, the passage of such armed police and arms and ammunition between the British and Portuguese possessions was managed on the basis of reciprocity.

There existed barely any difference which appeared in relation to the same, with regards to the passage between the geographical area of Daman and the enclaves. There was nothing that depicted that the passage of armed forces and police between Daman and its enclaves or between the enclaves was allowed or exercised as a matter of right.

The Treaty of Commerce and Extradition of 26 December 1878, in Paragraph 3 of Article XVIII, which took place between Great Britain and Portugal laid down that the armed forces of the two Governments should not infiltrate the Indian dominion, however, exceptions were allowed in case they enter for the purpose which was listed in the former Treaties, or for facilitating mutual assistance which was provided in the Treaty, or in the result of a formal request made by the Party who wishes to enter.

Subsequently, the British and Portuguese authorities in India depicted that the provision is applicable in relation to the passage between Daman and the enclaves. Paragraph 4 of  Article XVIII of the Treaty of 1878 stated that the export of arms, ammunition or military store from the jurisdiction of one state to the other “shall not be permitted, except with the consent of, and under rules approved of by, the latter”.

Portugal was of the opinion and argued that there existed twenty-three occasions during 1880-1889 when the Portuguese armed forces had traversed the British territory between Daman and the enclaves without a permit. In relation to the same, the courts also noticed that on December 1890 the Government of Bombay conveyed to the Government of Portuguese India a complaint stating that:

“Armed men in the service of the Portuguese Government are in the habit of passing without formal request through a portion of the British Pardi taluka of Surat en route from Daman to Nagar Haveli and back again. It would appear that the provisions of Article XVIII of the Treaty are thus violated.” [3]

The mandate for a formal request with regards to the passage of armed forces was consistently repeated in the agreement of 1913. In relation to armed police, the position was parallel to that of armed forces. The Treaty of 1878 maintained the passage of armed police on the basis of reciprocity. According to Article XVIII, Paragraph 2 the Treaty encompasses provision for the entrance of police authority of the parties into the geographical territory of another party for particular purposes, for instance- in order to search criminals and identify personnel who deal with smuggling and bootlegging activities, on a common basis.

In the year 1913, an agreement was established for mutual compromise of armed police to pass over the geographical and jurisdictional territory of another party, provided that a previous notice has been supplied to that party. In the year 1920, an agreement was furnished that affirmed that armed police below a particular rank should not traverse into another party’s territory in the absence of consent or without a permit.

In the 1940 agreement, the passage of Portuguese armed police entering into the Daman-Silvassa (Nagar-Haveli) road was permitted, however, there was an additional proviso stating that this was only acceptable when the party did not exceed ten in number and additionally, a notification was delivered to the British authority within the time span of twenty-four hours of the passage. Further, there were no changes that took place during and post British period in relation to the armed forces and armed police.

Thus the courts observed that the Portuguese armed police and armed forces did not pass between Daman and the enclaves during the British and post-British period, till the year 1878, when prior authorisation was required for reciprocal arrangement already agreed to, or in relation to individual cases, this authorisation was previously acquired by the British and later by India.

Therefore, there existed a translucent distinction between the practice of allowing the free crossing of private personnel, civil officials and general goods and the requirement of prior notice regarding the crossing of armed forces, armed police, and arms and ammunition.

The Court was of the view that there existed no right in favour of the Portuguese regarding a mutual obligation on India in relation to armed forces, armed police & arms and ammunition. In relation to the passage of these listed subjects, there existed no such right between Portuguese and the British authorities. This practice was prevalent initially by the British authorities with prior intimation and this was recognised later as well, during the post-British period. [4]

In conclusion, this case was considered as a definitive case of significant features. The Court considered to travel back in time and looked into the history of the matter and reviewed the relations which existed between neighbouring State, which was not confined solely by the rules but rather was governed by practice. Therefore, the court was of the opinion that there existed a custom or practice which prevailed between the two States and which was accepted by both the parties.

Hence, the predominance of the custom or practice would prevail over any existing general rules. The right of passage which was claimed by the Portuguese was subjected to complete recognition and certain terms and conditions in relation to armed forces, armed police, arms and ammunition and additionally provided India to exercise its rights and sovereignty over the intervening territory which was acknowledged by the court.